Hello folks,
I feel like I will be posting lots of Night Owls stuff for a while, until the newness wears off! Lots of  children ( and other adults ) have commented how it's much better now!! I have two colleagues. One is fantastic - same wavelength as me and she feels she can now do the stuff she's wanted to for aaaaages!
This week, we've made fun Halloween themed activity booklets, worked on Pom Pom spiders and made witches fingers from bread dough and a flaked almond for the nail!
Last night, we made these. 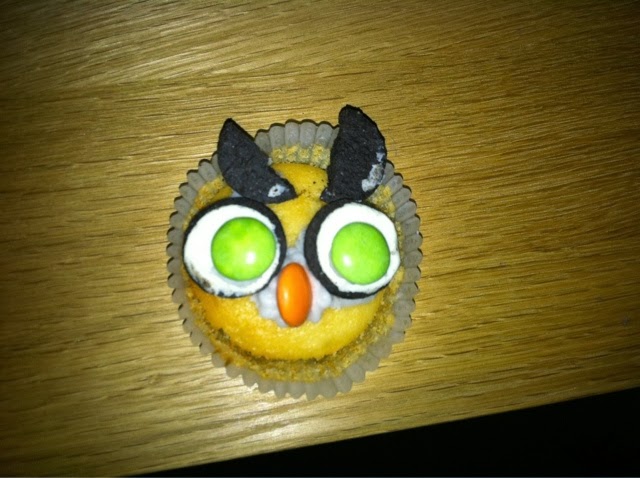 How cute! I found the idea on the old tube of you! The kids  owlets  were suitably impressed with the results and we have decided that these will now be our signature bake for  future fundraising events!
So easy!
You need
A fairy cake ( we bought ready made due to time )
Two Oreo cookies ( we used mini ones as the cup cakes were small ones )
Three smarties
And some buttercream. ( we used a tube of ready made - only 97p from Asda )

Twist your Oreos apart ( but don't lick it!! ), and the halves  with the cream on get glued with a splodge of buttercream halfway on the cake. One of the remaining tops gets cut in half to make the ears. The other top is for the cook! ( NOM ) . Those half cuts get glued in place for the ears. Smarties are glued on for the eyes and stuck in sideways for the beak! Done. Simple but so effective!!

I've my eye out now for owl themed crafts! Watch this space. Already have felt owls for sewing in the pipeline!

Must dash now, because I'm working at Early Birds too this morning!! ( the before school breakfast club) - thank goodness it's half term! Roll on 5:29pm!