School dinners - Then and Now

THEN ( This colour represents my rose tinted glasses that I am wearing whilst writing this post. )

At Primary School my 'school dinners' relationship started on the very first day when I came home and reported that we'd had big black stones and custard. I now know of course these to be prunes! My mum told me that I'd eaten the custard and left the stones! I think that would still apply today!

Throughout school I recall a mixture of having school dinners, coming home for lunch and taking a packed lunch.

NOW
I work at the same school that I attended and whilst the hall is EXACTLY the same, bar for the new floor replaced only three years ago, the kitchen has been slightly modernised so our meals are now made on the premises. NONE of the children go home for lunch and most eat a packed lunch from home.

THEN
When I was there, as a patron of this fine dining restaurant, the meals were delivered from a central canteen and placed in warming ovens till service.  I also remember the pig swill wagon coming to collect ALL the waste food.

NOW
The waste is just bagged up into black bags and placed out for general rubbish collection. I find this incredible that a) it isn't sorted into raw veg peelings etc for compost and b) Our council does have a food waste collection recycling service now - so why not include our school?


THEN
We always had a main and a pudding and free access to jugs of water. We had tiny little GLASS glasses and we ate off white bone china ( it's what I was told at the time by a dinnerlady! ) and solid silver cutlery!( the same dinnerlady. ) I don't recall anyone smashing things or being cut to ribbons by the sharp cutlery.


THEN
The mains were less memorable I suppose. I think we had what we were given! No choices. I HATED fish days. Hideously watery yellow fish rectangles served with an ice cream scoop of smash. ( It probably was real potato but hours of keeping it warm transformed the taste and texture into thick gloopy stodge.  I remember my friend and I used to either spread the food really thinly round the
plate or hide it under our knife and fork. We went to collect our pudding after we'd been cleared to remove our plates and scrape it into the big trough ourselves. We had to wait to leave the table until our plates had been inspected! The dinner hall was also patrolled by the Headmaster, who paced around with his hands behind his back reminding us not to speak with our mouths full, not to shout  and not to point. EVER.  He let us know which one of us he was speaking to shouting at by pointing at us. We were also allowed to go for seconds! It also caused great excitement  on the rare occasions when we had milkshakes! Green or Purple milk went down a storm!

NOW
In a similar system to the one demonstrated at the fantastic BLOG by Veg at Never seconds http://neverseconds.blogspot.co.uk ; every day, the children at my school now get a daily choice and are given cards to present so they never ever have to have what's left. The school operates on a three weekly menu very similar to the one pictured here - 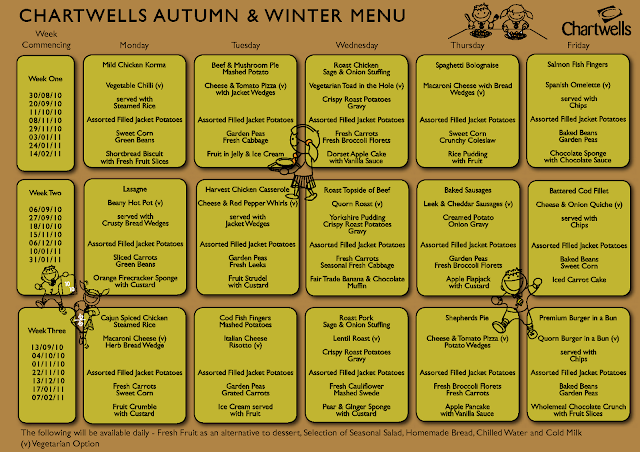 
with each day having four choices. Always a meat dish, a vegetarian option, jacket potatoes available daily with a choice of fillings and the option of a school packed lunch. Thursday is a popular day with my current base class as it's roast dinner day! they sure love their roast potatoes and Yorkshire puddings! It's good because parents can just pay on the day too - no advance ordering. Salad and bread is available freely. Fresh fruit is always an option as an extra to dessert. Portion sizes are a bit stingy I think ( even though we are tackling childhood obesity these days ) and there are never calls for leftovers too be distributed as seconds as each meal is ordered. The card system works very well and rarely is there an occasion where a child cannot have the meal they ordered. They are also allowed milk as a drink choice every day. Plain milk - not green or purple! Not a food colouring in sight.

THEN
I don't think I had a favourite main meal. I recall we had pilchard pie which I think I liked. The meat and potato pie was made with horrid grey gristle. This was the 70s remember. Times was hard and we were second class citizens! ( Quite rightly so!! ); there was the horrid fish dish, chips - when we had them were soggy, but we could put vinegar on - out of real  cut  crystal glass vinegar decanters ( That dinner lady was very posh! ) My very very VERY  VERY favourite was chicken supreme. That was delicious.

NOW
The children seem to love the roast dinners the best, closely followed by crunchy chicken wraps and the curries. Puddings  desserts tend to be healthy fruit based yogurts and muffins. Not a great deal of choice really compared to what we had.

THEN
The puddings. I think I put up with the mains ( except the Supreme ) just to get to the puddings. We had: great thick cuboids of chocolate sponge served with pale green mint custard, great thick cuboids of vanilla sponge served with chocolate custard. I liked those. On the dislike list was the HUGE dishes of semolina with a blob of jam in the middle. YUK. School rice pudding was awful too. The big black stones were to be avoided also. But my ULTIMATE BEST DISH OF ALL TIME WAS
Manchester Tart . Served in large rectangular slabs - the soft delicious pastry with jam on covered in the thick yellow wobbly custard with a glace cherry on and a sprinkling of coconut. It was blinking beautiful. So delicious. Mouthwateringly yummy!

Imagine my giddiness on the rare occasion we arrived at the queue to find that it was a Chicken Supreme  AND Manchester Tart day!

NOW
Well, yesterday to be exact, I made a Manchester Tart. Only mine was round, not rectangular! I made it from the memory of what it used to be like! I made a sweet pastry crust, pricked its bottom and blind baked it till golden. When it was cool I spread a thin layer of raspberry jam over the base and I made a thick thick custard using Bird's Custard powder - a fancy pants home made egg yolk and vanilla infused cream concoction would not do - which was then poured onto the jam base and allowed to set. Dessicated coconut and a glace cherry was added!