I was working in school last week. The first time we had enough Childers in to warrant pods- what we are calling the bubbles the govt decreed. We have four pods each manned by two staff. Reception, a Y1/2 pod, a Y3/4 pod and the one I was in- Y5/6
Strict guidelines are in place to ensure the pods never meet and with a maximum of 8 in each the 2m rule has been fairy easy to ensure in the oldest pod, less so in the others and practically impossible in the younger end. It was a long week and I was shattered on Friday night.

I had a go at sewing a face covering, following a you tube tutorial and using some filter fabric from my friend. That I ironed! I messaged her with a most indignant oh my goodness why did you not tell me this happens....only for her to reply with the photos she'd sent me a couple of weeks ago, of the exact same thing! Old age memory failure is hilarious sometimes. This one is for Mr 23, who declined the Mickey Mouse fabric I'd picked out for him! It's too small and too tight,  have a different pattern to try, with metal nose bridge piece - today's project. 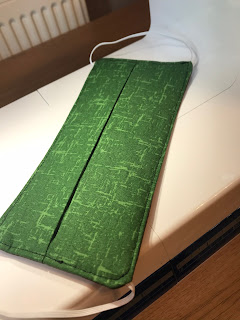 On the needles is the little matinee jacket I've started for my future grandchildren, should I be lucky to be blessed. 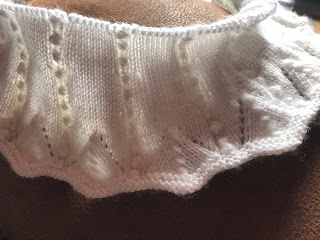 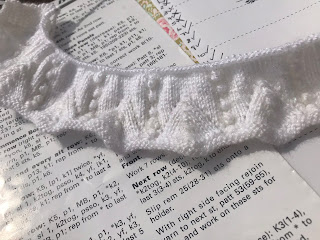 We found a couple of new TV programmes to watch that we thoroughly enjoyed. One is called The Bidding Room, which is hosted by a very suave Nigel Havers in a very alarming pair of white trainers. It's a bit like Dragon's Den meets Antiques Roadshow. Also a bit like the Four Rooms programme that was on ch4 a few years ago. It's an easy watch.
The other might not be to everyone's taste but it's the BBC again  called  The Other One. It had us laughing out loud at a lot of it.

So this week I am working from home and will be doing a lot of online learning from a Website called Creative Education - go have a look, there's a lot of free content. I'm going to have another go at face coverings - a different recipe this time. Meals planned for the week include a baked chicken pasanda, a beef stroganoff, vegetable chilli and a Freezer surprise one night. It's much easier to get online deliveries at the moment and Iceland are desperate for me to order as I'm getting daily emails with lots of good offers - it's a pity my freezer is full!

On Friday, I socially distanced walked home with a friend and when I got home the HG was waiting for me on the doorstep - not demanding where I was to cook his tea or anything! Anyway, my friend carried on her way and after a good half a minute, I realised I was waiting for the HG to GET 2m BACK out of my way so I could get in the house!!! I was mildly irritated at the same time that he didn't automatically do it!!  That's what effect a week at work with human beings had on me!! 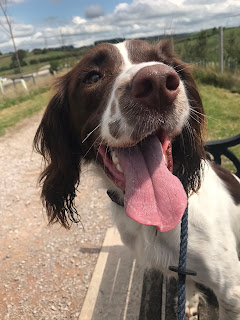 I took Bluebell for a long walk on Saturday before it got too hot, then we hid indoors for the rest of the day as the neighbour's - lovely but loud - held a party for their sweet little 2 year old. A combination of sunshine and wine! They were absolutely hammered- we did go out and socialise a bit but it was just too hot for the dog. She was a little but alarmed by the noise too! They were very quiet yesterday and I was laughing with them at how rough they were! They'd had a lovely day and I'm glad the weather held out for them.

I finished the London Jigsaw after a I cannot believe it there is a piece missing moment - It was stuck inside the little booklet that was in the box. I was supposed excited that Hobby craft finally had the puzzle board in stock that I wanted and currently I have a Christmas Jigsaw just started on it! 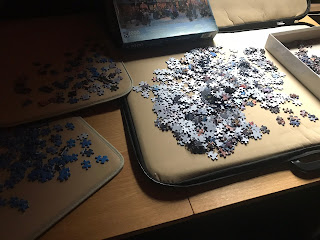 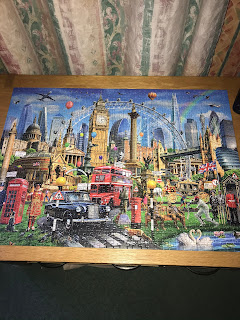 It's been very hot here and it's supposedly going to be cloudy and rainy today - quite the opposite so far. Not much washing to do so will save it. Blueberries and pear with yogurt for breakfast. Someone white and floofy has already had hers and us now snoozing on my knee. The HG went to work ages ago now and I've only had one cup of tea. Must remedy that. His packed lunch today was one peanut butter sandwich on wholemeal bread and a grated cheese and beetroot on wholemeal as the main event. Thrilling news eh?!

Rachel* happy to be mundane* Radiostar xx
Posted by Rachel Flowers at 08:14 4 comments: