So, with my swanky new iPad I was gifted on my birthday, by the HG I thought I’d try a few shots in the garden. I think the camera is fair to middling good, here’s the few quick shots I took. 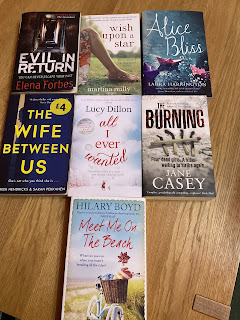 First a batch of books to go at. I’ve picked ‘The Wife between us’ to read first. I wonder if it’s going to be like another book I recently finished called The Wives by Tarryn Fisher. I’ll let you know.

Second, a few of my favourite flowers.I absolutely love platycodons - got some started from seed that need transplanting already! The first one is a plant I’ve had for years and the second plant is one bought for me by my best friend for my birthday. 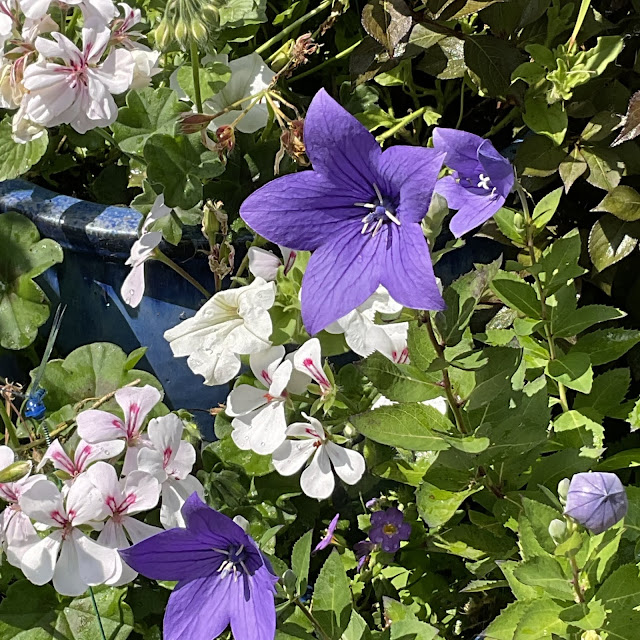 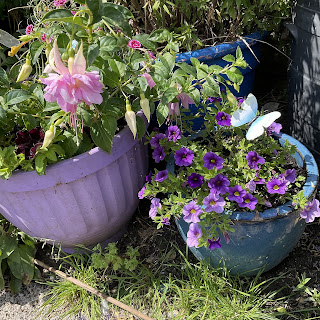 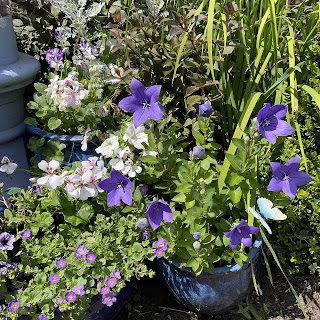 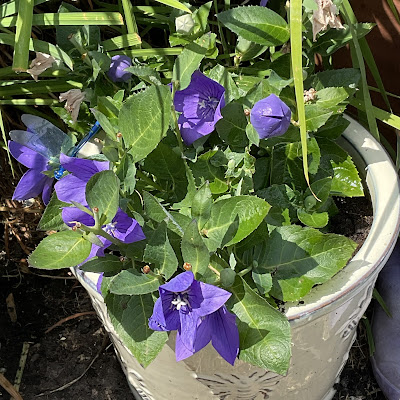 And of course, we couldn’t possibly not have a few of Bluebell…. 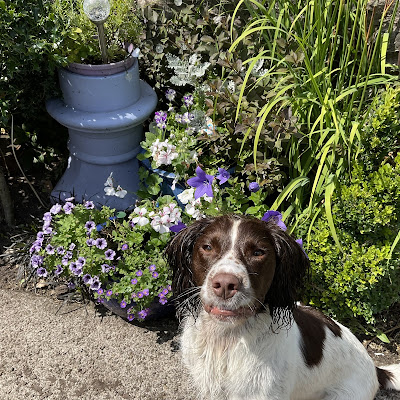 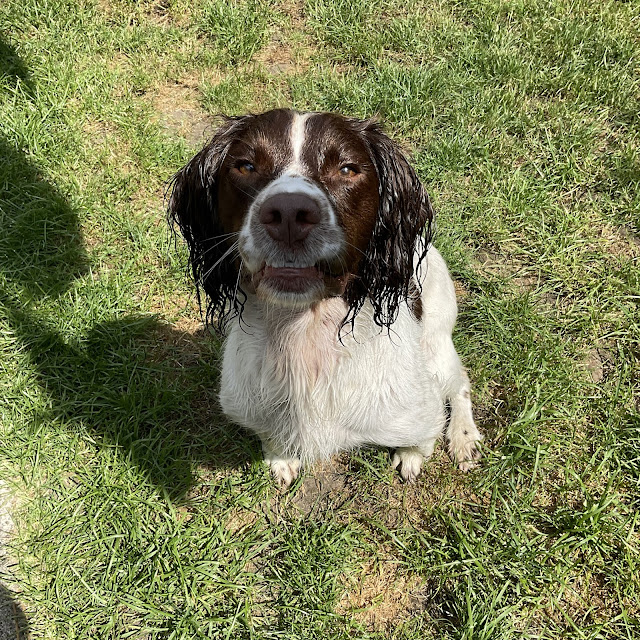 Finally a picture of the blue leather bag from Miss27 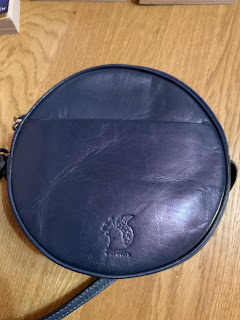 So that’s just about it from me for today. It’s been a quiet day. Mr 24 took Bluebell for a wander this morning whilst the HG and I went to his Mum’s where I helped her to have a shower and wash her hair. She says it feels lovely. She seemed a bit ‘far away’ this morning. We were watching the Olympics with a cup of tea before we left at lunchtime. But she wasn’t really actively watching , just appeared to be in a world of her own.

We popped to Sainsrobbers on the way home for some bits n bobs. I got a nice big tub of coleslaw on offer and a turkey breast joint yellow sticker. We had lovely sandwiches for lunch and once I’ve put this blog down I’m going to start reading my book. The Olympics is on in the background. Yesterday I said I was getting sporty in my old age, by that I meant I’d enjoyed watching the Lions beat the Springboks and then we watched The Hundred cricket.

Am starting out of the midday sun as when out for lunch with the girls on Wednesday, I burnt my shoulders inadvertently. I think it was because of the wine! It must have been a good lunch right? Met at 12 and home by a very respectable 8.30pm.

Hope all is well in your world,

Email ThisBlogThis!Share to TwitterShare to FacebookShare to Pinterest
Labels: .

Halfway to 100 and then some: edited

Well this time last week  month I was still able to say I'm in my mid to late 40s despite being eternally 28!

I'm putting it down here for posterity because who knows when I will forget the memories.

It was on Friday just gone - the same day as the day I was born, making me loving and giving if you believe the rhyme and I arrived at almost 11pm after 3 days of labour for my Ma. I was 7lbs 7oz and the 7th grandchild on both sides! Not sure if I was early or late - I will find that out. Mums had a fortnight in hospital back then with enforced bedrest and us babies were in big nurseries. Dads were not allowed in.

I was at work on my birthday and it was wonderfully brilliant. The childers were all wishing me well and some made me cards - the wordings made me howl with laughter. One little chap told me I looked good for my age hahahaha The staff has given me a pandora voucher which I will spend on a pretty silver ring and cards and gifts a plenty. I made caramel buns with fresh cream toffee ripple topping and a M& S caramel filled chocolate button on the top. The school cook made me a Bluebell themed cake which was a sticky    toffee pudding cake along with some muffins to share amonst the staff. They illegally gathereda and sang happy birthday to me and I wafted out my candles with my birthday card! Covid friendly. I also put some chocolate biscuits in the staffroom too. Think gannets or locusts and you'll know what we are like! It it's on the staffroom table then it is fair game.

So many presents and cards to open and messages off friends. I had not planned a party because I did not trust that all would be open on June 21st so becuase Miss now 27 was home it was just us 4, together in our pjs and we ordered in a lovely very naughty MacDonalds! No washing up and strawberry milkshake!

Presents from the HG included ( I am such a spoilt madam )  Luna Lapin Summer Subscription Box, some FAST 800 books, a brand new ipad, a cover stitch machine and an electric toothbrush ( this was the only thing I'd actually suggested when prompted with the what do you want for your birthday requests ).

My daughter bought me a beautiful blue leather handbag, some hilarious springer slippers and  a beautiful bone china mug amongst other things, My Son bought me a tracking device for my keys and phone etc and a lovely case for my new ipad and some thoughtful anti wrinkle anti aging face pack treatments! I got money, jewellery, smellies and chocs too. One of my best friends had a photo of Bluebell etched into a silver keyring for me, another of my best friends ( Thanks Barb! ) had a photo of Bluebell taken from this blog made into a chunky wall hanging and another of my friends bought me a little silver commemortaive  basket. Very spoilt. My daughter made me the most delicious white chocolate eton mess cake and we had a very lovely time of it. 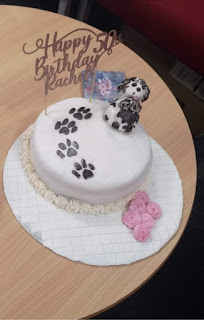 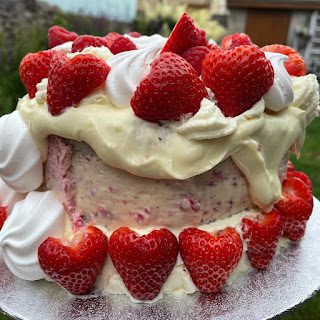 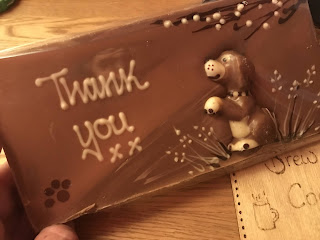 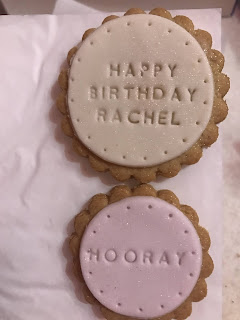 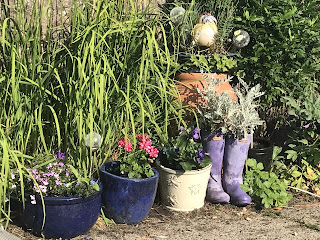 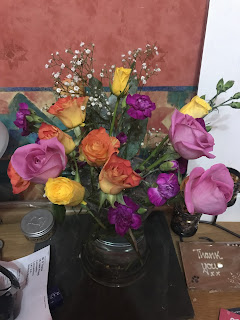 The post was edited because it is now 18.11pm and we are watching the Lions battle the Springboks on Saturday July 24th,

Thankfully the weather broke a little and it wasn't as crazy hot as it has been of late. We went to see the HG mum, sadly diagnosed with vascular dementia and alzheimers at the beginning of lockdown, but it was via a phone appointment via my sister in law. It's been very hard for her and the HG to find things out and what's what but there are now carers in place to basically ensure her meds are taken twice a day and to check up on her and help her with meals. When she's had an 'episode' or been dreaming as we say it to her, she gets very distressed as she thinks she has lost the children and has gone to look for them. She also gets worried because her husband isn't home either etc. I reckon it's about 20 years plus is the step back that she goes. It's awful to know that this is incurable and she will only deteriorate.  Because we work full time, the HG sister and her hubby do 99% of everything and I do what I can. I've started to help her have a shower as her hip should really be getting replaced and she is very unsteady on her legs. Unfortunately, as is often the case, it's her primary problem at the root of it all - she has AF - and this means she isn't fit enough for the operation.

So the first time, she got into her dressing gown in her bedroom, came into her teeny tiny bathroom, stepped up on the step and held the grab rail and stood in the bath. Then I closed the shower curtain and she disrobed. Successful shower and she got dry behind the curtain and re dressing gowned etc.

Fast forward a few weeks. She's practically skipping butt nekkid with gay abandon into the bathroom with me having to quickly shut her kitchen door so the neighbourhood doesn't get an eyeful. We have laughed ourselves silly at this. I don't even 'see' anything and she says she never thought she's have her daughter in law do this but she says I'm that good at it, I should get more clients. I say they couldn't afford my rates! Today we've been at sat and watched some of the Olympics with her and it was almost like nothing was wrong. Just the tell tale signs, zimmer in room, chair and sofa on stilts, carers handbook etc.

School finally finished on Tuesday. I am proud to say I've not had to self isolate once and out of the whole school, only two classes had to go home in the final two weeks. I was so lucky and thankful to receive some lovely end of term gifts and cards. I love the handwritten ones from the children. I will go back again in September I guess.

Going to draw this to a close and find some photos. I've brought a stack of books to read from my Ma in laws. I'm halfway through making a pinafore for my daughter now Miss 27. I was going great with it until I discovered my beautiful side seams were useless as I had sewn the front UPSIDE DOWN! durrrr. A little bit of knitting on the needles, a little bit of hand sewing and my garden is looking good!

Signing off differently from now on.