Today I have been mostly faffing about with my best friend’s birthday present. It’s a made by me using denim from brand new jeans found in charity shops. I’ll show you sneak peaks! Hope she likes it. I’ve spent hours on it but mostly because it’s been interspersed with me sorting out my bobbins and spools for a good enjoyable hour…. 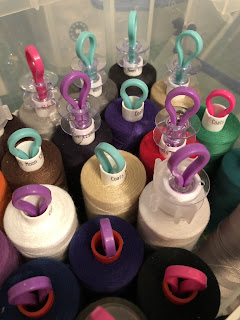 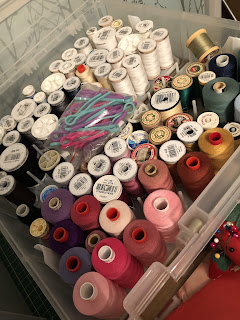 Then hunting for the protective tip of my little sharp scissors…. 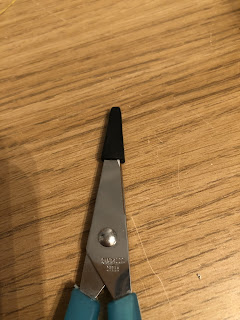 Then I faffed about folding and oohing and aaahing over some fat quarters….. 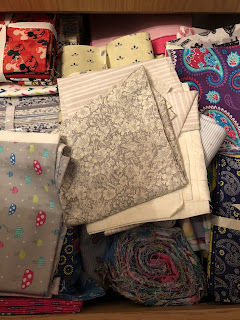 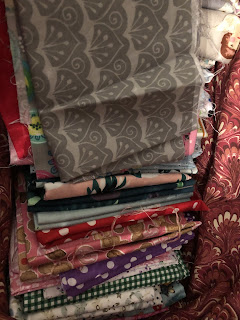 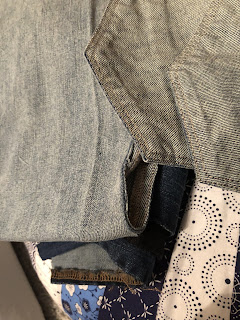 I’ve looked at the newest dress pattern I bought and some bargain £2.50 per M fabric I got to make it out of…. 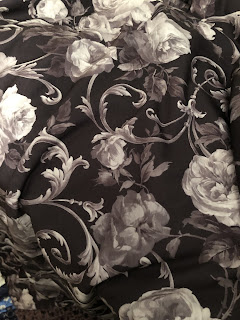 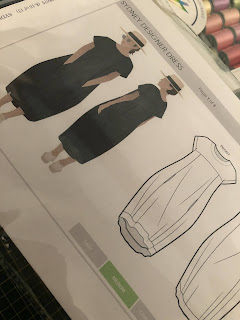 I hunted out our birthday card we have sent back and forth since 2013 when I started it off. I love just re reading the little greetings each year. Her writing is so much neater than mine as I’m usually scribbling it last minute as we have to make sure we put it away safely for the following year… 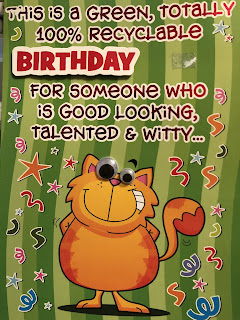 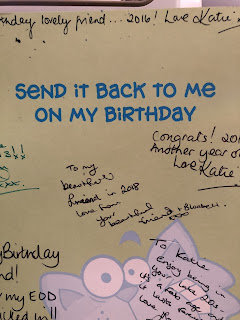 We love this tradition so much that this year we are each going to select a Christmas card to send each year but we will give it back in January. I claimed I already did this last year with a very lovely card reserved for special folks! She claims not! So we will start it this year.
I’ve sporadically  been downstairs to get a cup of tea…in my lovely birthday mug from Miss 27… 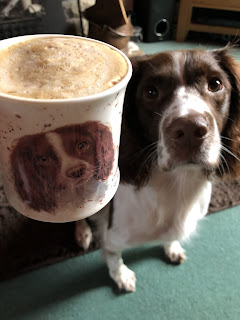 We’ve taken the dog for a walk and I popped in the Spar for emergency bread, milk and frangipan mince pies ( what???? ) until I go to the shops tomorrow.

Mr 24 came home from work early Wednesday afternoon, looking, sounding and feeling dreadful. High temperature and a very rapidly developing rash. I pressed the spots hard with a glass and made him look at the lights ( done this since he was a baby!! ), I then googled it and the 4th most common covid symptom is a rash - looked at the photos, looked at my son, yep must be covid. He’d been to a gig in Manchester last Sunday so the timeline made sense. However the two LFTs and a PCR all came back negative and he fully recovered- so t’was just a virus and he will be back at work Monday.

So the present is still underway… 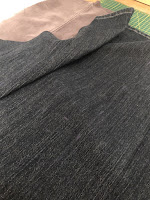 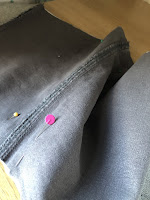 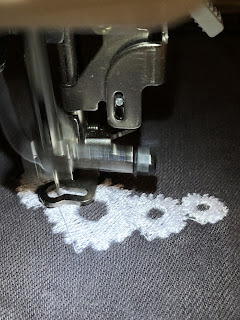 It’s taken me longer to do because I’ve changed my mind mid make so many times and have decided to line it too and add extra embellishments!
So many crafts, so little time! Am on with making an otter. Have done his jumper - photo next time …
Am particularly proud of my pouchy muzzle! 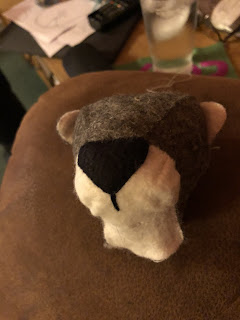 He’s hand stitched and is actually called Ottoline - a girl. But mine will be a boy! It’s one of the Luna Lapin friends. I’m lucky enough to live close to the shop and have met it’s creator a number of times now. It’s a really special friendly group of mostly middle aged women!!
This post is coming to a close now because the embroidery bit of the design is finished.
Till the next time. That’ll do.

Thanks to some planned building works, I’ve the luxury of a glorious two week half term! The days we are already paying back in evening twilight sessions and coming in in the holidays etc. we are ( allegedly ) getting a new infant toilet block! It will totally change the layout of the school which has been the way it is since the day it opened! I’m going to be honest - I won’t like it! I do not like change!!

Work - I am running a full time nurture class with my other half at work. The charges are very challenging. If you want an insight into my work life right now, I urge you to watch Don’t exclude me on BBCiplayer. Specifically ep 2. I was absolutely glued thinking I was glad everyone had the chance to see this. The troubled kids on their didn’t even have half the early life trauma of the little chubs I’m currently trying to help. Me and my work wife as we call each other affectionately call our room Shark Tank on account on how many times we get bitten every day! We have many a ‘Mexican stand off ‘ as we call it regarding such situations where one little shark wants the red cup, but they’ve been given a blue cup. 20 minutes is the longest so far! The progress we are making to the outside world is one nano step forward, 57 giant steps back but our little one who likes to escape, has not left the room or attempted to. Of course now I have crowed about that, plus with the two week break, we will be back to square one! We’ve one almost non verbal who is putting words together now and all are enjoying our daily stomp along to The Proclaimers 500 miles! We work a lot on proprioception and sensory diets. Mostly we are flying by the seat of our pants!! ( not really ) but it is busy and full on and I was glad of the rest when Friday came. I was actually off sick Thursday Friday with horrific and brutal efforts by my body to rid itself of my insides to put it delicately. To be honest, I think I got off likely considering the closeness and questionable hygiene habits of my worklife right now!! I’m right as rain again now but did feel ropey as anything.

We’ve seen Miss 27 ( she is getting old ) a few times over the summer, the last time was two weeks ago. We went to the Lakes to meet them on their way home from a holiday. Had a lovely coffee in a doggy cafe and Bluebell and Freddie drew many an admiring glance in their matching jumpers. 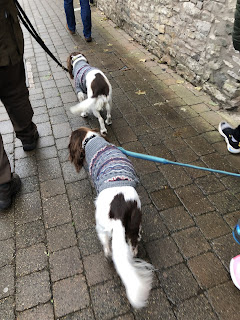 As I write she is snoozing on her Dad’s chair.

It’s raining and we are not flooded like those a bit further North. Ooo that reminds me!! Guess what?

My HG was working at a house in the Lakes and was chatting away to the lovely lady of the manor. Something he said triggered her memory and he was asked if I was Rachelradiostar with Bluebell!!! I messaged her and we chuckled about what a small world it really is! That’s three bloggy chums now to have touched my real life for sure.

You down south who just moved next door - I loved you first!! You in Manchester now sans le caravan you were my second!! 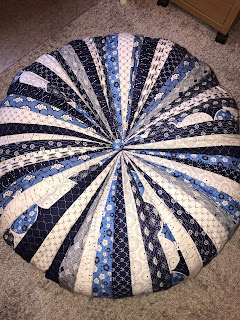 I’m on with three or four little different projects.

I’ve just finished listening to the sequel to The Handmaid’s Tale - The Testaments by Margaret Atwood. A really really good listen - made better by the fact the actress who plays Aunt Lydia reads that part!

I’ve now got ‘Us three’ by Ruth Jones lined up. I like to listen as I cook or see.

Cooking - did braising steak tonight with a fabulous Yorkshire pudding! We’ve been making more of an effort to eat less meat based dishes but tonight’s meal was shopped for from my freezer. I get my meat delivered by a real butcher on a Saturday morning. It’s all top quality and farmed less than 30 miles away.

I did bake bread last weekend PURELY to avoid having to leave the house and go to the shops. Sadly I’m now out of bread flour. 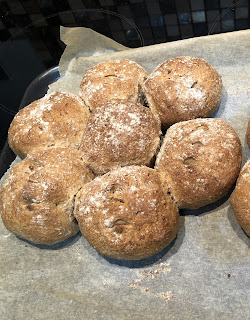 There’s a new kidney post up for anyone following that blog. I’m having a probably permanent twitter break. I spend a lot less time online for fb and ig so maybe I will find time for my blog! Can’t think what else I need to document. Super forgetful. Think it’s my age!!

Right will try to add a few photos and leave it there for now.