Its been a lovely weekend.
The BBC's 'Game of Thrones' style Six Nations video is just genius. I can honestly say, the TV coverage of Friday night's opening game betwixt my Wonderful WALES and the English was actually outstanding. It relayed the atmosphere magnificently. You all know it's my dream to actually get to the Milennium Stadium one day to watch a game, but the BBC transported me there in my own living room.

It was a fantastic game, and even though it wasn't the result I'd hoped for, whatever had gone on at half time in the English changing room worked. They came out and trampled all over us!
The Italy Ireland match, for me wasn't as exciting as the following France Scotland game.  This was the match that had me shouting very bad swear words at the telly. Bad swears. All the swears. The Scots proved formidable, just not enough luck went their way. I hate the bloody French!! I love the Six Nations!

The Uni one has been home since Thursday and it's been lovely. The house feels right with four of us in it. She's been sorting through some of her childhood treasures. Unearthing the full set of Percy the Park Keeper magazines we used to get her! Probably at least £300 quidsworth! You know the ones, get the first issue for 99p and then sign your wages away for the next 145 issues else your child will be scarred for life and never ever forgive you! I love Percy the Park Keeper.

Last week it was all about cooking beef low and slow. This week, thanks to me salivating, ok actually drooling at Jamie Oliver's pork shoulder on his Friday Night Feast programme last Sunday ( I was watching on catch up! ) we had overnight roast pork shoulder. Except I didn't do it overnight. I did it all day Monday! I know. I'm such a rebel. But the best bit is that my massive pork shoulder cost me less than £4!!
The HG and I had called at Booths and we noticed the lile shop boy working his way down the fridges with his little yellow sticker price gun. I'd already seen the last piece of pork shoulder on the shelf. It was already half price at £7.50. BUT it had no days left on its use by date. So we sauntered round. I could have picked it up and asked him to reduce it but I didn't. ( wuss )
Instead, I bumped into an old friend and stood and chatted for aaaaages! When she went to the till, I dispatched the HG to the meat fridge to see if it was still there. No, it had gone!! I scanned the aisles for the customers who had picked up MY shoulder! Fear not, it had been reduced and it had been put into the reduced bit of the fridges!! Cackling inwardly ( and maybe a bit of outwardly smugness ) it was MINE!!! 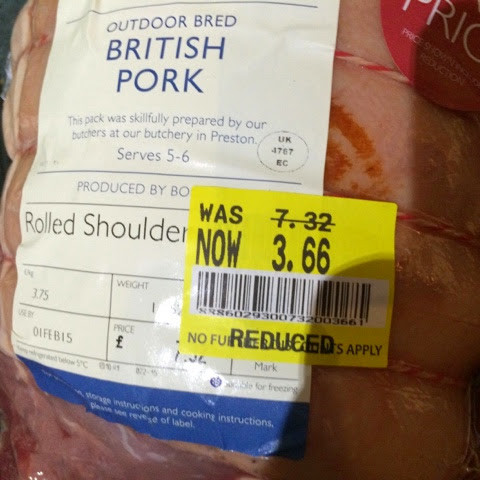 So here's what I did. I copied Jamie by removing the skin, and cut it into long strips ready for crackling. I've never done it like that before, but I will from now on! So easy and the crackles were perfect! Then into my trusty roasting pan went some quartered onion, carrot chunks, celery and a couple of halved apples. Oh a bendy leek went in too. A knorr vegetable stock pot cube went in. Jamie used cider, I didn't. The shoulder went straight onto its vegetable bed and it was tightly secured in foil. Into a oven about 130 - 140 fan for 12 hours. Don't look at it. Just leave it. The house, once again, smelt divine! The resultant pork just fell apart and was so juicy and succulent. 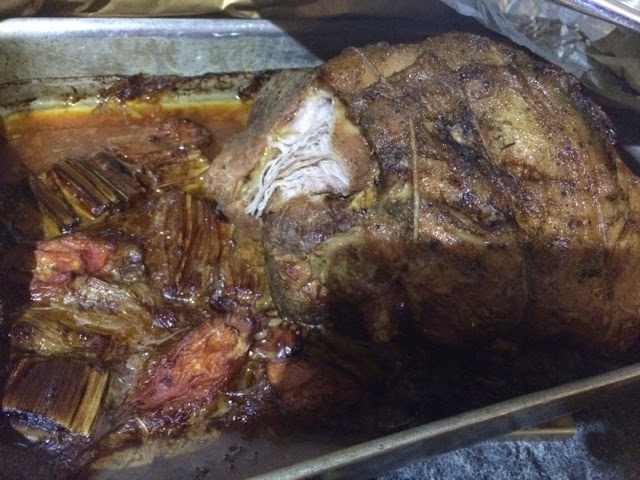 This photo does not do it justice at all! The bit of meat you can see is from where I burnt the skin off my fingertips snaffling a morsel for tasting!
There was enough for a roast dinner for Monday, Pork, chips and gravy on Tuesday, sandwiches on Wednesday and I made a pie to feed four easily on Thursday! That's in the freezer, we were a bit porked out!  All greedy pig portions too!  Not bad for under £4!!

There's one week left until half term! The first 'Hilarious Moment Of My Week' came from the daily reading session with one child I'm trying to move on with their, erm, reading! The story was called
'The little red car and the bullocks' it's quite an old fashioned reading scheme but it does the job perfectly. Of course you can predict the first moment of mirth. The 'u' in bullocks was indeed pronounced as 'o'. It was calmy and professionally corrected by a calm professional me. Inwardly I was laughing my head off! Then I asked the question, 'What is a bullock?'
The answer was ' you know, like a bullock proof vest'
I'm at this point ( on the inside ) rolling on the actual floor laughing with the picture that painted. On the outside, a calm and professional me explained the life stories of boy and girl cows. On the inside >>>> A bullock proof vest!!!!!! 😂😂😂😂

The second  'Hilarious Moment Of My Week' was provided by the same child. The lesson was RE led by the class teacher. The objective was for the children to say what the Kingdom of Heaven looks like to them. There were the expected, I suppose, suggestions of golden castles, vast green fields filled with children all happy and playing. Rainbows, big gates, blue skies, lots of loved ones there etc etc.
Not so for bullock child. Their answer~ a swimming pool full of kittens.  I have google imaged this and there is an actual picture to help you see. What the kingdom of Heaven actually looks like!! 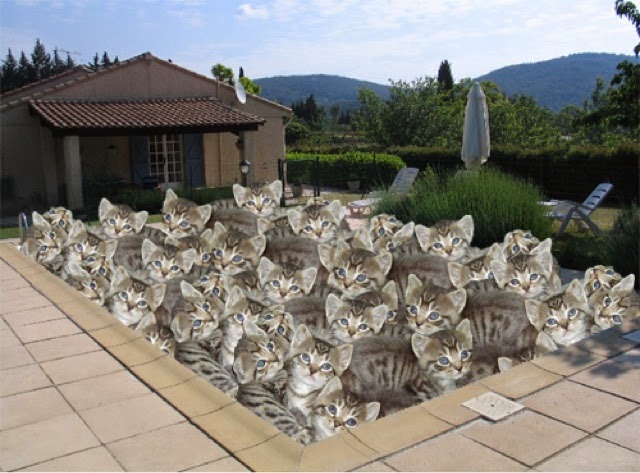 
More work related stuff now. This week was assessment week and one of the writing tasks was to give somebody at school an award and explain why they deserve that award. I, dear readers, was given two such awards!!

The reasons were extensive ( one piece of work was over a page long ) and genuine! Parts I enjoyed the most were the bit where it said how I give up my time to look after the children who can't go home because their parents are working. GIVE UP MY TIME!!!!! And how I cut the paper so their work fits in their books!! Who knew the children were so observant and how important correctly sized worksheets are to them!!

So now, when  the class teacher - who was awarded numerous awards - for being funny and a 'grate teecher'  asks me to cut the paper, we joke about my prowess!! I'm putting 'award winning' down on my CV!!

Right, much to do this fine Sunday morning. Sadly, it will involve taking the uni one back to the train station. The teen ( who passed his driving Theory test on Monday! ) has his girlfriend coming over today. I've no idea what I'm making to eat. She is one of these strange people who dine on plants only!! ( a slice of wafer thin ham perhaps?!) I love the Royale Family! Do click the video, it's only a minute long!

I might make a cheese quiche! ( panic ye not folks, I've loads of vegetarian recipes in my repertoire! )

I will leave you know with a possible new knit project. I was intrigued by the title. Biological Knitting. It takes me right back to my Biology lessons at The Grammar school! As my sister said, I can smell the formaldehyde now! 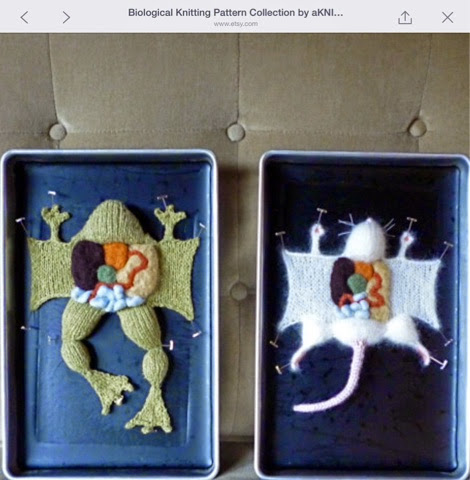 What's new with you? Do you eat Dairylea?!