The one where I admit to pilfering the family silver and I got away with it!

It's coming up to the season of insane TV advertising and I recently read and instantly fell in love with a new blog. The post in question discussed stereotypical toys for girls and boys. ( Read it and my "frankly hilarious" comments *here* ).

Memory wise, I seem to have the ability to dredge up lots of facts from t'black n white days when I were a lass, growing up in the 1970s. But telling you what happened last week can be a major struggle! Sometimes I do get muddled up somewhere between the two. However, I am pretty sure what follows is mostly accurate. It's hard to type, by the light of an energy saving lightbulb, with these rose tinted glasses on!

In the 1970's I remember an idyllic childhood. Mum and Dad didn't have any spare cash. Dad worked long, hard hours to barely meet the mortgage etc. Please put down that violin! I'm not after sympathy- it was just like that for us and millions of working class folks.

Mum has said that she didn't get milk tokens or help as she only had three children under five for a couple of months.( I spoiled all that by turning five when Baby Sister was just three months old.)  I'm not sure how Child Allowance worked back then either. I know she only worked part time when I was in the Juniors.  Even so, we never seemed to be visibly any wealthier! BUT I know she went without so we could have. I know she scrimped, saved, knitted and ran catalogues for the commission to be able to afford a fabulous Christmas morning for us. They were fabulous. Every single one.
It was magical. I don't recall ever writing a list.  We didn't pester. We knew there was no point.

Besides, our next door neighbour got EVERYTHING,  so we used to just go round and play loads!
The only time at Christmas I  recall being  desperate  for something, was for a ''Muppet Show Shopping bag, just like my mum's grown up canvas bag with a ZIP ( oh the technology ). I nearly died from excitement when I got one! There is a photo somewhere of me, in a long pink nightie clutching my precious. I think I used to take it to bed!!

Other beloved toys I remember getting include a Fisher Price school desk.It had a green chalk slanted board to write on and it was magnetic so all the letters stored in the drawers could be used to write words on the little picture cards! I was so jealous of my little sister when she got an actual real blackboard/easel!, But I loved that desk, It did me, till I got my own real life proper type writer. I also had a pegboard and pegs that I adored.

I had two Sindy Dolls- just like the ones in the photograph, one with black hair like me. I drew eyeshadow on her pretty face with biro. Think I got a smack for that!  With the next few birthdays and December 25ths I started accrueing accessories for my Sindy.
I had one of these.
I had ( please don't let me down google images ) ( It didn't !)  a travel case, like the one above. 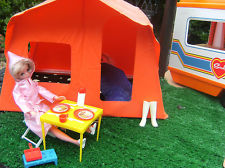 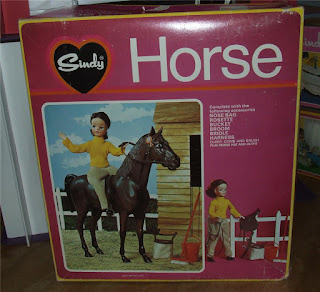 Now, there was a girl in my class, who's dad worked on the oil rigs. Therefore they were MILLIONAIRES. It's what we thought. We were all invited to her birthday party one year, her house was like a MANSION to me. Fitted kitchen, thick fluffy carpets, big leather sofa and a big COLOUR REMOTE CONTROLLED TV. Her room was MAHOOSIVE ( I was in a box room approx 2ft square ) ( That last bracket was a lie, but I was in the adequately sized box room ). In their bathroom they had a bath AND omg a SHOWER. Not a head connected to the taps shower, that dripped cold water onto you when you were in the bath, one  like ours. Oh no, a walk in CUBICLE one . To a girl who lived in a simply but comfortable furnished home with no frills this was like walking onto the set of Dallas! She was a Ewing whereas I was an Ingalls!! All the girls in my class went to traditional birthday parties at each other's houses.
Ya know girls, long dresses and side ponytails
Her party/disco was in the cellar, with the lights off,  with full on disco lights!!
I'm also pretty convinced that ( gasp ) boys were invited. That. Was. Unheard. Of to us 10 year olds. She was sooo cool! But for me,
It was her bedroom that held the main attraction.

She had The Full Sized 5ft Tall Sindy House.  Complete with roof top garden.The kitchen was to die for girls.  Stainless steel sink ( OK shiny silver plastic.) Complete with cooker that made cooking noises when you put the pans on the hob - bubbled and blipped like thick pea n ham soup does.
Bathroom- matching suite with, blew my mind, a cubicle WORKING shower.  ( Just like HER Mum and Dad's! ) Little teeny dark brown towels.
Sindy's bedroom was exquisite.
Simply elegant.
Solid white plastic, gilded with gold filigree bed,  with matching  darling blue cover and valence. Oh the poshness! The dressing table WITH mirror and stool - with cabinet table legs, again all beautifully carved. The lounge had a Chesterfieldesque leather suite all in top quality plastic. . . I WANTED IT ALL!!

Now I bet you all 10p, that it is this part of my tale,  where by you are linking the title in.
Well you are wrong!

I am getting to it, but most of you who are regular here know by know how I'll waffle round the houses to get to my point.

A while ago I wrote about Deathscalators and being in London.
On that school trip we were taken to Harrods. We all had £10 spending money I think it was - saved up throughout the school year - correct me if  I'm writing  , lovely old school chums, if you are reading.
There were these cute darling little 'Carrie' and 'Christopher' dolls. I distinctly remember Christopher because he had proper 'boy bits'!!
After researching, he did have the bits - as did she! 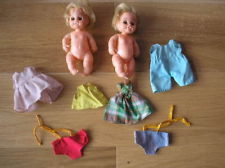 I think they were a fiver each. And then there were outfits for them. I'm pretty sure in remembering that ALL the girls in my class bought a Carrie/Christopher doll with an outfit. They came in a darling little terry towelling baby grow fastened with Velcro , she in pink, he in blue, natch. I bought a wee lemon sundress complete with matching knickers for my Carrie.


I'm pretty sure ALL the boys bought Slime. And one of those octopuses that walked down walls and windows.

So with the money that was left I think en masse us girls bought ;( cue remembering gasp of joy ) BABY WILLIAMS.
Look at all the Baby Williams photos I found! 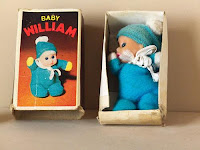 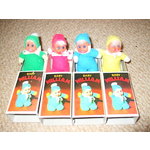 Hands up if you had a Baby William ??!! Strange but Oh so cute  little plastic headed babies with beany bodies sold in match boxes!!!
This created a kind of weird phase at school. We had those lift up lid desks, with a shelf at the top. On this shelf we ( and I know it wasn't just me ) created little apartments for our Carries, Christopher's and Baby Williams!

Again, if you are waiting for me to admit to stealing from Harrods.
You are quite wrong.

Think back to where I said we had no money back then. Entertainment was often going visiting and playing with our numerous cousins. Twelve Grandchildren on each side meant there were tons of us to go round!
I used to love to go to one house because there lived my glamorous older cousin. She had  proper blonde hair, cut in a jaunty style.  I loved her hand me downs ( though my favourite hand me downs always came from my Dad's side of the family - Maria was more bohemian whereas Diane was more M&S ) but I idolised her! Even though she was pretty mean to me sometimes!! ( Sherry trifle,  Diane, just in case you are reading! )
BUT

any meanness was completely forgiven if she 'let' me LOOK AT, not play with, but LOOK AT her Sindy stuff.
She had the Dining Room stuff. God it was gorgeous. The same handcrafted white plastic as the bedroom stuff. The carved high back chairs, the large table with carved legs, the table mats, the plates , the tiny, perfect beautiful silver cutlery. The silver cruet set. Le sigh. Be still my beating ten years old heart. 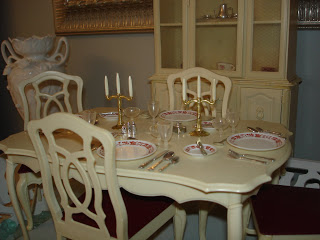 Diane and her friend Maxine had run away from me when we were playing hide and seek or something outside.

I went back to Auntie Pat's. All forlorn. For something to do I went to the toilet.

There, on the floor,  ON THE FLOOR  was the clearly unloved, unwanted, neglected spoon from Sindy's dining room.  Did I mention it was ON. THE. ACTUAL. FLOOR?  Not on the table in Sindy's dining room. Not put away carefully like I would have. Just carelessly abandoned.


It was just laying there, twinkling at me in all it's lovely silvery shininess.


Now MY Carrie needed a spoon in order to feed Baby William.

So I permanently borrowed it!!

It had a much happier life with me.  I never left it on the floor. I slept easy. No guilty conscience at all! She can't have missed it because there was nothing on Newsround about it!

So, Diane, I'd like to apologise! Firstly for you having to be saddled with a young brat following you round all the time! And for stealing the family silver! I hope you can forgive me!!

So... What toys were YOU desperate to have when you were small? What did YOUR friends have that you didn't. What family heirlooms did YOU steal?!!