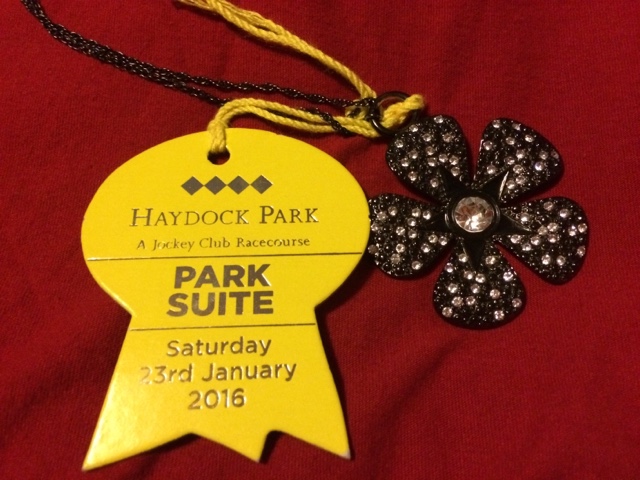 Here's my VAIR posh ticket from my VAIR posh day out, last Saturday, at the races! I had to tie it to my necklace as I didn't have any button holes or straps to attach it to! We had to wear it at all times, to make sure we didn't have to mix with great unwashed!!

The firm the HG works for sub contractually,laid on this day as a thank you to all the people who work for them. When he brought home the information months before Christmas, I'll admit I wasn't right fussed. If I'm honest, it could have been because I've never done it before. It could also have been due to the  fat phase I'm in so I don't feel great in myself. It could also have been down to the fact it was so close to the Tax Self Assessment date and the weekends are only my free time really to do them. ( Really I think, know the social avoidance diagnosis I developed with my depression, has never fully gone away )

But I had to be brave.

He said we'd go. Details were to follow. Christmas came and went. No details emerged. Probably due to the bosses' house being totally flooded and ruined, some of the business premises were under water too. To be honest I assumed it'd have been cancelled and was inwardly happy about this. Not the flooding! That was truly devastating. They are still not back in their house. Unimaginable really.

Then the message came, we'd be picked up at 10am and the dress code was now jacket and tie for men/smart for ladies and children as we'd been upgraded to the panoramic viewing suite, full table waiter service. This had me panicking a little. Now I had to wear strong magic knickers in order to wear my smart dress!

Right up to the night before I did a little bit of whinging and whining, secretly hoping the HG would say that we didn't have to go. However, he didn't.

So on Friday I did a little bit of research about Haydock. I looked up at what to expect. I did that old psychology trick of pretending I was looking forward to it. I had a long pampering bath. I laid out my clothes. Saturday would be here soon enough!

We got up, got ready - it was like getting dressed up and ready to go to a wedding! I liked my dress and cardigan combo. I had my new flat no hurty feet for me long black boots on and for once, my make up was less drag queenie than normal AND my hair was ok! We got a taxi to the meeting place, ended up going to the pub for coffee to wait as the coach was running an hour late. This was actually a good thing ish. The bonus was, I had rhe chance to chat to the HG's colleague and his wife who were being picked up with us. She was a lovely lady and there were no awkward moments! I admitted I was a racing virgin and she promised I'd be fine!

Why I was worrying I have no idea. They are all a friendly bunch - I've met them before - and they were all drinking prosecco!! The coach was a posh one and the journey took no time at all! Once we got there and picked up our race tickets we went to the Park Suite. 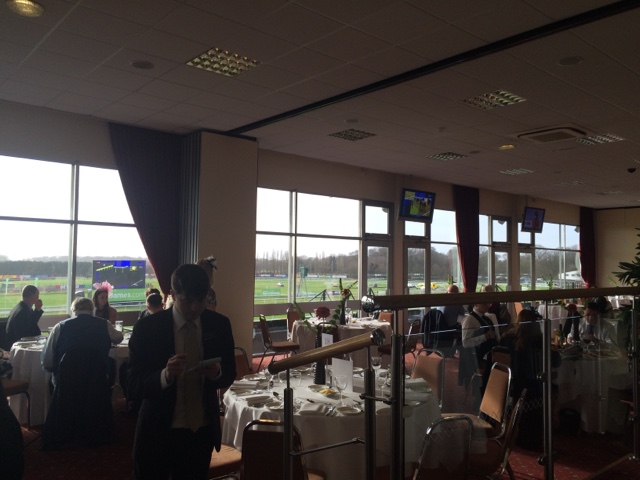 Posh people as far as the eye can see!!
We had great views of the race course. 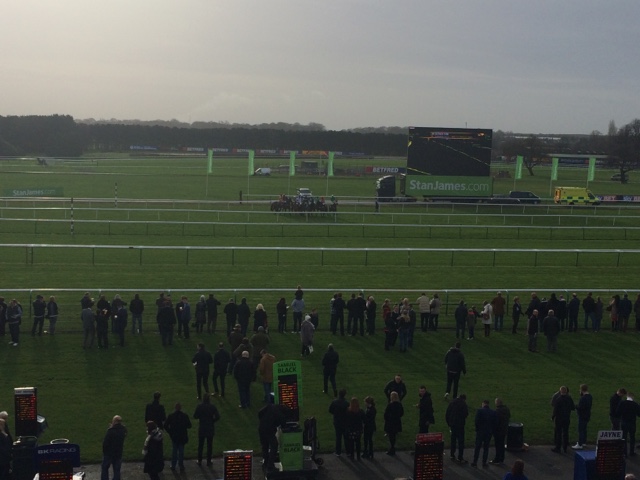 And, get this, our own exclusive balcony! 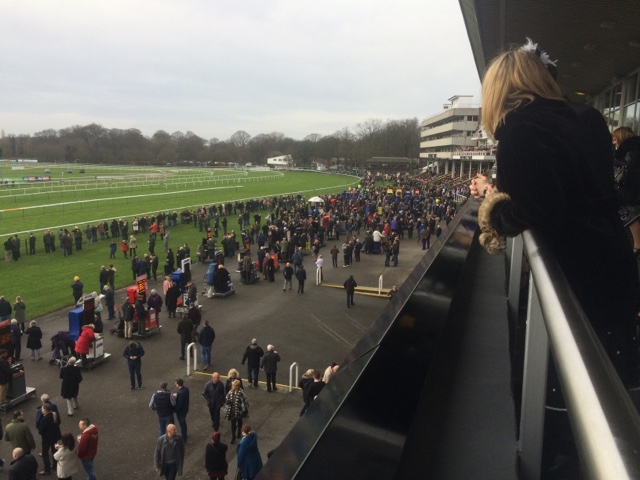 It was so exciting! We were shown to our table, the drinks were brought to us and the HG's workmate showed me how to fill in the tote betting slip - a bit like the lottery and we studied our free to us posh lot, £3 to the oiks, racing day programme! Don't worry, I was the proverbial oiky wolf dressed in the posh sheep's clothing!!! 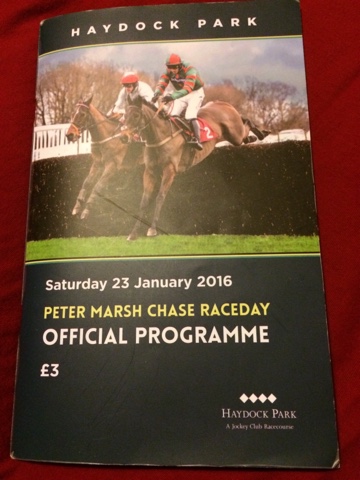 Because we were an hour late, I didn't get down to the trackside bookies to put a bet on 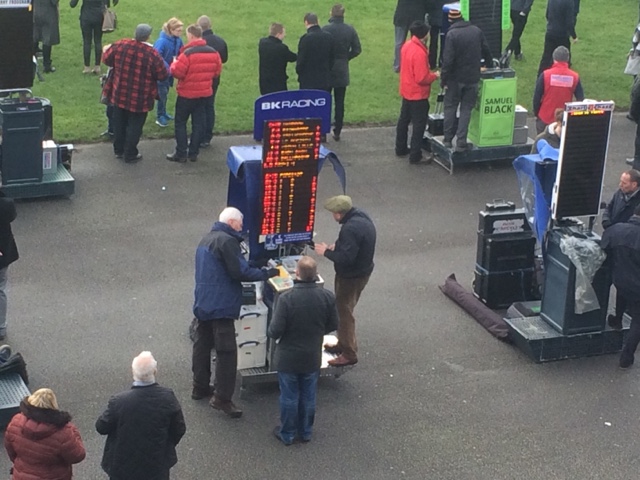 But it was ok, we had our own bookie in the corner. He was a sweet older gent who treated us newbies so kindly. Smiling as he took our money! Genuinely pleased when we went back for our winnings! And there was a lot of crossing the sumptuously thick carpet to collect winnings!

My good chum Barb from work's son had given me plenty of tips! I studied the form, bet on his tips and won!! Although 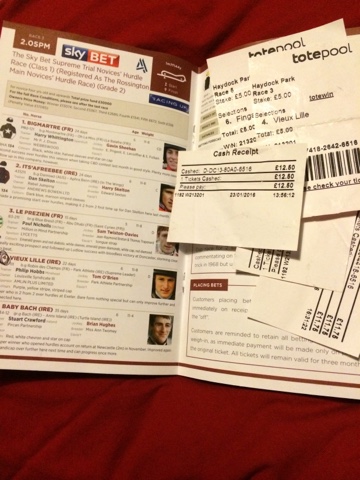 In this race the horse circled didn't win. The one called 'It's a freebee' did! Wish I had bet on it because we were all laughing on the table about how we were here one free day out!

I didn't take any photos of the meal, but it was delicious. We had parsnip and cardamom soup to start. Roast beef and Yorkshire puds for main and a giant slab of sticky toffee pudding and vanilla ice cream for pud!

There's a possibility we were on TV too as two of the men got texts saying they'd been spotted on TV! I forgot to tape it though and couldn't find it on catch up!

After we left Haydock, the coach dropped us off in town and we went for cocktails!

It was a brilliant day. I'm so glad I went. I'm hooked!! Can't wait to go again! Though I think I've been spoiled by the whole corporate experience! It's that or nothing!!