Cross Country Japes and a recipe!

Well Blogvillers, I've had a marvellous weekend!
I finished work on Thursday, finished packing and then my firstborn and I boarded the train to take us cross country from the North West Coast to the North East Coast. The reason for our mini city break was she had to hand back the keys to her Halls on Saturday 13th July OR ELSE!!
Now, all by herself, ( am I almost surplus to requirements? ) she's sorted out her house to rent next year with carefully chosen friends, which also happens to be within 5 minutes walk of her Halls best friends and the Flat 15 boys. Her house let begins September, the Hall's pairs started July 13th. Because they are very lovely girls they said my girl could store her kitchen stuff, bedding and books there till September, rather than drag it all back here and then back again!
The journey from Lancashire, up through Cumbria to Carlisle must be one of the most picturesque in the whole wide world. I tried to share this via the art of twitter, however lack of signal muted me somewhat!
The train from Carlisle to Newcastle is just as pretty but there are no less than 12 stops. It stops at every Farm shed, village and gate. If a sheep were to fart,  the train would stop! Anyway we arrived safely around 8.30pm.
Arrived at the flat and there were screams all around resonating off the walls at their first reunion for 6 weeks. I spied a huge hug off a Flat 15 boy who is in all her FB photos but who is 'NOT the boyfriend MUM!! '
The girl and her friends had planned to celebrate the non boyfriend's birthday so they got ready en masse and then went out!! Leaving poor old muggins here re cleaning the flat and packing stuff away! In fact I'd finished and was in bed before they even left! The youth of today!
Early next morning, one set of parents arrived and much hustle and bustle ensued until the next parents came. Between us all the girls were packed away and cleaned and tidied, sadly wiping away the traces of their year there.
We spent a lovely afternoon shopping in the 'Toon'. I can now say I've sat in every waiting area in every fitting room in every frock shop in Newcastle! We had tea out too - in a pub! So decadent! Back to the flat for last minute packing and to bed. Saturday morning arrived and all to soon we had to make the journey in reverse. This time with a massive suitcase, an overnight bag and the child's coffin sized Fencing bag. In fact, a bloke stopped us on our way to the station to ask if we had a body in there. "In this ( 30C) heat?" I retorted!
The stench would have been horrific - I was already dreading the great unwashed on the train!
We got on a blissfully empty train. Secured the body bag and the Mini Cooper sized suitcase and sat at a table. Two minutes before the train left a 'yoof' and his hound got on. A gurt big black sheep dogesque/collie/wolf type thing. It was panting its rank stenchy 'beef tripe for tea last night 'breath all over me. The 'yoof' chose to NOT WALK DOWN THE CARRIAGE  to where there were seats a plenty BUT TO SIT ACROSS THE AISLE.
Rex was told to sit down. Rex had NO interest whatsoever in sitting down. Actually Rex was interested in everything but sitting down. Rex had a look down the train as far as his lead would let him. Rex then turned his attention to us. We soon made the mistake of cooing over Rex who really was a cute beast! Rex licked my arm from wrist to pit in one big lollopy luck. He then climbed bit by bit onto my daughter's knee! He tried to lick her face. Rex clearly adored us. Trouble is, we are both allergic to Rex type coverings. Also as the weather has finally turned tropical, a real life fur coat wrapping was not a tempting scenario! The yoof eventually pulled Rex back to him and tried to settle him. I was trying now to to wretch at the slight tang of my new 'beef tripe for tea last night' perfume. We spent the next one hour and thirty minutes avoiding eye contact with Rex. The minute our eyes met he made a leap for us!  I was STARVING, but the consequences of opening a delicious chocolate and raspberry cereal bar were far to dodgy to risk!
They travelled all the way back to Carlisle with us! Eventually Rex lay down, just as we were pulling into the station. 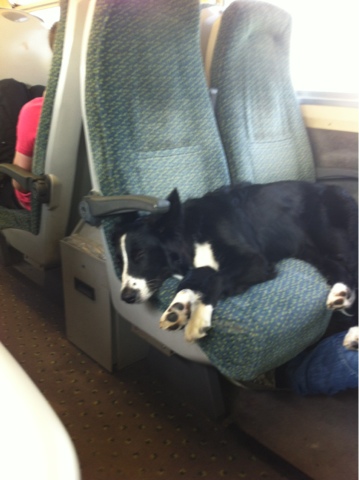 This is Rex, do not be fooled. He was only pretending to be asleep. He made a lunge for me just after I took this!! Isn't he gorgeous!!
Today I made a curry, using up all the manky veg languishing in the fridge. Normally I make manky veg soup but as I said, Summer finally arrived! So I set about making a vegetable curry. I have written a full on calorie counted recipe too!
My dish is named
'Rachel's Manky Veg Curry'
I will post it tmrw as I've waffled on enough and it's way past my bedtime.
The Year 6 treat tomorrow. We are taking them bowling. The Treat is definitely NOT for us staff! I will be glad to be home !
Posted by Rachel Flowers at 21:40