I've just noticed that this is my 294th post or thereabouts! I can't believe I've had that much to waffle on about. Yet here I am again!

I've had a very busy week at work. We had the Christmas Fair - I made snowflake topped fairy buns for the cake stall. I am very thrilled to announce they made it to the 50p section. 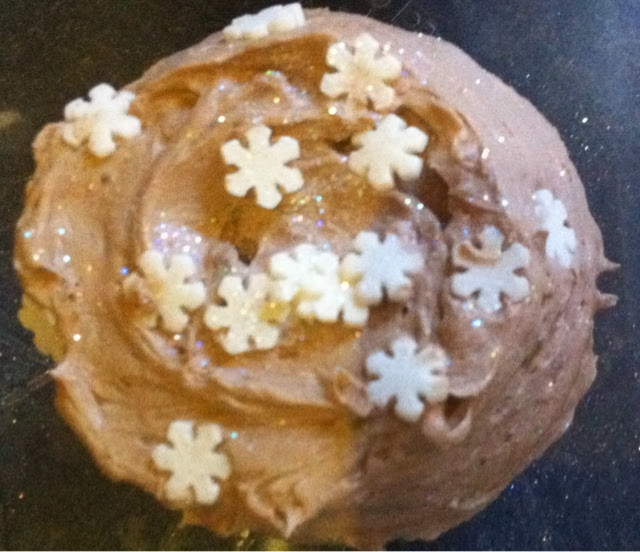 The WW2 topic is topped off today with an Educational Visit to the Imperial War Museum North with Year 6. I've been before. It is an amazing place - I find it at times, uncomfortably emotional, I must not break down into a blubbing wreck in front of the children!
( late night add in - it was a great day and I surprised myself with a climb of 161 steps to the top of a very very high tower but I got to see the top of the new Corrie set! ) 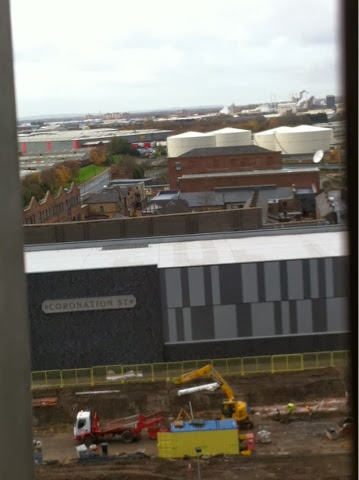 Then tomorrow, we are off to see the Uni one ( and Fenwick's Christmas Windows!) We are taking my Mum and Dad, who celebrated his 65th Birthday yesterday - Happy Retirement Dad! Except he's carrying on working! Cannot afford to pack in work. I wish for a lottery win this weekend, so he can.

Sunday will be a shopping/housework/pre Christmas Clean type of day. Then my tree will go up next week! Bargain Beef ( heavily reduced quality joints ) ( to be cooked on the BBQ at Christmas ) was secured at Sainsbury's last night after a successful Parent's Evening for the Teen. Well, it was eventually successful when we finally managed to see the teachers. They have the children make a timed appointment and are supposed to stick to slots five minutes long. Our first appointment was at 6:15pm, then 6:25 , 6:35 and 6:40. We arrived for maths at 6:10. And we waited.

And waited. At 6:17pm I started doing the 'shuffling from one foot to the other and glaring' angry waiting person dance.  I may have tweeted using bad swear words.  The parents who were hogging the teacher were, quite frankly, getting on my nerves.... The pushy parents eventually got up and we were poised to strike when some woman and her brat walked straight to the chair and sat down! Being British of course, I didn't want to make a fuss, so instead I just seethed silently.  At 6:25 we gave up and went to see the Business Teacher. She  had someone with her. After a few minutes, they left... We stood up....she called SOMEONE ELSE. I may have audibly growled. She apologised for running late and suggested we went to see other appointments. (!!!!!!) so now five minutes late for the IT teacher,, we tramped through the school to find a packed corridor of equally pissed off parents and their bratty offsprings waiting. We peered in the room but the IT man was occupied. So we left to go see Mr Chemistry. It was out last appointment booked. .he was waiting for us! We were warmly welcomed and thanked for being on time. He was already on the top of our favourite teacher list before he gave us a glowing report about our seemingly talented scientist son. ( how would we know? He only comes out of his lair to feed. Mostly at night. ) we left feeling smug! We then back tracked to Miss Business, who pissed me off because she spoke exclusively to the teen it was almost as if we were not there!  It was PARENT'S Evening for goodness sake. She did say it was nice to meet us. I did not believe her.
Mr IT had come out of his room now to look for us and took us in and shared some work, went through what went wrong,how to improve, how he expected the boy to exceed his ALPS target and then we went back to see Mr Maths.  He was with someone. They left. Another woman just queue jumped. I was almost at boiling point. I fact I was dangerously like that pan of milk frothing up the pan about to go over the top. I stood very close so I could tell you how her child was struggling with algebra.  Then it was us.
He looked at his list. Looked at the boy. Looked at his list and said we were late!!! He was told, bluntly, we'd been there at 6:10pm and ignored. He did back track and apologised several times and it turns out he likes to talk. Properly, to the teen and us about the work, the results, detailed feedback from class work, exam technique, extra clinics on offer and everything else you can think of! Mr Maths was thorough. He never stood a chance of being on time. I nodded politely as he took us through an exam question that had gone wrong. I didn't have a clue what he was talking about! I work in Y6 with the Red Group. We are still using tiddlywinks to share out for division questions! Anyway, the upshot was, we didn't get to go late night shopping as planned, but the boy is doing well and is broadly on track for success.
Have a great weekend whatever you are doing x just doing my Christmas Cards - if you want one - let me have your address!! Fun!
Posted by Rachel Flowers at 07:04