Last but one Friday off

Oh the outrage at the fact my six weeks holiday is actually only five weeks and three days! Every year it goes faster and faster.

Today I’m having my hair cut so am really looking forward to it . I love having my hair washed for me. Especially since the arthritic shoulders arrived! Then tomorrow we are away with friends just overnight, to see lovely old friends for a covid postponed catch up.

I’ve been playing a kind of fabric patchwork soduko/sudoko/sodoku ( all pronunciations covered!

My friend had a clear out of all her fabric bits n bobs and the other week I ironed and sorted and decided not to stash it away but to make something with it. So I decided on new outdoor cushions and a tablecloth for my outdoor table. Typical- the HG worked like mad to tidy up the garden by getting rid of the scrap metal he was collecting ( £515!!! So worth it - free money but I’m glad it’s gone and I’m not looking out on Steptoe’s yard ) and done the bay tree and power washed ( sorry drought stricken friends in the south ) and done a tip run and now weather has changed, the nights are drawing in and SPIDER SEASON has already began here!

Back to my patchwork, I wish I’d read Poppy Patchwork’s Hexi post and considered the different cottons and poly cotton qualities but too late. I’d have left out the yellow with red roses, the green and red printed with daisies gingham ( which I love ) and the red anchor fabric. Anyway - for the tablecloth I started with large squares but I really do like these smaller squares so I may just join four large squares together and chop them up!I tried to join a light to a dark, no spots, squares, plain or flowers together haha failed but it’s cheerful and I’m enjoying my little self.

I’ll see. This is laid out on the floor and I’ve been switching and switching! I had to walk away! 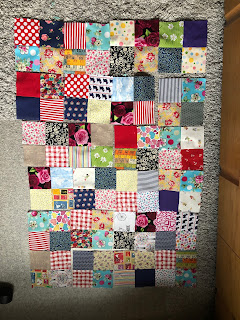 I am almost done with my other little sewing project too - pictures to follow! 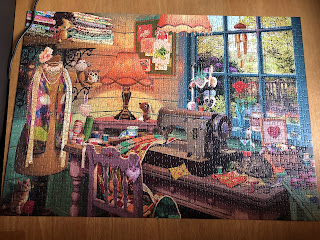 I’ve also done one jigsaw which was a birthday present. The lighting for the photo wasn’t brilliant. It doesn’t do it justice! Lovely rich vibrant colours. I’ll keep this one and do it again. 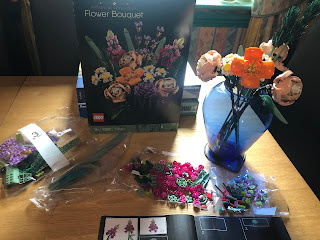 I’m also on with this Lego set my son bought me for Mother’s Day. I’m only doing one a day as I’m enjoying it so much, I’m ekeing it out! No smelly flower water to change just a dust with the feather duster now and again! I will take again with better lighting - it’s the dining room windows behind my table.

I’ve something on the needles. A little white baby cardigan for my future if any grandchildren stash. I’ve baked, walked the dog, almost finished Game of Thrones. I’ve read the first Cornish Cafe book - easy light frothy reading but so enjoyable! About to start the second.

Google found me this photo! 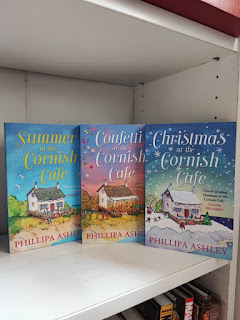 Me and my friend went to the poshest hotel everrrr for afternoon tea. We go in memory of her Mum in August and because we like a good old gossip over iddy biddy sandwiches and tiny cakes!

We are now employing ourselves as Secret Afternoon Tea -ers

So this was The Belsfield Hotel, Bowness on Windermere. If you have ever been to Bowness where you get on the ferries right at the bottom of the hill, and turn around and look up the banking, there’s the hotel! It was as hot as the surface of the sun but it was cool and quiet inside. Such a beautiful old building. Of all the visits we’ve had so far this one tops the charts for the venue. 10/10 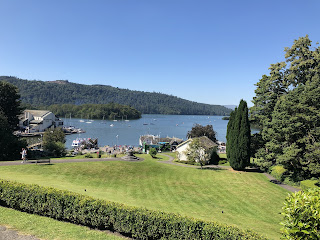 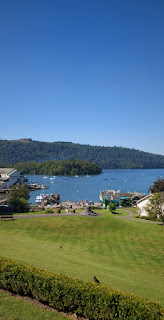 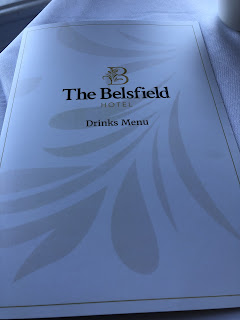 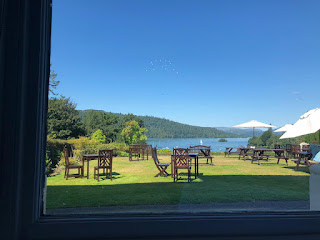 Staff - again very lovely  and attentive with the right amount of ‘madam’ and manners! One young chap should have had a dressing down off the Maitre D for his uniform. Desperately needed a wash and some needlework. 8.5/10 marks - loss of marks for unkempt waiter and a significant wait for the second pot of earl grey. We had to ask a second waitress to remind our waiter! It would have been a 7, but we awarded a 1.5 for them allowing us to put our boxes of uneaten delights in the fridge whilst we had a cold drink on the terrace! 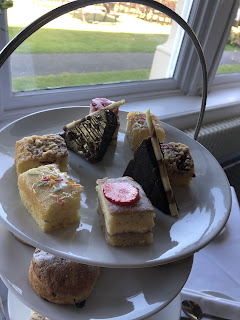 Ham - roasted on the bone and the mustard was good though my friend wasn’t a fan.

Cakes - the very lightest strawberries and cream square - the one we liked the most. It was gorgeous. There was a thick rich chocolate torte, a piece of good old fashioned vanilla school cake and then the scones. A fruit one and a plain with clotted crem and strawberry jam. Very light in texture and they were delicious but a tad on the crumbly side. Also a bit tight with the currants! The plain ones we took home! Stuffed. We also had a glass of fizz each - Prosecco for me and champers for her! 5/10 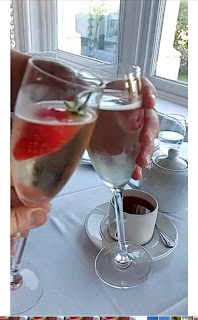 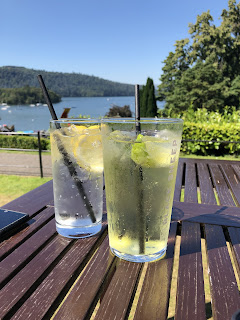 Have a guess how much this pint of lime and soda and half a pint of lemonade cost!

So that’s the lowest score for food but made up in ambience and opulent surroundings!!

I may start up a side page for these ! We are hoping to squeeze another in on the Tuesday or Wednesday before we go back to work!

Enough chit chat for now. Stuff to do, patchwork squares to wrangle!