Soon be half term.

It’s that time of year! It’s not been six weeks off! It’s been five weeks and three days off! We have two days of inset now and the childers are back Monday.

I’ve allowed myself to listen to the flipping news of doom and got quite stressed yesterday about the energy price hike that’s looming. I did a little maths yesterday and concluded that I think I need to get my meter checked! Last month I used 499 units of electric  and Google told me the average house uses half that! We used 11 units of gas. Both with Edf on standard variable 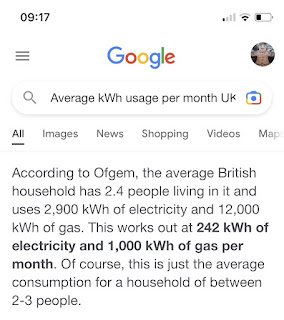 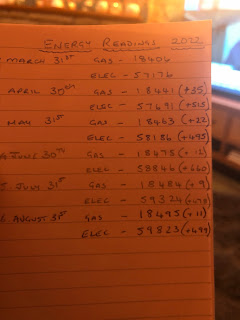 You need  a degree in something in order to understand the calculations on the bills! I’ve been carefully recording the meter readings since March. Something I’ve never really done to be honest. Oh quit with your audible gasps !

So there’s 3 adults here. 3 lots of devices on charge at some point in the day/over night. True it’s been the holidays and I have watched all of Game of Thrones but our TV is a new one so energy smarter than the old one but I’ve turned it off more of late rather than just leaving it on. My oven is electric. I’ve two fridge freezers. I’ve used my sewing machine a lot. I’ve electoral devices in the kitchen in daily use - the toaster! I’ve a washing machine and tumble drier. Both fairly new and energy efficient. I’ve used a lower spin this summer because clothes will drip dry etc. not as good when the drying window outside is shorter . I do have a heated clothes rail from Lakeland with a cover that is great and heats the room somewhat so will use that more. This month I’m going to not wash as much, spin less, shower shorter! To be honest this makes me sound like I’m over extravagant with my electric but I’m really not. We are at the moment in a big chunk of credit and are all working so 100 % better off than most. I really feel for those who live alone and no one  to share - there are people I work with who struggle already. There are food banks and food clubs already well used and over subscribed in my locality. I’ve access to emergency food boxes for those in need at work.  I strongly believe they will be more needed as the term goes on. I’m not so extravagant and wasteful as such, and there are many more out there more frugal than me and we could be a lot more frugal than we are now but I suspect that when one of us has had cancer and survived it, and the other had sepsis and survived it then it does lend itself to a more ‘f*ck it* attitude.

Things I know I am guilty of ( those of a frugal disposition look away now! )

Shopping - the weekly food shop is mostly done online. Not at the cheapest supermarket in person as I could do. If there’s anything new or on offer, I cannot resist! I am a marketing man’s DREAM! I know all of their tricks and wily ways to get folks to buy! I do.

I do buy treats - things that are none essential. Mainly for the HG and the dog.

Buying way too much stuff - the tins and dried  cupboard is rammed, I bulk buy things when they are on offer. Probably a good habit. I’ve done this a lot. Fear of not having enough? Hoarding? Yes.

I have of late ignored the salad drawer in the fridge and not eaten all that I buy.

I do have some good habits going on!

Well actually I always used to watch TV first thing with a coffee and the dog but now I’ve decided I’m not going to everyday. I can use my time better - in blogland for example haha. When I am at work, I do like to leave the TV on for Bluebell. I will endeavour to buy less and eat what we buy. I did do a stock take of the freezer in June and used lots of the things in there. Time to do another one. And I am enjoying free tomatoes grown from the seeds of a shop bought pommarino ( sp) tomato. 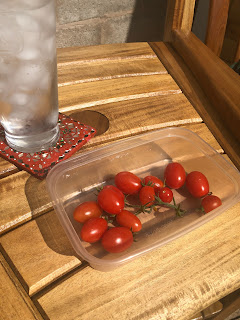 I have been much more mindful of late of the lights being left on and switching more things off at the wall but stuff like the TV and the various boxes that my son has linked into it need to be left attached to the electric because they’d all reset every time and it’d be a right ballache if I quickly needed something on screen.

I am changing our internet/tv subscription from Virgin to Sky making a huge saving ( I just hate the upheaval ).

TV watching is one of my loves! I love watching TV. I do. I’m not right interested in the reasons and whys  that some people have to not watch it or own one, their choice, that’s ok, it doesn’t affect me in the slightest bit oh my goodness the other way around? There are some right TV snobs about!!

I’ve loads of free ( at least for ten years ) ways to occupy myself too.

Walking the dog, knitting ( I’ve enough wool now in my stash to knit til kingdom come and beyond ) same re sewing and reading to name but a few.

Right I’m boring myself now and losing my train of thought! A pictures interlude …

I finished my Lego set of the bunch of flowers my son bought me. I’ve LOVED doing it and I really love the different colours and shapes of the flowers! I’ve yet to arrange them totally to satisfaction but here are some photos for you to get the jist. 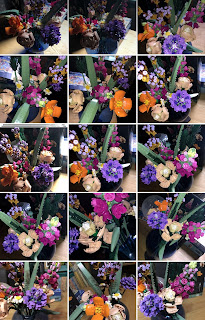 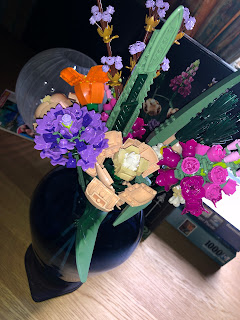 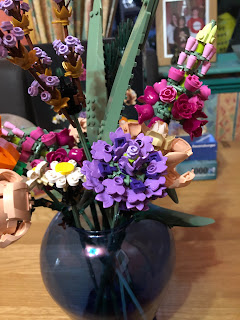 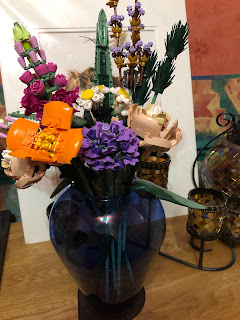 Also I finally sewed the coat pattern for my Luna Lapin. It was the one thing I saw at the knit and stitch show a few years ago that sparked my curiosity and admiration. I thought it was just exquisite and amazing and I never thought I’d be able to replicate it. Well I did and I’m dead chuffed! I made two! One from an Asda Tea towel and one from the beautiful boiled wool felt from Coolcrafting. 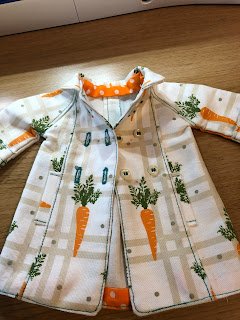 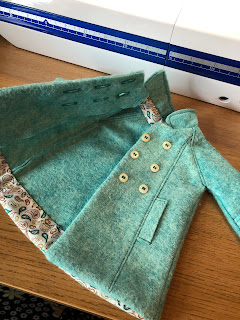 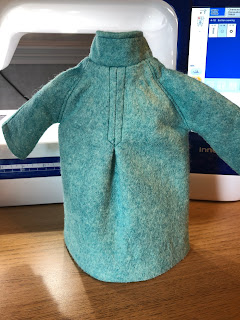 My mum was 70 last week so me and my two little sisters took her for Afternoon Tea and it was just lovely. We are not all together often so Mum really loved it. My nephew had made her a school cake that the staff let us surprise her with after we had eaten. I love the food at the hotel we went to. It was all absolutely delicious! 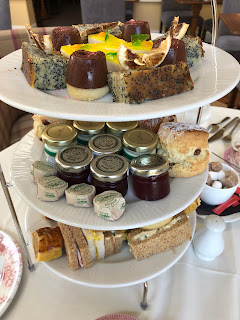 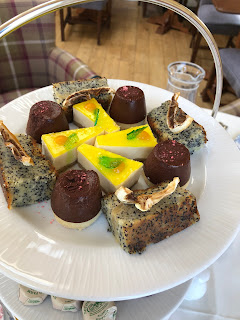 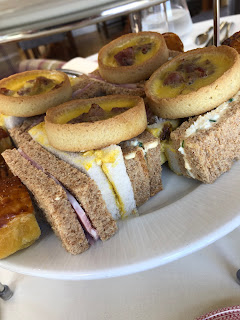 We then enjoyed lunch at a pub on Saturday ( I had scampi and chips no photo but it was delicious ) with Mum’s brothers and sisters, cousins and friends. I live that her best friend from school was there with her hubby. True romance story…. Mum’s friend was not a potter as locals say  but her beau was, they eloped to Gretna Green as soon as she was 16 to get married as they’d been forbidden to by his family! Over 50 years later - still happily married! THEN we went out for Sunday lunch at a different pub!

with my middle sister and her 4 children and me and mine as Miss 28 had come over from Newcastle with her Beau to celebrate! It was quite the shock to the system to have to cook for myself n Monday!
Right best get a wriggle on and get sorted to go to work. Gonna be honest, I’m not right arsed about going back and I cannot stand all the faux joy and jollillity on getting back together hearing about everyone’s amazing holidays! But I will smile and fake the love for those that I must!
Once back I will be fiiiine- it’s just the transition from full on laziness and pottering about and doing as I please and being with Bluebell all day that is the heartbreak for me! I’m fully aware also I do a good job, I’m good at my job and it pays for the nice things I like to spend ££££ on !
Lots of love from
Rachel *bra on, smile on* Radiostar xxx