When I first started this blog I used to blog about my favourite days when I was teaching the cherubs in Year One. I just checked before and there are a few from their time I taught them in Y3.  Well, they are now my class in Year Five! I know, doesn't time fly! ( also a lot of posts are bizarrely half missing! )

Well, yesterday, the lady who covers the PPA was poorly so I covered for her. I didn't mind. I sometimes miss my hectic days of HLTAing in all the classes teaching all the good subjects.

It was French. I taught this class in Y3. They were BRILLIANT at French. ALL of them! The subject we are now learning about is food. They know how to instruct someone in French to make a sandwich. They know how to order an ice cream. This lesson's learning objective was to be able to say which food they did and did not like.

We went through the vocabulary. We played games. We practised saying it. Then they had two pieces of work to do. One was a shopping trolley. It was the ' J'aime ' page. They were to draw the foods they liked and label it correctly. The 'Je n'aime pas' page was a waste paper bin. The work was for display.

They produced some fantastic work. But one superstar's work made me laugh. A lot! Now this little star had joined in with all the oral/visual work. We played 'Kim's game' with the food items we'd been learning; the missing item's were identified in perfect French pronunciation.  Perfectly. I had a look at the work. In the shopping trolley, beautifully drawn and presented were
Le cheese
Le chicken
Le chips!!!!!!!
I asked what do the French call cheese. The work was taken  and brought it back with La cheese!!!!
I love this star!! It was then correctly written as Le frumarge! (sic) Phonetic perfection!

But in the waste paper basket .....
This child does not like cabbage for one!! Le cabej. 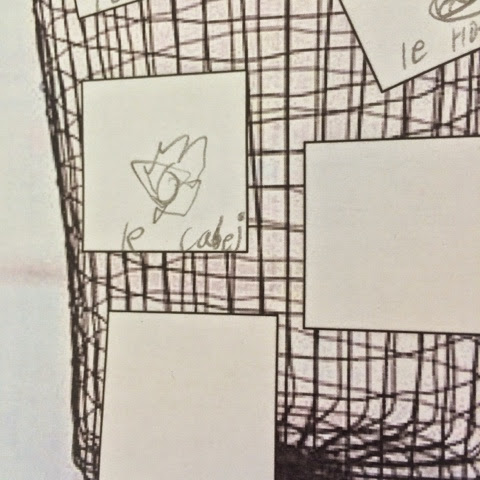 My job this year is a dream!

Now, I've been writing this post for so long, the above is week old news!  I can report that I was lighter than I was the week before and I'm lighter than I was last week. ILTIWLW is my new and current aide in my eternal quest to let my inner thinness out!

Frugal Food Recipe Alert.
Last Wednesday, it was all about the smell of beef slowly cooking.
The first dish was braising steak, simply done in the slow oven of my main oven with some sliced onions and stock. The second was oxtail.

The HG had spotted some big fat juicy oxtail reduced in the Bury Of Sains from just under £6 to £2.?? ( I can't quite recall ).
So out came my trusty slow cooker and here's what I did. And what you'll need if you want to try it.

2 big slices/chunky cut oxtail
Plain flour
Seasoning of your choice
Two onions chopped/sliced/quartered/diced - up to you
Large carrot as above
Celery as above
Stock I used one oxo and a knorr beef stockpot
Some people like to add ale. I'm not keen on ale done in my slow cooker - it's better in my oven, I do not know why.

I seasoned a plateful of plain flour with paprika, chervil, salt and pepper and a bit of steak seasoning.
I pressed the oxtail ( bone in ) all over in the flour and sealed in in a frying pan in some sizzling hot
Beef dripping. Drained it and put it on the carrots and celery in the slow cooker.
I then fried off the onions till brown and crispy ( caramelised for modern chef types) and added them.

Next, I poured over the stock and set it to low for the next 12 hours.

The result was a dark sumptuous smell throughout my house and a deeply dark delicious dish.

However, because I'd already braised the braising steak, we ate that for tea. The oxtail was destined for far better things.

The next bit, I learned from a TV chef. Dunno which one. But if you remove braised meat out of its cooking juice to go cool, if not eating straight away, it goes dry. Leave it in the liquid to go cold and it stays perfectly moist. I've found this to be true for years!
So the oxtail was left to go cold in the crockpot. I did try a bit first. It just fell off the bone and tasted nicer than the best braising steak we'd just had for tea! But in the fridge it went.

The next day, I was faced with a solid stock. Jewelled jelly surrounded the meat. But in I went! I discarded the chunks of carrot and celery. They'd done their job. I could also discard all the fat as it was set hard white. To be fair, there wasn't much, but the fact I could remove it all was a bonus in the battle of the bulge. The meat fell off the bones and I ended up with a surprising amount of meat, shredded for a meat and potato pie! The oniony stock was saved too. A little bit was mixed in with the meat and some crushed boiled potatoes were added.

Shop bought ( gasp) shortcrust pastry was used. The pie was served with chips and peas and the delicious gravy. Best. Pie. Ever. Obviously I had IWBLTLW portions! 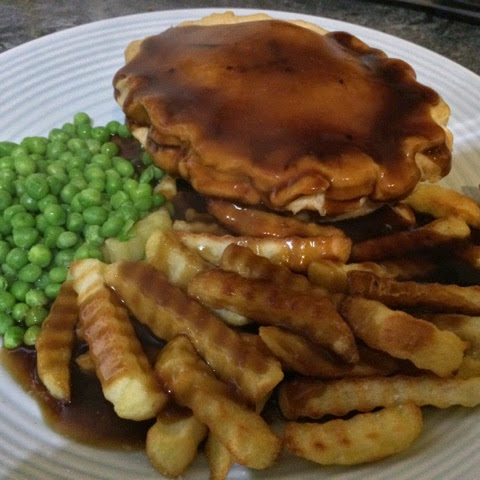 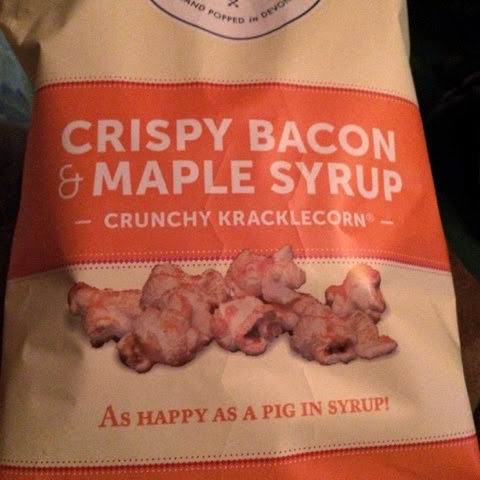 The only other thing I wanted to share with you was this popcorn. I say, I wanted , alas I can't. Because it's all gone. It was soooo lip smackingly moreish!

What have you been eating lately?