Happyish, because I am ill. Well not ill ill. Just not right.
On Thursday 6th FEBRUARY whilst at work I became aware of my scalp. Just on the right hand side top quarter. It felt like I'd had my hair up in a tight ponytail all day. It was tender to the touch. It felt like I'd banged my head and there was a bruise. Only I'd not banged it. It was very odd. The next day it was still there, only I'd get the odd surging, searing pain that made me wince. I took painkillers. Whilst they dulled it, it was still there.
By the time we'd broken up from school on Friday 13th, I'd listened to my work chums, telling me to go to the docs if no better.
Of course I'd already been on the t'internet and self diagnosed! I had some alarming diseases for sure!
Anyway, on the Saturday, the HG and I got the train to Manchester as I'd got tickets to see Phoenix Nights Live at the Arena. I whinged a little bit about a sore throat. Took painkillers and ceased whining. My scalp was still sore. No better, no worse.

We checked in early - The hotel was just fabulous! We's only gone to dump our bags as check in was officially 2pm. But at 11.30, we were given the key to our room! So we settled in, had a brew then trotted into Manchester for some Manchestering around!
I bought some little stud earrings and the HG got some new jeans. We headed back to the hotel to get ready for Peter Kay's Comic Relief extravaganza. 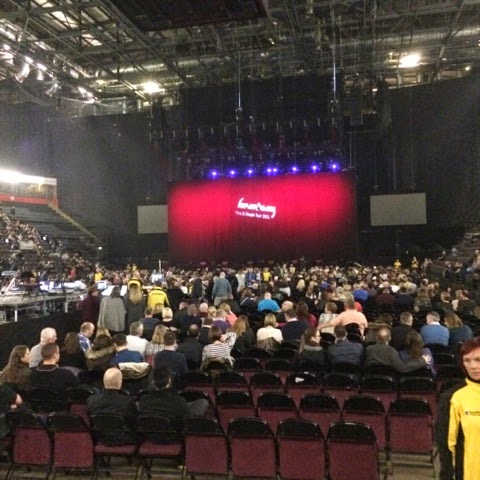 We were not disappointed. It was brilliant. I think you have to have watched the TV series to get the most from it. I have got the Black Bin Bags song in my head!!

We enjoyed a pint of Dark Fruits strongbow cider. It was delicious. So it should be! £5.40 a pint. Bloody daylight robbery! We sipped it n made it last!!! 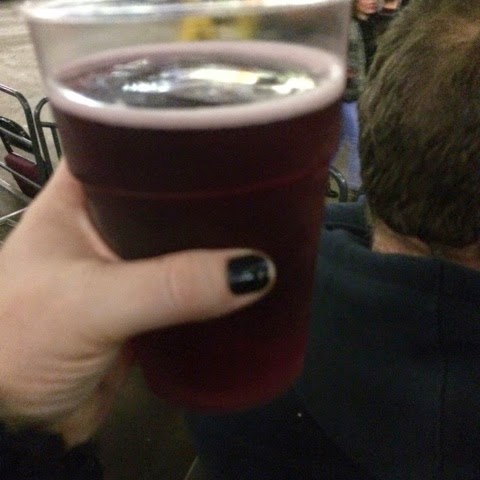 The hotel is just over the road from the Arena so after a five minute walk, we were safely back!
That's when I noticed I had a lump on my upper eye lid. It was definitely not there beforehand. I'd put make up on so I would have noticed it. It wasn't itchy at all and I couldn't see a bite mark. We just didn't know what it was. The next morning ( Sunday ) it was bigger. My scalp still hurt. I'll tell you about the breakfast after I've finished telling you about my illness.
The return journey was looooong.
We left Manchester on the 'Northern' service to Bolton, ( This made me giggle! Seriously, that's what the announcer/tannoy man called it.) at 11.23am
Then it was a bus replacement service the rest of the way. Bolton is approximately one hours drive away from my house. We went to places I'd never even heard of! I saw some really fancy what I call 'Lottery Win' houses. TEN PAST FRIGGING FOUR was when we got to our house. Epic journey. My head hurt. I whinged a lot! The rugby was watched. WALES won but I have to say Scotland do look much improved than last year. Didn't have much tea, still full from Breakfast! Off to bed.
It didn't take long to fall asleep, but I was woken at 4.14am by a hurty ear. On the same side. Not my ear as such, but now there was a lump front and back of my ear . Very strange. So I decided to heed the cries of all my loved ones and go and see the doc. Surprisingly I got an appointment for 10.15 off Luke, the new receptionist. I say new, I have not set foot in the doctors since I was yellow and that's three and a half years ago now!
I predicted
He'd say .... It's a virus                         I'd say .... I guessed that.
He'd say ..... You are too fat                 I'd say ..... I know
He'd say........ You are due a smear       I'd say ......I know.

Actually he was lovely. I explained about the scalp ponytailesque pain. I showed him the lump. I showed him the photo of the lump on Saturday. He poked and prodded all over my head. He introduced scopes, made me say 'ahhhhh' with those horrible wooden lolly sticks. He shone a bright light into my eye. He was looking puzzled. He said he was thinking three things.
1. It's a virus ( HA! Ten points to me ) as even though my throat wasn't sore, there were spots on it at the back - although worryingly he mentioned tonsillitis. I've not had tonsilitis since my eighth birthday. This is due to the fact that on my actual eighth birthday I had my tonsils and adenoids out.
I wasn't aware - despite my years of high quality medical training - that tonsils can grow back.
2. It could be shingles but the usual tell tale rash wasn't visible, but it could be on the inside.
3. Temple arteritis - the one I'd come across when checking with Dr Google.

He said my symptoms didn't all quite match up. He asked me if I minded if he went to ask his colleagues.
He came back and said that I'd got four doctors puzzled.
He examined me again. He asked if I wanted some Naproxen for the pain. I declined because Naproxen made me feel worse when I was yellow. He asked if I wanted codeine. I declined because they give me weird weird dreams. Also, I wasn't in pain, pain. I was just aware of my skin the whole time and when pressed, the lumps hurt.
Anyway, upshot is, I've been given some tablets to try, for nerve pain for two weeks and I've to go back if I'm no better.
Fast Forward to now. Wednesday morning. My eye is now red, the swelling is larger but flatter and is really sore to touch. My forehead is a little itchy too, over the eye. I've a little pea sized lump in front of my ear and the gland is still up behind that ear. The tablets knock me out and render me useless til Lunchtime! It's a good job it's half term!

Right, breakfast. I'd read the reviews on Trip Advisor and was a little worried...
My Facebook status was -

The breakfast? Well, yes I did feel like a borrower as the tables were super high!!! But luckily I own a 6ft HG
Just the neat layout and the vast vast VAST array of all the different foods was outstanding!
Bread for toast was on one whole table. Sliced white n wholemeal. Then real uncut farmhouse loaves, rye bread, granary cobs. Continental rolls, pancakes, waffles and the obligatory croissants and pain au chocolate

Then there was a cereal bar with four types of milk.
Costa latte/cappuccino or filter coffee  from the waitress or tea  and coffee to make yourself.
Four different fruit juices with, get this, tall glasses. Bottles of chilled still/sparkling water
The hot table
Super posh heated stainless steel lidded bins With little gas lights underneath.
Bacon, sausage, scrambled egg, beans, boiled egg, fried and poached to order, tomatoes which were beautiful, black pudding, Mushrooms, hash browns, Bottles of real hp n ketchup .
Then if you had any room you could have made a start on the muffins. Fruit. Cheese.
Jams, Nutella, marmite.
Think that's about it!!!
Oh  sorry, forgot about the yogurt!

Next time we go to Manchester, we have no hesitation about staying there again! The food was delicious and the staff were just so lovely and made sure we felt welcomed and relaxed!

So, that was a long old chinwag wasn't it?! I'm going to sort out my wool stash today and locate my missing crochet hooks. I've looked everywhere. They are not where I thought they would be. I'm going to have another go at teaching myself.