The stretch comes from the weekend whereby I extended my lovely weekend luxury by a day! Friday was HALF TERM day and I wasn’t working the after school club because I was going on my first ever hen weekend. I’ve been on a few Hen nights back when I was younger and before I had the children and don’t really understand the need for whole holidays!

My friend and I discussed this and decided on our personal perfect pre wedding girly thing! Afternoon tea- just me and her hahahah see further on!

Anyhooooo, the bride to be  is so lovely and due to covid had to postpone her wedding. The Hen party have been in secret talks for two years now!! Originally it was a planned posh weekend in York, in the Summer. Large guest house with hot tub, river cruise, pamper afternoon, cocktails, posh meal etc

So we all paid in a deposit and then sent a little bit more when asked, like a hen do savings club! Sadly that was all cancelled but we didn’t worry. Her lovely bridesmaids then sorted out something else that was postponed and finally the weekend in the Lakes was planned.

We stayed in Grizedale Lodge 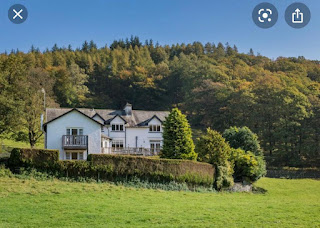 which was in the middle of nowhere. A lovely chocolate box house with loads of spooky rooms and corridors! It was cold, daughter and creaky! It did NOT look like the photo weather wise because it was absolutely chucking it down all weekend. I wasn’t surprised, it’s always wet in the North West!  It did don’t spoil a thing either! When we all arrived Friday there was a huge platter of food ready and the most amount of bottles of Prosecco I’ve ever seen! 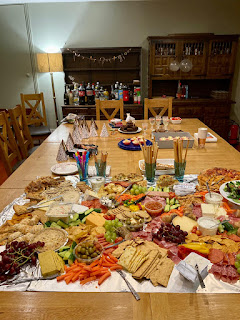 Do you know what they did which I thought GENIUS and I’ve never ever thought of it before? Instead of plates and bowls that would need clearing away and washed up, they simply lined the table with foil. Then they just laid all the lovely food out so attractively. There were 17 of us altogether and it did look like a plague of locusts had been afterwards! But the genius thing was, after we checked for cutlery and removed the one bowl that held the salad, we just had to wrap it all up and throw it away! Easy cleaning!! -There was no recycling bins to be seen else we would have used a food bin etc but for ease - genius!
The kitchen door was just to the side of the huge dresser and well.
I followed my friend INTO the kitchen, she PUSHED the door ahead of me. There was a bolt on the inside.a few more girls came into the kitchen.
Then leaving the kitchen, I had to reach up and use the bolt to PULL the door open towards me so I could leave.
I admit I was thinking, stupid old house, no door handle on, ridiculous.
Imagine how daft I felt when my friend and I were exiting the kitchen later and she just PUSHED it open from the kitchen side!!! Readers, it was a SWING door! I hadn’t even been drinking. We laughed and laughed and laughed!! Honestly I should get out more! More laughs came from the Mr & Mrs type game ( the couple are childhood sweethearts ), the make a wedding dress out of toilet roll game, the table ping pong and just the general chatter. There was a good mix of girls. The bride and her maids are late 20s to 30s, me and my two friends were from when she trained to be a teacher at our school - that makes 3 student teachers out of the 100s I’ve seen at work that I’ve kept a proper friendship going with. There were some friends from her next school and current school. Her Mum, mum in law to be, aunties and cousins. Everyone just got along.
My friend and I shared this lovely room! 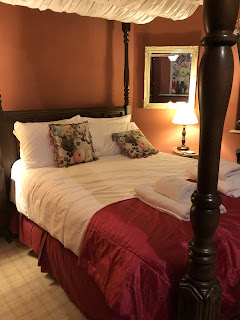 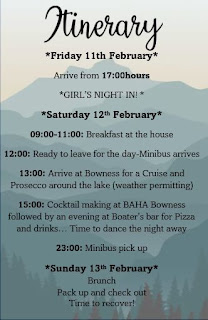 but unfortunately the boat was cancelled due to the weather. So we asked the minibus to come an hour later and we all had a lovely leisurely  morning, got ready, took loads of photos and set off into Bowness. The ride was windy, and full of deep flooded road puddles! I was glad to get off into some fresh air! Myself and two friends spent the free hour we had before cocktails, charity shop and art gallery browsing and then went for a bowl of chips and a cup of tea in Bryson’s tea rooms above their bakery.
Then it was cocktail making. It was brilliant. The two young instructors were funny, friendly and helpful. We made a pornstar martini each, two hens at a time behind the bar. 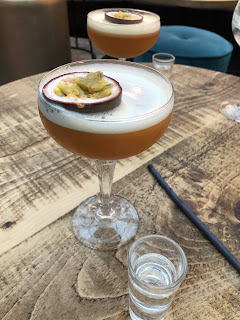 They gave us a shot of Prosecco to sip to cleanse the palate before drinking the sweet, creamy cocktail. It was lovely. The other cocktail we made was sunset on the shore or something! It turned out orange and blue. I enjoyed that too! I do like a cocktail.
Then the bride made us all a little teeny mini Guinnesses which was a coffee flavoured liqueur with some Baileys on top. We then had photos and as we were leaving to our next destination, a stag party came in and the groom was wearing a beautiful bridal gown and his big burly bridesmaids were a dream in peach satin! They were from Newcastle and very funny!
We then went to the Lakeside bar Boaters for pizza. I had a vegetarian pizza that was delicious then my friend’s hubby came and collected us and took us back to the house whilst the others carried on dancing. Normally I would have stayed out to see the live band but since Covid I get very very fatigued and I’d had enough. We got back to the house, rolled our eyes at the mess the young ones had left, got into our pjs, did a quick ten minute tidy round, lit the fire and had a good catch up with a cup of tea and a face mask!
The rest of the hens came back by 11.30 and everyone was in bed at a respectable hour!
The next morning I made poached eggs for my friends and we sat at the table and felt like we were still on holiday. ( Apologies
To those who have seen these photos on my other blog ) 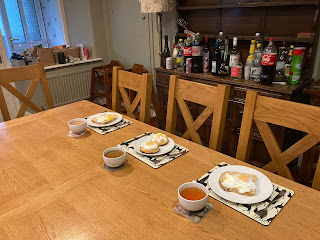 One by one the party left and with trepidation due to the horrendous weather, so did we. Fortunately the roads were not too treacherous and there were
Only two omg how deep
Is that puddle in the road moments.
I got home. Was fussed to distraction by Bluebell and I gave her the charity shop teddy I’d got 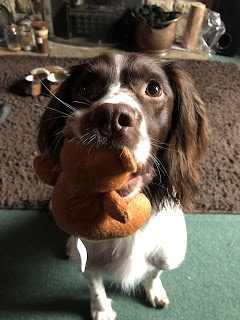 and then the HG and I nipped to Sainsrobbers for spuds and a few bits and then to see his Mum. I helped her have a shower and washed and dried her hair. He hoovered through  and tidied up then me and his mum stripped and changed her bed. Once home I put a chicken into roast and we had it with mash ( though I just had boiled ) carrots and cavelo nero cabbage. The gravy was just the best I’d made in a long time.
I went to bed early and woke up on Monday glorious in the fact I did not have to go to work!
I had a super lazy morning and caught up with the 6 Nations rugby, masked singer - I fast forward through  most of it but I do love to hear the singers - and Dancing on ice - again, fast forward a lot. Torville and Dean are amazing if you think about it - mid 60s and still can do a routine! No spoilers but I did feel sorry for the ones that went as I felt the none pro skater had shown real improvement! Laughing at me as an armchair expert!
Then I went and got posher  up again then my friend came and picked me up. Back to the Lakes I went!
I went to a gorgeous 4 star hotel called Lindeth Howe. We were going for afternoon tea. The best one we have had yet. We always say that. We have decided we are going to sample the Lake’s Afternoon Teas like others do Wainwrights’s walks hahahaha get a tick list going.
We HAD planned to return to the last place we went to, but my friend is a florist and had just booked a Wedding at Lindeth Howe and wanted to go scope it out. Gorgeous quirky place. I wouldn’t say the toilets were 4star though. Very disappointing compared to the rest of it! 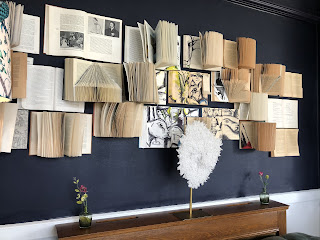 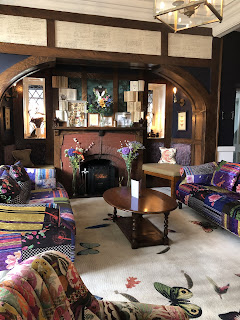 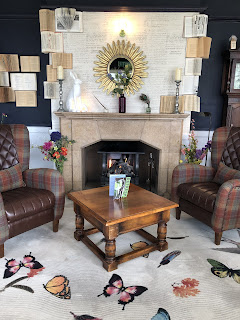 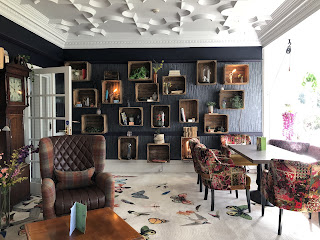 The Afternoon Tea itself was DELICIOUS and my favourite thing was the buttery Viennese whirl, closely followed by the pistachio batternburg. We washed it down with gallons of Earl grey tea. I particularly like the fact that we were not rushed out and we had a good three hours of nattering and nibbling! 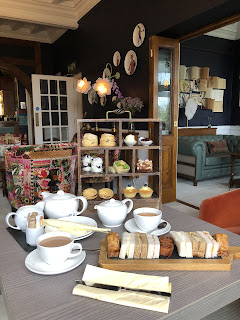 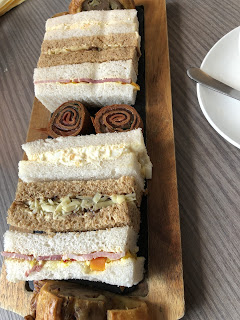 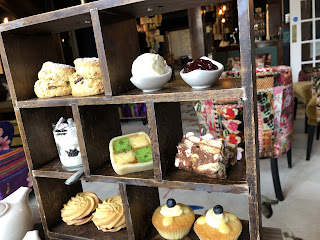 I got home. I made the HG real chips in the deep fat fryer to go with the left over chicken and gravy for tea. Well it was Valentine’s  Day haha we don’t bother with that - but he did buy me a present of some Lakeland Plastics sponges! I’ve needed some new ones for ages!

I went to bed early and woke up early today!

I got up, made his packed lunch and sat with Bluebell a while. It was raining first thing and apparently it’s the best day today before two storms hit us Thursday Friday. I’ve hoovertooled all of the upstairs and down the stairs and the hallway. The washer is sorted and I’m soaking a ham ready to make a Pinch of Nom Campfire stew overnight in the slow cooker. I’m just watching The GB women at curling before I go get the hoover and do down here. Then I’m going to take Bluebell to the park and will no doubt need to shower her when we get back.

The sun is shining so I must crack on!