Oh little Eddie, you made our day out. I have regaled your epic adventure to most of my real life friends with much hilarity. We will never forget you, or your owners.

It was a boiling hot, blue sky day. We'd been looking round Portchester Castle and had settled on a bench in the grounds, within the Roman Walls for our picnic. The huge vast greens were full of families with children picnicking and playing. Here is a photo of mine taken, rather bravely by me, from the top of the very very very high tower at the castle. This was early on in the morning. You can see the church and the big green space, empty for now, being mid morning...but packed by lunchtime... and the bench next to the tree that I was sat on when my story happened... 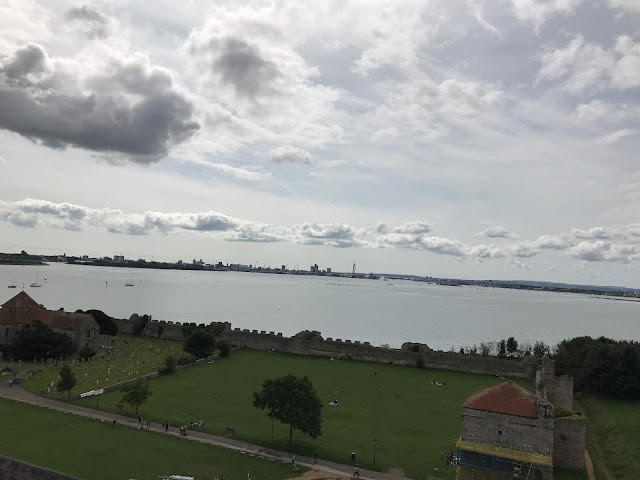 The HG and I settled ourselves on a bench facing the main path, which was the main route from the sea too. We ate our lunches and people watched.
We spotted Eddie's humans an older gent and a younger lithe chap. Eddie was trotting alongside and and we looked fondly on as he was a splendid border terrier. The HG had a Lakeland/Border cross years ago who was beautiful. So we admired the pooch as they almost reached our bench.
Actually we had no idea at this point as to what Eddie was called. We learned his name when suddenly the dog darted like a minnow across the path onto the large green behind.
Eddie,     Eddie,    EDDIE,

EDDIIEEEEEEEEEEEEE
was the cry from the hapless owners. Eddie clearly hadn't thought they were shouting to him because he completely and utterly ignored them and sped on with murder on his mind.

On the large green behind us, several families were picnicking and playing. There was a huge group of mums n kids at the very back of the green.

Suddenly there was a huge wail, simultaneous with the shout of

EDDIE NO, NO, EDDIE.

So of course, all of us spectators got whiplash to turn and see just what the flippity heck was going on.

Well, Eddie had captured a football and was viciously shaking it to death all the while running at a zillion miles an hour around the arena!! He was killing it good and proper! The mums collectively stood, hands on hips. The owner of the ball, an 8ish year old boy wailed forlornly and Eddie's owners scrambled down the slight incline to the green, all the while shouting at him to
drop it,
leave it and
come here.

The chase that ensued was of the cartoon Roadrunner proportions. Eddie, dropped down to lie on the floor, panting, prize ball betwixt his little furry front paws. He let his  owners get just *soooo* close to him before snatching up His Ball Now and  scampering away.

His owners tried a pincer movement. Eddie saw them coming. He danced around that field. He scooted the now popped ball with his nose, he then recaptured it and rekilled it over and over. Another tactic of the owners was to get close to Eddie, call his name and show him a tennis ball with a 'what's this?' Eddie merely glanced, Eddie then laughed his head off with the rest of us as the older owner threw a tennis ball at him. He looked disdainfully at said sad little tennis ball as it landed close by and made off with his prize to another part of the field. The younger, lithe owner took off his jacket, flung it to the ground and set off like Linford Christie after Eddie, Eddie pelted away, the owner was gaining, Eddie paused, and I kid yet not, the owner leapt off his feet as if to swan dive on top of Eddie. Eddie waited until the last split second to dart away and let his owner belly flop on to the grass arms outstretched!!

Eddie got a smattering of applause from the spectators. All except one. Angry Mama, still hands on hips approached the older owner who was on his hands and knees beseeching Eddie to come here. Eddie had the ball in his mouth and was in the playful pose of bum up in the air, tail wagging, down on his front legs, wide open mouth grinning at his owner. 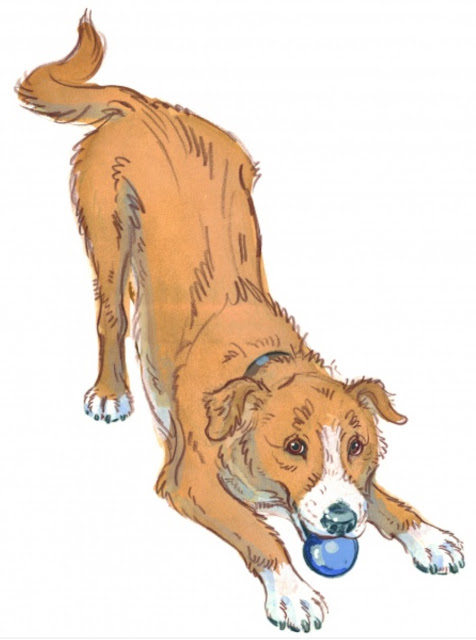 The owner was now throwing treats at Eddie from his man bag. The mama came up to him and you could see he exchange. The older man gave the mama some money. The mama went away.

The next tactic was for the owners to nonchalantly walk off the green, saying, 'Come on then Eddie'. Eddie didn't care! He was having the best walkies ever! He scampered around, playing with his new toy, totally oblivious of the fact that his owners were standing off the green near us. I said that I thought Eddie needed more recall training. The older owner said the angry mama said she was glad it wasn't her dog and that the ball had been a limited edition. I'd said I hoped it wasn't an England
signed ball!! So Eddie was thrilling his adoring fans by throwing his popped ball up in the air and catching it and running around some more. His owners needed oxygen by the looks of it.

Their next cunning plan was for them to go hide behind the church wall so Eddie would worry where they'd gone. Let me tell you folks, Eddie couldn't give a toss where they'd gone!! The older man was crouched down and the younger man was trying to double back around Eddie and trying to capture him from behind. Eddie, of course, had this sussed from the get go and simply trotted ever so slightly just out of reach. Eddie's older owner now took to the area again. This time, he threw treats at Eddie. Eddie wasn't arsed about tasty morsels at all! He took to his heels, all four of them and scarpered in the opposite direction.
This had been going on for ages. Indeed, I'd finished my giant Slimming World friendly lunch and
was on my own tasty morsel of an apple. Finally a group of young chaps, who'd also been enjoying the show, took pity on Eddie's poor owners. They had a shiny new football that they began to kick about tantalisingly close to Eddie. Eddie could not resist. He let go of his popped toy and darted to attack and kill the new ball but the youths were too fast and Eddie was thwarted. Eddie ran back to his first kill.....where the younger owner was waiting, collar was grabbed and Eddie was nabbed!
Eddie was carried off the field to a giant round of applause! He was put on the lead and his owners had to do a walk of shame back along the very long path in front of a lot of tourists! I wish I'd videoed it. It would have gone viral I'm sure. Especially the failed swan dive! We will never forget you Eddie x