Well, every year at this time, on the blog somewhere will be something from me talking about how sould destroying it is having to sit and read Maths questions to children who should not even be doing these stupid tests let along Janet and Roger Middle of the roadsters.

Anyway they are also good for a chuckle. No childers were harmed in this story and my little charge was very happy with how they'd done on the day.  I'm having to paraphrase so you get the jist as I can't recall the exact words.  There was a picture of kittens...something like this. 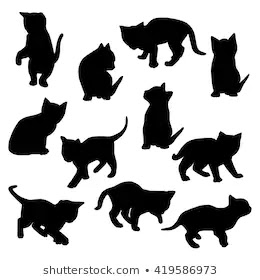 There was a statement that said.
Here are a group of kittens, all with different masses
recorded here.
(Under each sillouhette was a weight eg 250g 375g etc in a random order.)

My cherub whispered to me, " I don't know what masses are, I don't know what it means."
I say, I can't tell you what it means, shall I read it again to you? An eager nod. The reality is I could read it forwards, backwards, in Spanish and in Latin and it would not have made it click. If I have cheated and said, it means how heavy they are, look, can you see the weights underneath? They are the masses. The poor sould would still not have understood. Anyway we went on. I re read the question stressing the words 'difference, largest and smallest - this is totally allowed under the readers for sats guidelines.

ahhhh said my charge. And correctly circled the kitten showing the smallest mass. In my head I'm thinking, bloody hell, they might just get this one. ) then circled another kitten with a bigger mass but not the largest mass ( which was 410g by the way )
So then we spend some time looking at what we have circled. I read the question again. The child looks at me and whispers - pointing at the first one they circled -

Easy, this one has a shorter tail.

Bless!!! I then whispered back, I don't think there is enough room in the box to write all that, it's Maths, maybe they need a number.

"Oh ok," they say nonchalently, and just write the number 10 in the box without a moment's thought!

Anyway, its been a full on busy day. I've walked 2 miles to training, had the weekly dose of humiliation of how crap are you with your dog, then 2 miles home. Madam was too tired to eat her tea. I wasn't! It was a pork loin chop, chips and peas kinda tea here today. I'm on a course tomorrow all about the effects of ACEs on children's brains. It really is quite devastating statistics. ACEs is a bit of a buzzword really, nowt new as they've always been here, just that along with poor mental health, people are talking about them. They stand for Adverse Childhood Experiences. I will write more on these next time as my eyes are closing.