He's called Terry. He's my new 'VegetaPAL'. He was born out of necessity. She who must be obeyed ( FM! ) instructed me to make him in order for me to quit my snivelling over the fact that the precious first born left for Uni again. It seemed worse this time somehow! So here is my efforts. I raided the veg drawer- he'll be made into 'manky veg soup later' and my sewing box. I do have googly eyes somewhere but not where I thought they were. So he is a vision in silver. He is also a punk rocker, hence the safety pin through his nose. He's quite swede really ! ( groan ) 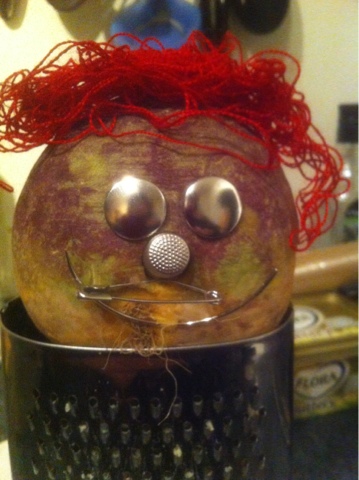 Email ThisBlogThis!Share to TwitterShare to FacebookShare to Pinterest
Labels: Fun with vegetables