I woke up at 6, which is a lie in really, and it was SNOWING! It’s now 7.31am and sunny and NoT snowing! As Sadie said in a post I read earlier this week, we Brits  are obsessed about the weather because it really is so bizarre at times!

We’ve had a lovely weekend. Went to the shore, bumbled around at home which is my favourite thing to do.

We watched Escape from Pretoria last night. Daniel Radcliffe is in it and plays an absolutely mesmerising part. It was brilliant from start to finish and my heart rate and breathing was glad when it finished as it was tense to say the least! It’s set in South Africa when the ANC was fighting its war against Apartheid. No spoilers from me though.

My next door neighbours are so fecking LOUD. Nice. But so loud. Their house is all painted walls and wooden floors so nothing to absorb any noise. He has a particularly loud voice as does the 2 year old. And someone is HOOVERING now which Incan hear about my TV that I have on softly in the background. And whoever hoovers rams it against the skirting and to be honest it’s starting to get right on my nerves. I do not think they realise how inconsiderate they are.

I tell you - it’s the same house that has housed 3 families bow since the old lady who was adorable died. And it has a bizarre pattern to it -

House renovation noise I do not mind at all because I know it does t last forever, but do it within reasonable social events hours yes? Long time readers will know that the first couple had children that were poorly parented - ( in my judgey opinion of course ) highly highly stimulated and entertained etc them the hapless adults couldn’t understand why they struggled with them... they totally renovated the house loudly and were loudly argumentative. He did all the house work, feeding of the children - which happened outdoors a lot - not at a table - but picnic style on the astroturf - the children grazed and played and were poor eaters ( I know this because of the way they complained to each other about how they couldn’t get them to eat any thing etc also bedtimes were the worst - the children didn’t want to go to bed and couldn’t sleep but no routines were in place etc

Couple number 2, renovated the house again - so all the noise etc fine - just endless it seemed. Babies came along - free parenting style again. - rude, tantrummy kids, again. Dad did the donkey work, feeding them, shops g, taking them out, again, ate in the garden - allowed to pee and the rest  freely all over the garden when being toilet trained, bed was gone 10pm - much screaming and then slept til late - kids were poor eaters too.

Couple number 3, who is there now. Absolutely screaming loud tantrums from the 2 year old who won’t sleep. The elder one has his name bawled constantly to get off his Xbox . He then has to parent his sister in the garden which means he winds her up and hurts her till she screams - mum will come then and yell at him and whilst she’s sorting out the little one, he will escape back to his Xbox. Dad does most of the cooking etc. But the little one gets to eat what she wants all day and is again fed outside!! She also just goes to the toilet in the garden - gets told off one time, but gets laughed at the next. Oh and they go on holiday WITHOUT the children - I HATE that. And they are non stop asking to borrow stuff - like the HG brand new circular saw and the power washer. He’s like NO go buy your own which seems mean really. However, yes, go buy your own. Saying no is hard though isn’t it!! But the parents are very entitled and their own parents who have been round ALL lockdown clearly dance to their every whim! Even writing about not wanting to lend them things sounds churlish!

There’s probably some sort of social experiment going on - see how much the judgey old cow next door can take before she snaps kinda thing. Yes my two went for sleepovers at grandparents but mostly we’d still be at home. I would never ever go on holiday without them. We did have picnics and ate outside - more of a treat mealtime rather than daily. I think the share of the housework/childcare was more me than the HG but he did his fair share.

We very probably do stuff that annoys the neighbours but I do not recall being so inconsiderate. When the kids were outside and got too loud, I’d tell them off! If the HG and still bow is doing noisy house work stuff- it’s in reasonable hours.

I have said in the past if I ever win big on the lottery I would do my best to try and buy next door! It could just be my storage facility for all the hoarded stuff haha

Crikey that wasn’t what I was going to write about today but the early loud banging hoovering ( that also gets done gone 10pm at night ) set me off! ( Oh and it is t just me - the neighbours on the other side have asked me how much do we hear them because they said it’s that loud on their side they could be in the next room with them! )

I try to be a good neighbour though, always polite and chatty over the fence- I even pass baking over and stuff because it’s a nice thing to do! The toddler is as cute as a button which is why she probably gets away with murder and out of the three, these are my favourites! With a little modification, some rugs, carpets etc, they’d be fiiine! The neighbours on the other side, young couple, in contrast, are as quiet as anything and we NEVER hear them!

How are your neighbours? Are you a lender of items? Or are you an ASKER of items?!

It’s week 5 of the 12 week programme and in truth I’m probably at Day 1 again! The menu slipped for no other reasons than wilful laziness. I’ve downloaded the Fast 800 book one on audible and listened to it whilst I sewed yesterday - the science sinking properly in and am ready to restart or reset this morning! The HG wants to go out somewhere and I feel bad for just wanting to stay at home!! But I just want to stay at home and potter about. Even if we go out early and get back early, I never get settled into projects properly! Bloody hell I am a right old whingebag this morning! Sorry if you are irritated by all this negativity!

Photos of the snow this morning! The peg bags I made, the hare one sold already. They are made from oilcloth and are fully lined!  And the little knitting project I’m doing - it’s a jumper for Luna Lapin - I am not sure if there’s an error in the written pattern or in my knitting but the cables don’t look quite right or even in the middle - however, the back and front are the same so this will be the back! The stuffed bunny won’t mind. I just want to knit it out and see. But looking at it now - I am going to frog it and restart because it is bugging me! 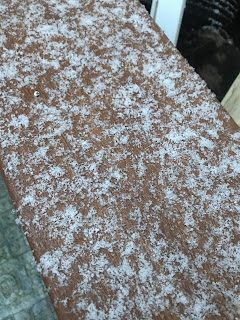 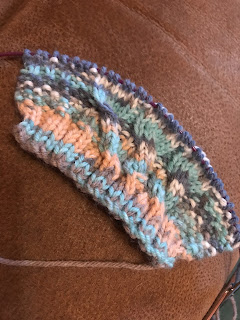 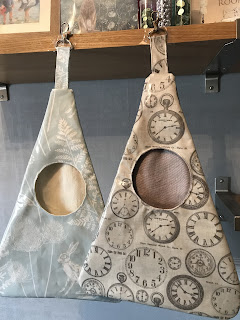 I’ve also started on another top for myself - again a jersey fabric which is really really annoying to work with because it just MOVES all the time! I am also going g to sort through my scrap fabric and recycle it - I have so much - a bag of bigger bits for patchwork quilting, smaller bits for stuffing things! Bit bigger bits for sewing things with and then lovely big bits for projects not even started yet!

Right my coffee is cold and I may go do some sewing stuff before I break my fast - 12-12 seems the easiest but I’d I can I’m going to try and do 18-6. I’m going to keep listening to the book bit I also noticed that Richard Osmons 2nd Thursday murder club book has been advertised - I really enjoyed the first one so maybe go look see for that too. Have a lovely Monday everyone. I will let the HG drag me away from the house and have a lovely time with him. Cottage pie for tea tonight for them and a FAST 800 meal I already made out the freezer for me.