Not I said the boy
Not I said the HG
HMMMM
I know it was not me. It must have been the lodger. He's lived here rent free for years. I think you might know him. He's really clumsy, breaking numerous things when no one is looking. He's really greedy too, famous for eating the last biscuit, the last piece of flapjack, the last packet of crisps.  He's the one who  uses the last of everything then doesn't  replace it - soap, milk, loo roll etc.  His name?
He's called Mr Nobody.

Yesterday morning started off beautifully. Stripped the bed. Glorious sunshine. Walked by the sea putting the world to rights with my friend. Got home. Was about to start the serious job of relaxing in the garden with a bit of knitting when the dulcit tones of the HG shattered my peace.
Mr Nobody had LEFT THE FREEZER DOOR OPEN.

Now then. Let's look at the evidence. It was the freezer in the cellar. My overflow fridge freezer. I rarely go in the cellar. I have not been down there in a week. Mr 19 said he hadn't been down there. Step forward Mr Hunter 'up and down the cellar steps like a bride's nighty putting his MAGGOTS IN MY FREEZER' Gatherer. Nope, not him either. How odd.

Case rested. Of course had it been myself or Mr 19 we'd have never heard the end of it. Eventually came plausible explanations of how it happened ( yes love, you didn't shut the door properly )
Anyhoo it had defrosted. Stuff was still icy and some things were still frozen solid. His maggots were fine.
Like I flipping well cared!!!!
Please note they are in well sealed containers in bags in their own drawer. No contamination danger at all. Plus they are dead before they go in there !

BUT we had an interesting  lunch of sausage, pizza and scampi salad. I roasted a turkey on the hottest day of the year so far and luckily I've been using stuff up so it was fairly empty! I threw away some yellow stickered pate, stuffing and bacon that truthfully I'd forgotten I'd slung in there.
I got up at 4.30am today - when Mr 19 was just getting in from a night out ( ! ) and in the oven now on slow cook mode is some shin beef for a stew and a whopping joint of beef. It'll be left to go cold and frozen in packs ready for sandwiches and easy mid week roast beef teas!

It was just one thing I could have done without! The turkey has been stripped - it wasn't a massive one, it was the free range organic bronze one I got from Sainsrobbers at 75% off! A breast has been frozen whole. One will be sliced up and all the leg n thigh meat will go into a turkey leek and ham pie though I might create a quiche too.

It's Monday today, a bank one, but it feels like Sunday! The sun is already hot so I might breakfast in the garden.  On Saturday  we went to Yarkshire. ( sic)  We stopped off in Skipton and I got some good bargains and met a Morris man called Moss. A jolly nice chap he was too. He was out for the day with some friends. 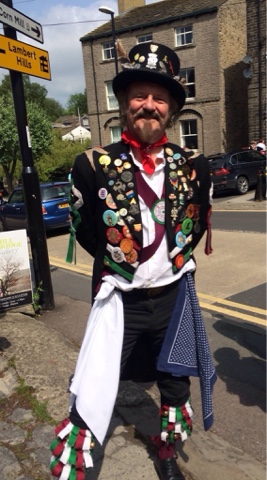 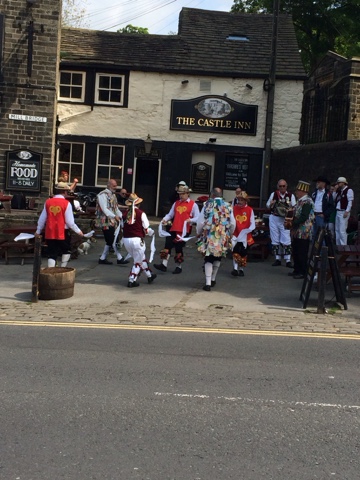 Much handkerchief waving, dancing in clogs and jingly bells ensued! Oops, I know I showed you these yesterday too!
I got two lovely frocks off the market - Indian cotton and sequins! £5 each.  Some pies from the award winning pie shop on the bridge were eaten and the we went to visit elderly relatives via Embsay Mill. I only just remembered I was going to take photos to show Pam but I was too busy buying gorgeous fabrics in the sale!
Anyway I also went to the brilliant fabric shop in Shipley called The Shuttle where I got yards and yards of jersey fabric to make dresses and tunics for me at ridiculously low low prices. I got 4 metres of one for £2.20! So at that price it doesn't really matter if I go drastically wrong - it'll be my first attempt at sewing jersey. Photos tomorrow.
We set off back and called at Keelham Farmer's Market type shop. It has a great produce choice and quality is outstanding. We bought Barnsley Chops which we can't get at home and also bought some mutton leg steaks to try. We bought loads of pies, some pork belly and some strawberries. We had the lamb n sheep last night for tea. Yes, despite all the frozen now defrosted meat on offer, I wanted to eat it fresh! Absolutely divine! Mouth-wateringly juicy.

Well,it's now 7am and I've been up for two and a half hours.  Feeling sleepy. The starlings are very noisy but very non plussed about me watching them. I was laughing yesterday watching the poor scratty knackered looking parent starling frantically feed its noisy fluffy brown bigger than it offspring. I know how it feels! I tried to photograph it but my
iPhone camera isn't that good! I videoed it then took a screen shot. 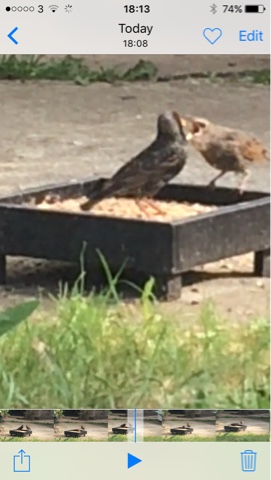 Other visitors were goldfinch, blue tits, great tits, coal tits, doves, magpies and Jackie the jackdaw. No sparrers  ( I pinched that spelling off Sheila Teatowel ) though. None that I saw. The starlings are a right maurauding bunch of pirates. Practically divebombed me when I put the mealworms out. They had to do their best hummingbird impression to try to get the mealworms out of the Robin feeder! I think they are brilliant birds. I reckon I could get them taking mealworms from my hand. Might try later!

I've waffled on now for much longer than I was gonna! Enjoy your bank holiday. I intend to. 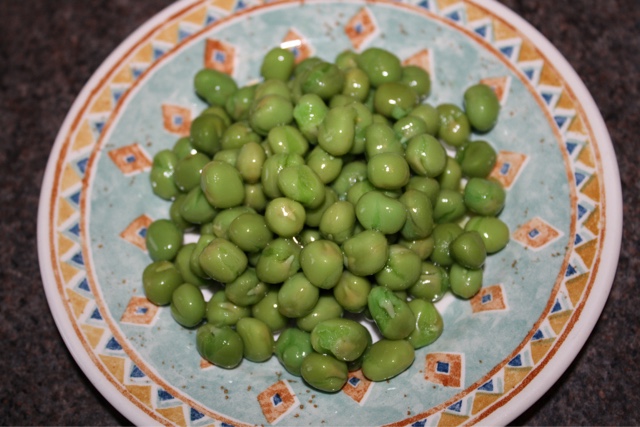 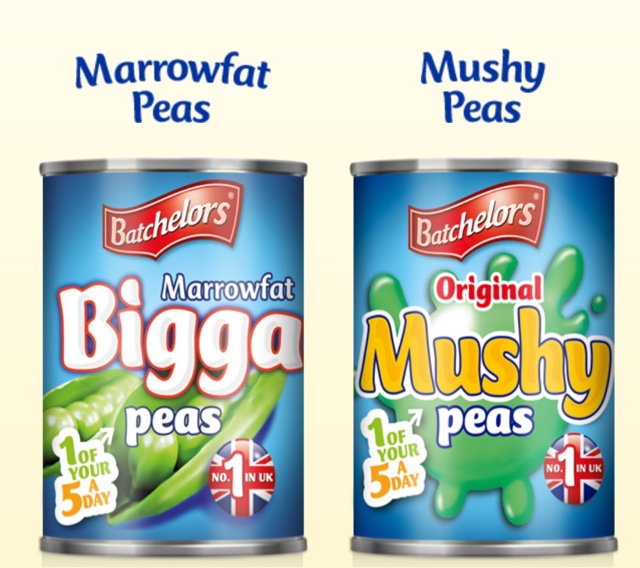 Now then, I adore Marrowfat peas. I dislike tinned mushy peas much preferring to make my own using dried Marrowfat peas! But tinned garden peas?? YUK!
Posted by Rachel Flowers at 07:15