Thinking of a title to include the word May,  made me remember one of the games I used to play in Primary School. I think it was a more girly, polite version of British Bulldog. I only remember me and my girlfriends playing it. Bulldog was played by all. But it was full on danger play! 'May I' was far more refined.I think it was a hybrid of 'What time is it Mr Wolf' too. It went along the lines of
One girl would be 'on' and against the wall, if it was wolfesque, or in the middle betwixt two walls if it was more Bulldoggy.
The rest of the players would be in a line against the opposite wall and chant. I might need some of my childhood buddies to leap in here and correct me because my memory is hazy.
" Mary, Mary, may we cross your golden river?"
Now, I have NO idea why she was called Mary or why the river was golden.
Mary would then declare something like
"Only if you are wearing somethinggggggggggggggggggggg blue/insert other colours/variations here."
I think then if you were wearing something blue etc jyou'd take a step forward. Say "May I?"
And then 'Mary' would give the nod, and all the blue wearing cherubs would make a dash for the other wall trying not to get caught. If caught, you'd join Mary in the chant.
Ahhh the good old days when we could, with absolutely ZERO consideration given to Health and Safety, do hand stands against the walls, to the songs
Let's go for a little walk, UNDER ( cue to do the handstand ) the moon of love.  Or
Those magnificent men in their flying machines, they go UP ( cue handstand ) they go down ( back down etc ) . We could get maybe eight girls doing synchronised handstands on the hall wall! Again, boys didn't join in. When we got to Junior 4 ( today's Y6 ) we'd play the heady game of kiss, slap or torture. Where if it was boys get the girls, and  you were caught, you'd squeal kiss, slap or torture and depending on which boy had caught you, the choice was made! When it was girls get the boys, they'd often opt for the violent option. I was cracking at Chinese burns ( the torture element ) . We would also sometimes play marbles, in. The. Drains. Marbles. In. The. Drains people.
These days - CHOKING HAZARDS, GERMS AND BACTERIA HAZARD ENSURE DRAINS ARE COVERED AT ALL TIMES.
Anyhooo, that trip down memory lane wasn't at all what I was going to blog about! I was going to share some gardening/craft room pics because that's how I spent my my first May Bank Holiday ! But to put you on....
Here's my hanging basket finally brought out of my kitchen! 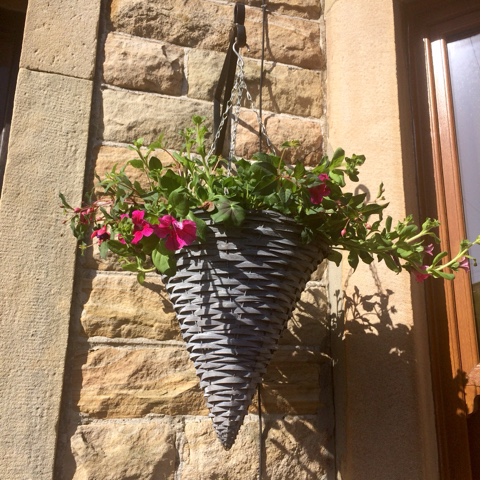