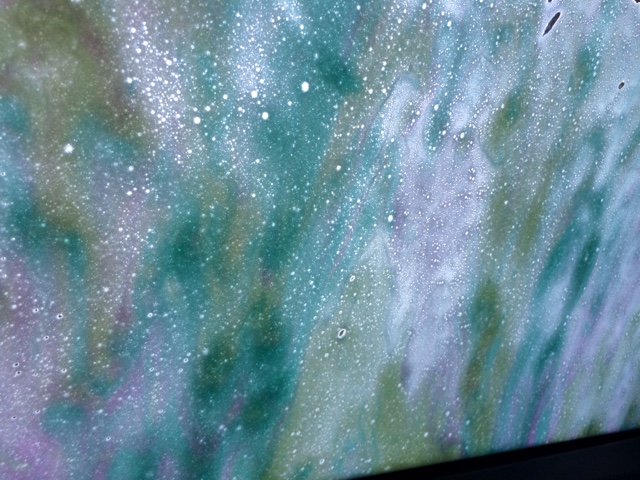 So, picture the scene....
We'd driven Oop North to Carlisle, to pick Miss 21 up from the train station. The HG and I were treating  our offspring to full on car karaoke - our weapon of choice was Jimmy Sommerville and his greatest hits with Bronski Beat and the Communards. We knew they were enjoying it. Mr 19 was just pretending not to listen with his headphones on. Our tuneful falsettos filled the car. We were on our way to a posh garden centre for brunch. We drove down the dual carriage way. When suddenly.
KERRRRRSPLAT.
THE AIR TURNED BLUE. THE WINDSCREEN HAD TURNED WHITE.
It pwas literally just as if someone had hurled a can of creamy white emulsion at the car. The roof surely had a dent in it from the level of noise of something dropping from a great height only can produce. The full windscreen was covered. The side windows were splatted and the HG furiously applied screen wash and windscreen wipers! We were on a busy road! We couldn't see a thing for about three seconds which is a really long time to be sightless at 60mph on a busy road!
It also stank. And you know what I'm like with smells. I was dry heaving. The kids were LAUGHING THEIR HEADS OFF. The HG was still effing and jeffing. He'd only just cleaned his number one love the day before. ( That's how we rank at out house. His car, then us! We know our place.) I can not convey enough how much bird crap was on our car. The full windscreen, the roof, the back window, the doors and windows too. A lot.
I swear it MUST have been a teradactyl or an albatross. We've a big car. That was a copius amount of shit!
The HG suggested it was more than one and must have been a flock of swans or something. I wondered if they flew in formations and then all decided on a target and 'bombs awayyyy'!!
We were hysterical with laughing!! We rapidly found a car wash and a handsome young polish chappie serviced us well. He was laughing at our car as we drove up! We gave him £6 for the works. We finished up in an automated car wash that I've not been in since I were a lass! The photo is of the pretty soap suds in the machine. We emerged, blinking into the sunshine, all shiny again and drove off on our way. It was so so funny!
Anyhow, after a lovely brunch and a perusal of the goods - they also have a large pet section - they sell SKINNYPIGS! Super cute hairless Guinea pigs, we then drove back into Carlisle to drop Mr 19 off at his Karate appointment. He was Grading. We then took Miss 21 off to Gretna for a 'look' around the shops. We 'looked' at lots of things for her, had a very nice coffee stop and enjoyed her company. We then set off back to drop her at the train station, which we did and after a traffic jam stopped us in our tracks, she got out of the car and ran to catch her train with literally no minutes to spare! I'm glad she caught it as it'd have meant a 57 minute wait for the next one.
We then went to collect an extremely tired Mr 19. Four hours of Katas, sparring and discipline yielded this

I'm now the proud ( so so proud ) owner of a Black Belt boy! The dedication he has put in has been immense. It's taken nine years. I could have been a black belt by now had I gone with him instead of sitting chatting with the other Karate parents!! I'm also a bit 'sigh' as I feel like my parenting is done! I know this isn't really true mind!
Saturday was finished off by a quick visit to the supermarket to let the Victor choose his tea. The honed athlete weighed up his options and went for..... A box of Cookie Crisp cereal! I indulged him. He deserved it! After his sumptuous feast, he went to bed!
We watched a bit of telly and then too went to bed! Tired out.
Lots of love from
Rachel *didnt win the lottery despite the giant bird poo incident* Radiostar xxx
Posted by Rachel Flowers at 08:39