Good morning,
it is the first morning of the Easter Holidays and the beginning of my week 2 stay the eff at home confinement.
The Prime Minister has been admitted to hospital and I watched the Queen last night and was choked up after her address. She is amazing.

We spent yesterday mostly outside in the garden. The HG and Mr 22 are making a box to house a speaker. The HG is a fully time served good old fashioned carpenter and joiner. The box has been constructed with dovetail joints and is a thing of quality. It also kept him busy! I faffed about in the garden a bit, gossiped over the fence with the new neighbours on and off and made a fabulous Sunday roast chicken dinner with stuffing and whopper yorkshires. No room for pudding.
The HG and I have been watching a TV programme called New Amsterdam and it is such a good feel good hospital drama - great escapism. I write this now with a sleepy Bluebell on my lap and the final episode of Series 4 of Fear the walking Dead on - our early morning viewing.  I absolutely love The Walking Dead - and The Talking Dead. And all things end of the worldsy!

I am also mid read/listen of  my very first audio book. I wasn't sure if it was for me but decided to give it a go. I couldn't decide whether to try something new or go for something familiar that might help me keep track. Now I downloaded this book about three weeks before the first case of Corona virus was recorded in the UK. Has anyone read it?  It's The Stand by Stephen King. Without wanting to give any spoilers away - it is about a superflu that ends the world! Talk about co incidence!

However, I saw on Twitter last night, and I know, I know, one should not believe everything one believes on the internet, but Italy recorded fewer deaths and fewer new cases for the first time. Let's hope the tide is turning for the better. I don't know if you are on facebook or not but I am and we have 'local' groups on there posting photos of beauty spots STILL busy with people not staying 2m apart. I get that people want to go out and that daily exercise is allowed. but use common sense folks! Or take some extra maths lessons and learn how far 200cm really is! Also signs that say 'meters' make my eye twitch!  I take Bluebell on the field behind our house and we have had it to ourselves so far. If someone else brings their dog on, then we keep our distance. I have noticed though that people are also not waving or calling hello! If someone is walking towards me and I cannot get out of their way - when they are clearly making no attempt to do the same, i hold my breath and turn away as I go past! So I cannot say hello!

Today I will probably spend the day as I  would normally  - social distancing is what I was always practising for the main. A little bit of sewing, knitting and pottering. I think today is a little cooler than yesterday but might hunt for some washing. I got all the bedding out and line dried yesterday. I might have a go at making meringue nests later on. But I need to stop eating all the things! I washed and tidied out my tea towel drawer yesterday - I think I will do the same for my main cutlery drawer. How is it when only clean things get put in there - it gets so filthy?

The photo situation on this laptop is beyond infuriating! I have 'pictures' and I also have 'photos', I like 'pictures' as I can use that easily. The 'photos' sorts my snaps out for me and I do not like it! What a first world problem to have!

Right - off to get a wriggle on. Have a good Monday. 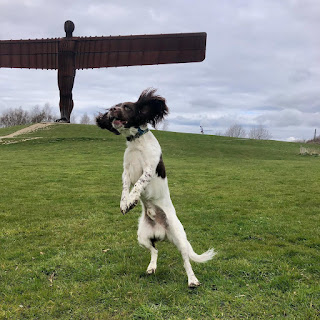 Here's Freddie loving life at The Angel of The North!