A wander round the garden.

It's Easter Saturday and it was raining at 6am. Its now warm and sunny and as the dog was busy sniffing every blade of grass that a blackbird might have walked on I had a look see at what's growing. My first deep purple single petal tulip was open. My photo does not do it justice. I have some frilly double petalled snake skin patterned ones in the front and I confess I do not like them! I must prefer these in the back!
My bluebells are popping up all over the place and after reading, I think it was Marlene's post yesterday, I was aghast to learn that mine my not be true native British Bluebells. I have done a bit of googling and it's still a bit too soon to tell at this stage from my research. ( My research consisted of typing in UK bluebell buds v Spanish bluebell buds. and how to tell a native bluebell from the rest and bluebonnets usa )


Someone on here will definitely know more than me! My big either rosemary or lavender bush is in bloom ( haha I am no Alan Titchmarsh ) and two of my peonie plants are budding. One is a big cerise pink single petal which year on year without fail signals a hurricane, because the day it blooms, high winds get up and smashes them to pieces!!! ) and the other is a bigger double petal, longer and narrower in style and in a deeper red colour, I have a third peonie plant which I call my toilet roll flower, it's later than the others, it's taller than the others and needs staking up because the flower heads are so full of filly pale pink petals but when the buds are forming, you'd think it's going to be a red bloom and it also attracts ants on the buds. Long time friends of this blog have seen my photos of my peonies before -  they are over 100 years old! I've just remembered that last year I harvested some seeds - No idea where I will have put them? I dried them in the sun and then ....hmmmm no recollection at all! This year I will do the same and blog about it so I have a written record! 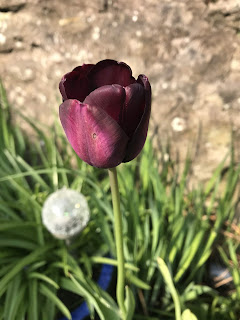 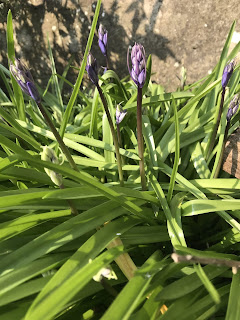 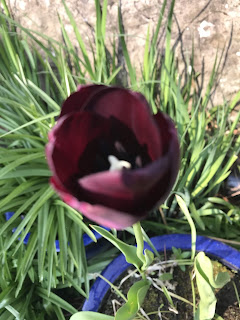 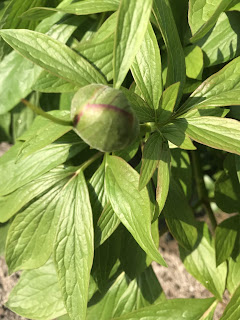 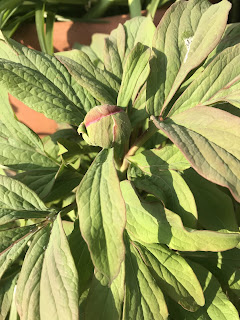 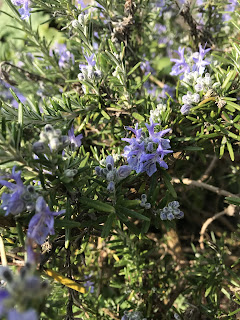 Yesterday I also made some Greek flat breads to go with our chicken kebabs that we had again. But this week I was using boneless, skinless thighs. A bit juicier meat and the HG declared that last week's were better. I declared that he can make his own next time! Also last week's flatbreads were shop bought, so he could feel free to pop along to the shops and buy his own. Also I thought about warning him not to choke to death on eating them, but didn't!!

I found the recipe online, yeast, bread flour, salt, sugar, warm milk/water, olive oil. Mix and knead and leave to rise. Its a nice soft dough - possibly the oil? My bowl here looks like it has black marks on it, but it was the light from the oil I greased it with. Anyway once doubled in size after about an hour.... 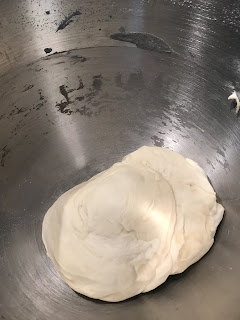 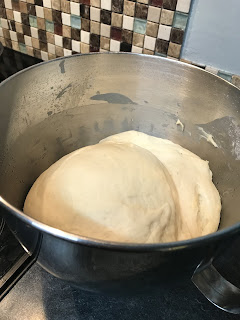 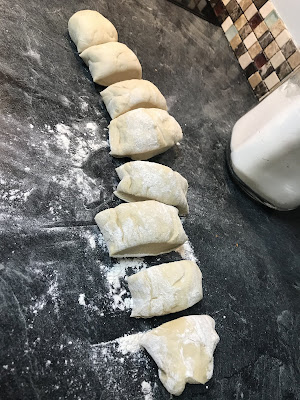 Divide into 8 and leave for a minute or two to relax. 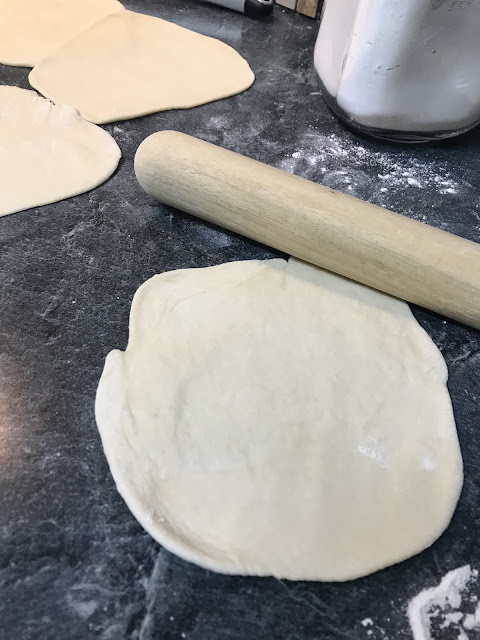 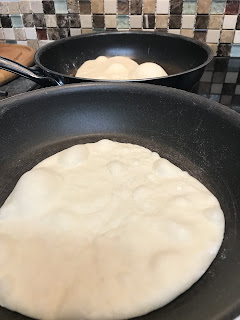 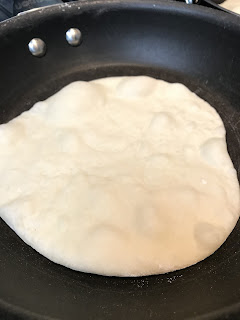 Place into a hot dry pan and leave for 2-3 minutes until bubbles form.... 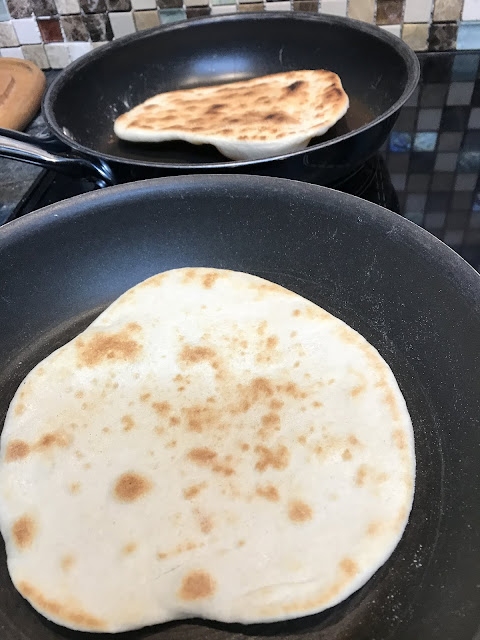 Flip over and cook for a further 2 - 3 minutes. 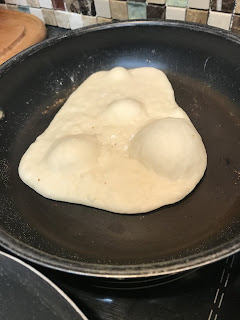 This one - has the look of an alien! 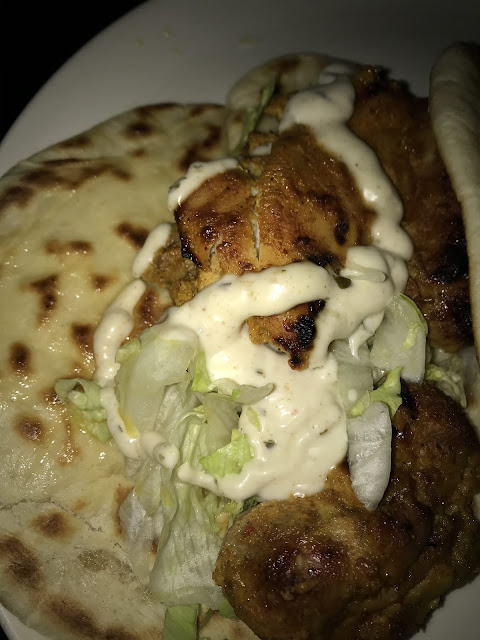 To serve, brush the flatbread with a little melted butter, add shredded lettuce, the chicken and some dressing of your choice ( garlic mayo for me ) and enjoy...(or complain about if you are a certain HG of mine ). 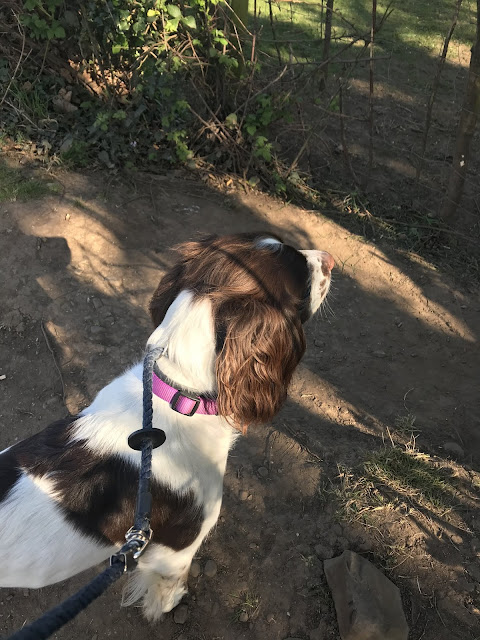 Bluebell and I had a saunter down the canal near us, fortunately not meeting many people at all and as per we had to stop and pause and watch the animals in this field. They are normally in the one closest to the canal towpath but I'm wondering if the grass was greener on the other side or perhaps there are babies a coming! I'm afraid you are going to have to squint and zoom in, and this pic was taken especially for Suzanne! It's little alpacas! And some sheep! 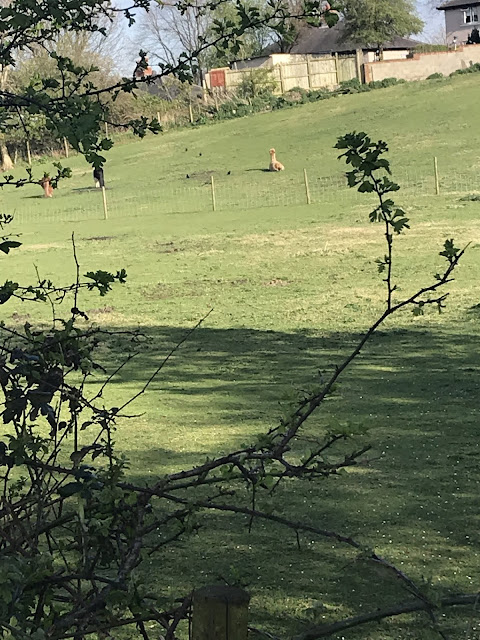 I also baked on Good Friday. Some toffee buns, with Cadbury's dairy milk cream ganache with some Cadbury's mini eggs on the top. To save myself from eating the lot I passed some over to the new neighbours. Their little cute as a button almost 2 year old shouting 'thank you' over the fence warmed the cockles I tell you.  I had good old fashioned beans on toast for tea on Friday as I was sick of eating meat! I seem to be never ending catering and cleaning up. I was maybe feeling the feels because when I woke up on Saturday I was a bit mardy. 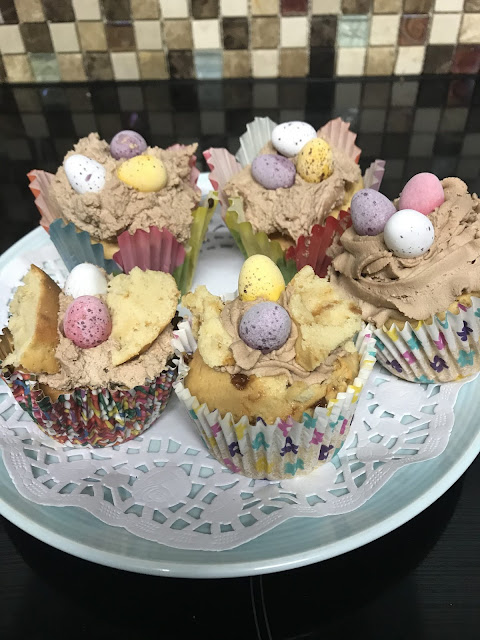 I felt a little overwhelmed and down about things . I didn't sleep well the night before and had some very vivid and disturbing dreams - which is a common thing amongst human beings right now apparently. So it was lovely to bump into ( from afar if you will ) one of my lovely friends who I work with when I was out with the dog. It was so nice to see a real face of someone else other than the HG and Mr 22! We gave air hugs from across the road to each other and it was hard to walk away! So cut to watching BGT and filled my heart with the cuteness overload of the sausage dogs and then promptly bawled my eyes out at the sign out loud performance and then cheered as they got a golden buzzer!! Sorry if you haven't seen it yet! 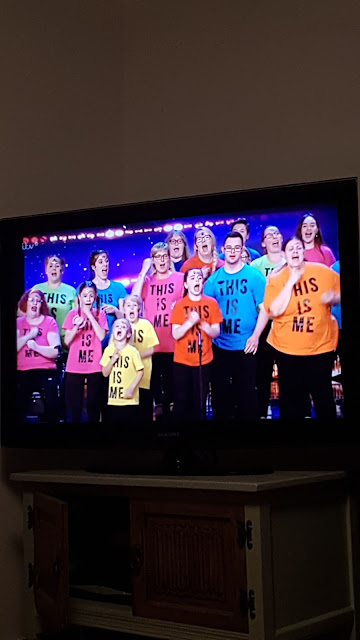 So this Easter Sunday has started gently with feet up, frothy coffee, sewing on the telly. The grass was heavy with dew as I let the dog out and my toes do feel a little chilly. Maybe a cooler day is on the cards. Heavy rain would keep people in. So many of the people who live further up the street are pushing the social distancing in my judgey opinion. Yesterday as I came back off the field along the back ginnel, there were three households having a party, with bloody chairs IN THE BACK not 2m apart I noted and I had to pick my way through them towards my house. Getting too close to them. I held my breath as I went past. These houses back onto the school field, and one of them had set a pair of ladders up and over the railings, and had set up a badminton net and was playing merrily away. The little regard for rules and the law leaves me fuming. Whilst they were not doing any harm per se, the fact that you have to use a ladder to access the field maybe should make you stop and think - I SHOULD MAYBE JUST STAY AND PLAY IN MY GARDEN.  I just called them allsorts of names under my breath and glared at them from behind my sunglasses. I told you I was mardy. We are having roast beef and all the trimmings. for tea. I will be making another egg custard as I've lots of eggs. I am going in my craft room for a bit and shall have a lazy day of it! It will involve taking madam out for a run and I do have an online doggy class to do at 4.30pm! It was quite stressful last week so I'm not sure my blood pressure can handle it!

Have a lovely day everyone