Last few days round up

This is a photo heavy show and tell post. I needed distracting for finally biting the bullet and having a go at putting in a claim for Universal Credit for the HG - even though I told him it was probably pointless due to the fact I am still earning - but you never know, be no worse off for trying.....EXCEPT IT ALMOST CAUSED ME TO ILLEGALLY DRIVE TO THE CLIFFS FAR AWAY TO THROW MYSELF OFF THE TOP! He will get something from the self employed scheme thing in June but to go from having money coming in to zero is hard to take. Even though there is food in the cupboards and this month's bills are paid...peace of mind isn't priceless.

I keep wondering aloud what it must be like to have a mysterious benefactor in case the universe listens.........

Anyhoo, I'd forgotten what an absolute utter ballache it is - the last time was when we had to claim when he couldn't work due to having his kidney out etc. What baffled me then and now is that we have to claim as a couple. It does my head in. So dutifully, I started the process, then you have to get a linking code thingy to link you together. I think you should just have to provide your names and national insurance number - they can then see how much you've earned etc and decide accordingly. However no, I then needed to go find my income details - a pain because it's all online linked to my work - so cue much swearing as I had to piss about doing that. And here's the other thing - they didn't ask me  - the girl -on my bit if I was pregnant or on maternity payments, BUT THEY DID ON HIS BIT - the boy!!! Is this the gender thing going all PC and insane? So eventually I gets through it all - you each have a to do list - but you cannot go back and amend anything until your to do list is completed.  AND just when you think you are finished and are about to open that bottle of gin even though it's only 8.30 in the morning, you have to be able to identify yourself! More details needed on this identity system. Filled everything in, no we can't recognise you.  You then have to try and answer different questions to also further prove who you are. Honestly, ridiculous. Clicked everything through and then was told an 8 hour wait to see if it worked. I tried to log on this morning to see and I was sat down comfy, with the dog on my lap, and it said we have sent a code to this number. Well the phone with the number on it was all the way over there on the mantlepiece. So it will have to wait. I'm blogging now. The code will have expired by the time I drag my big fat bum off the chair and I cannot, will not,  disturb a sleeping Bluebell.
Of course I DO understand why they do all this and I have even more no idea of how people do this - it's far easier to go out to work. But I did feel like emailing them saying that they knew exactly who I was because up until last year they were STILL writing to me annually to inform me that we were not getting any tax credits!! About 6 years after we were no longer eligible!
I did a spot of sewing with the off cuts from the quilt and the cushions I made last year. The bestest ever Christmas presents received from me to my friends - they tell me - are the bowl cosies I made them. Even though they all sent me photos of them wearing them on their heads on Christmas Day! I have a set of larger pasta bowls that the HG also uses for porridge ( think Daddy Bear portions ) and the Bowl Cosies I made for us are just too small so I made him a matching one to his quilt from the offcuts haha and another one with cushion fabric. I zigzagged the pieces of wadding back together and set off sewing. 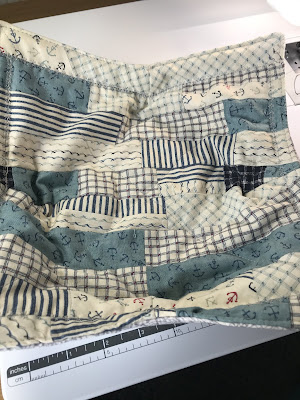 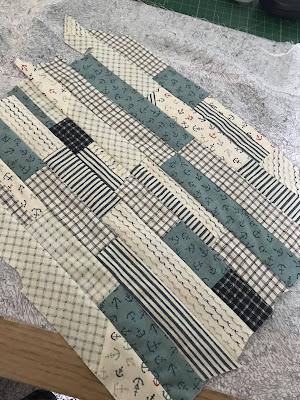 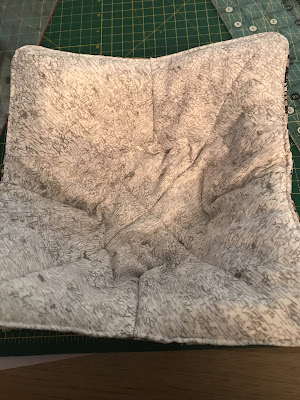 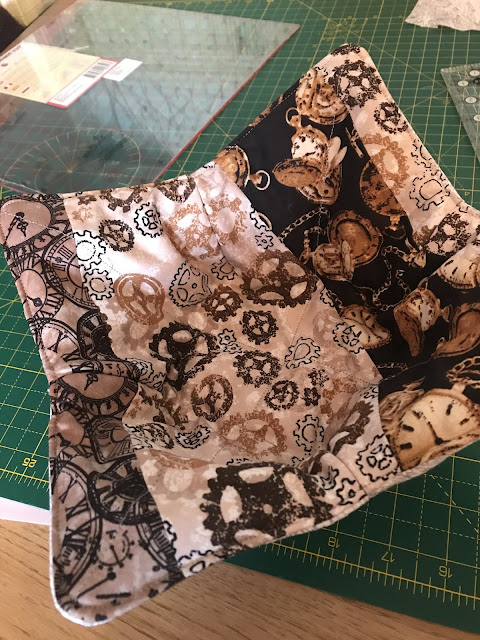 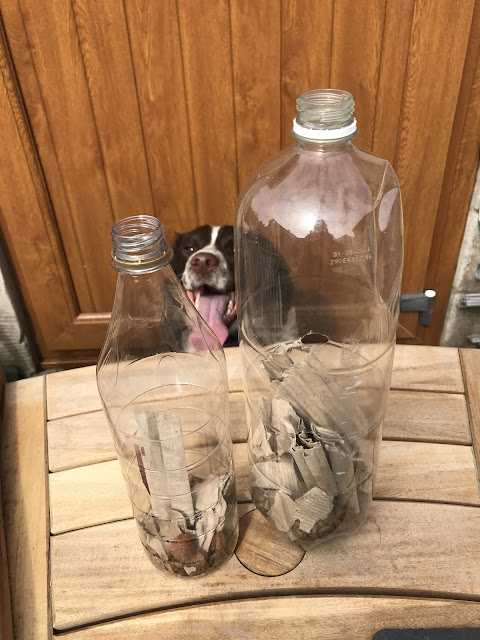 Decided to have a go at some enrichment games for Bluebell. Recycling too! Put two holes through plastic bottles and some torn up cardboard inside. Grab a garden cane and jam it into the netting round the rhubarb and a bucket handle. 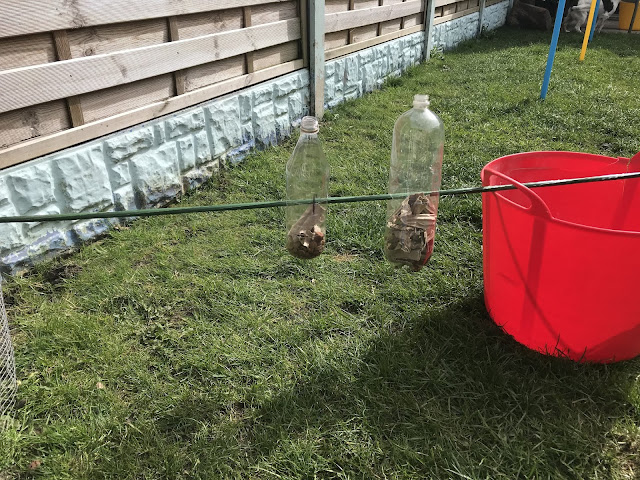 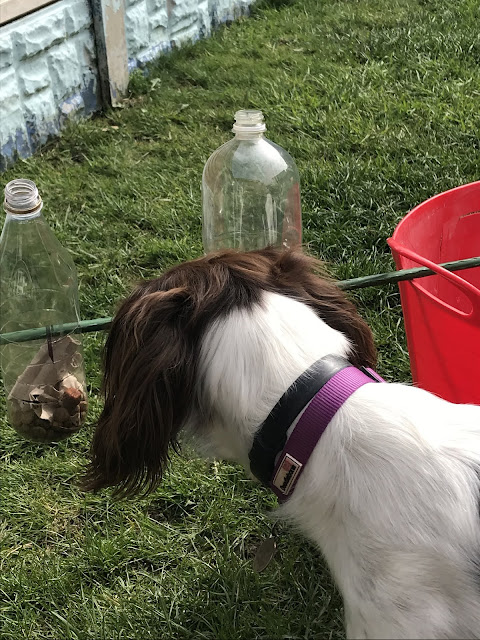 Enjoy watching Madam work out how to get the treats. Disclaimer - she does have a shop bought inside one of these so she already had an idea but it was funny as she first tried to simply bark the biscuits out of the bottles! Have put it away fro a week now and she can play with it again another day. Something else we did was simply drop a ball into the oversized bucket. It took her a while to figure out how to move it to get to the ball. 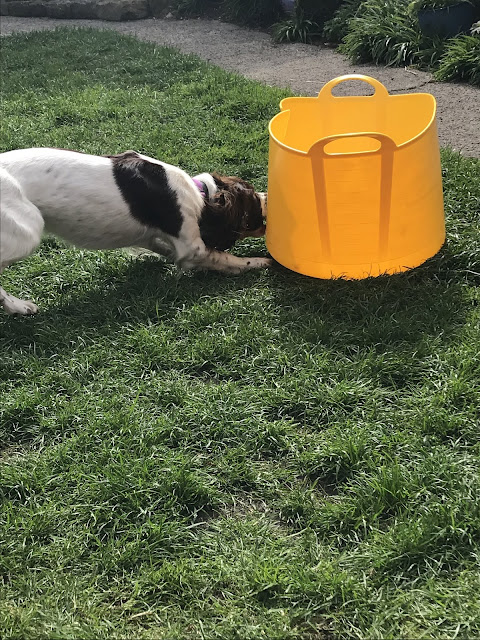 I do this quite a bit with her too. Especially the day before recycling. In side this box, is another box, and another box etc with a  few treats hidden in there.

Did any of you watch Quiz? I won't post any spoilers, but what a well crafted show it was. I have my opinion on the verdict. Great acting from all involved too. Today looks set to be warmer than yesterday - I might get the paddling pool out for a bit of enrichment to Bluebell. I've a meringue to make using the egg whites left from yesterday's egg custards.

Have a great Thursday. It's set to be gloriously warm here. And no rain forecast even beyond next week! Who knows what the world will be like next week?