Hellooooooo! What a wonderful wonderful wonderful day. If you didn't already know, finally, after forging a strong friendship over the tinternet, email, post and phone calls, me and Tracey met up today.
Between us, with no phone signal and very weak wifi, we somehow managed to agree to a venue and time!
I was too excited to sleep. Well, the biblical rain woke me at 2am and I took advantage of the slightly stronger wifi to catch up with blog land.
I did nod back off in the very comfy bed and woke up to the view of a Kingfisher on a branch.
( this is where we are staying by the way for those asking ...
http://www.valleyviewholidays.co.uk )
I received the message
The Puffing Billy 12.30
I sent one back.. Bring a cool bag and an ice pack!
So I faffed about in the hot tub before leisurely getting sorted! Tracey actually arrived at 11.30am so we quickly got our coats on ( still monsoon conditions ) and drove to meet her!
I peered in the doorway and saw my friend and her lovely MW and we had the loveliest  of mega hugs!!! Even though it was the first physical meeting, I thought it  felt like the most natural thing in the world. She then presented me with a pair of hand knitted socks which I'm wearing now... 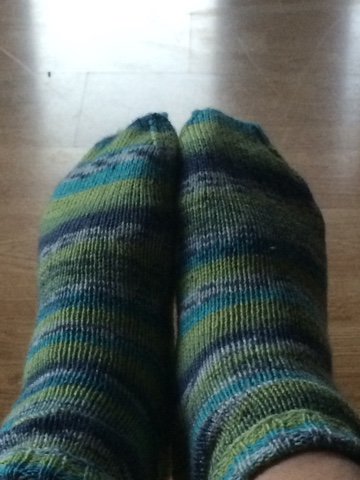 No awkward silences. No actual silences at all! Both chattering away ten to the dozen about anything and everything!
We'd booked a table and ordered our food. We were laughing about poncy food served in flowerpots and on roof tiles and chips in buckets.... Cue our meals... 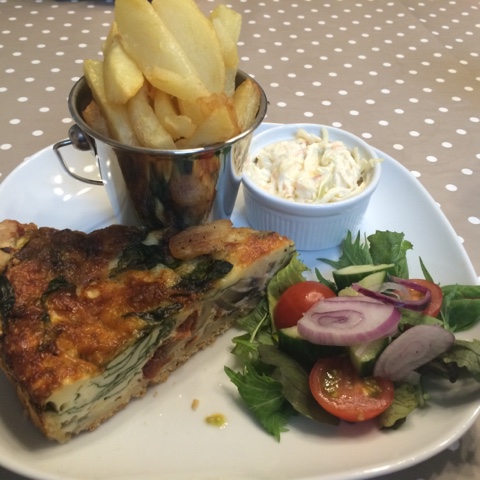 Hehehehe!!! That quiche, by the way, was bloody good!
Tracey took pics of all the food - she might put them up on her blog. We looked at the map and decided we'd be total tourists and head to the coast. Clovelly ( I think it's pronounced clo rhymes with snow and velly rhymes with fully - snowfully Clovelly )
was chosen. Tracey was pleased to return to somewhere where she'd been as a child.
It was a breathtaking place. The views took my breath away. The bloody steep climb back up the cobbles took my breath away!
I minced down to the shore line like a 99yo lady. You see, I've a dodgy knee that's actually ok right now and a weak ankle. I did have proper walking sandles on but gingerly stepping downwards a millimetre at a time at practically a 180 degree vertical angle was hard work!! I was really nervous about killing myself on that downward trek!! There was much stopping to pause and admire the view. The sun was hot and the sky and sea were a crystal sapphire blue. 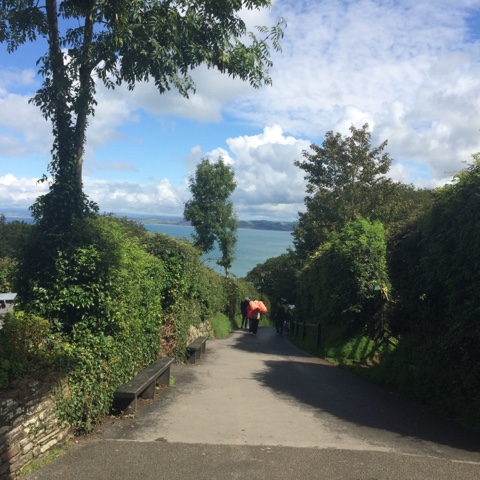 This top bit is actually Tarmac and I'd class it as a gentle incline compared to the rest! I joked about hoping there'd be a Stannah Stairlift at the bottom to bring us back up.
The cobbles were not like the cobbles we have Oop North - flat and round and relatively easy to walk on. The cobbles were thin disc like stones set perpendicular to the floor. 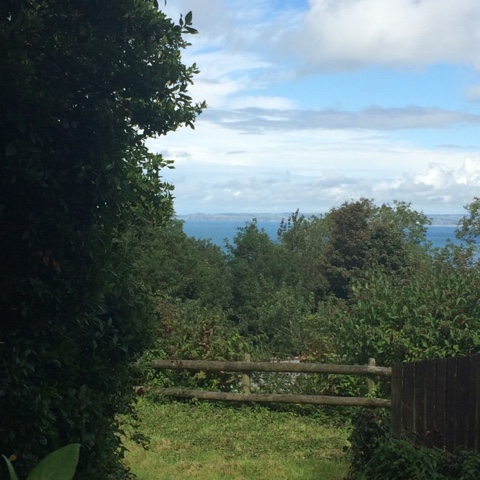 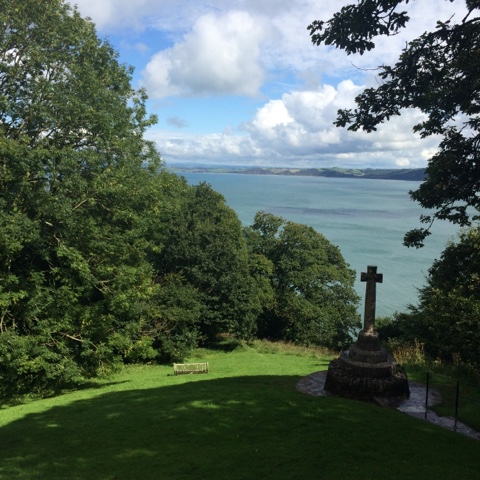 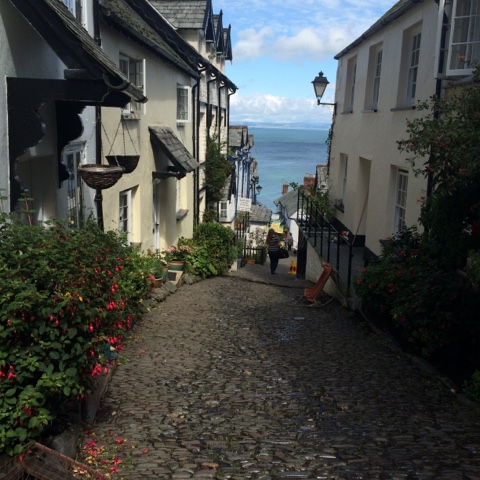 The locals use sledges to pull things up and down! It seemed like our descent was never to end, but we finally made it to the pub! Where me and Tracey claimed two seats and left the menfolk and offspring to climb up the harbour and look out and watch the porpoise in the bay!
There was a waterfall along the beach.. 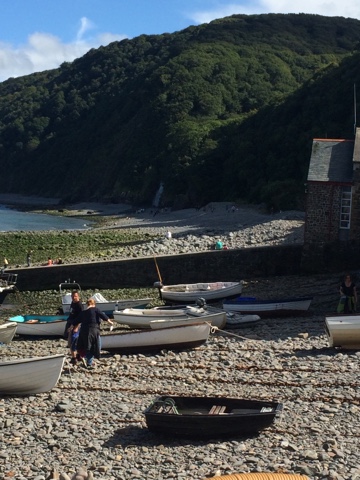 And a sign asking people not to throw stones in the harbour!! Well who put this lot here??? My feet/ankle/knee couldn't take the thought of the rocky beach, so we admired from afar!
After a rest ( and a chat ) Tracey was cajoled into walking back up with the rest of us! She was yearning after the landrover which was taking folks up and down the cowardly way!! I'd decided I wanted to walk back up so I could properly take it all in, instead of gazing intently at the floor!
Bloody hell that was knackering!! But I was very proud of my little fat unfit self to get to the top where we all quickly replaced any burned calories with a delicious ice cream
Ice cream details
Me - candyfloss
HG - Rhubarb crumble
T- vanilla
MW- coffee latte
Girlchild - Eton mess
Boy child -Toffee fudge
Mmmmmmmm!! I really struggled with the choice! There were too many to choose from! No photos because we scoffed them too quickly!!
Oh by the way, the Thunder and Lightning ice cream I had last week was
Vanilla with chocolate /coffee and caramel icream with honeycomb in it . Mmmmmm!!
Anyway, we sat and chatted until it was time to part! I got to say hello to her Grandchildren via FaceTime! Having discovered we are not actually too far away, tentative plans, if we've time, were made to maybe call and see them at home at the end of the week. More hugs and we went our separate ways.
It was a bloody brilliant day. Oh and why did Tracey need the cool bag? Well
My present to her was some of our favourite cheese. Lancashire Creamy Mild from Dewlays in Garstang ( it's award winning you know!! )
I'm signing off now, tired and happy - looking forward to reading Tracey's view on the day!
Lots of Love from
Rachel *too tired to think of a witty middle name* Radiostar xxx
Posted by Rachel Flowers at 20:37