It is actually day 29 today. I think I've been counting from the 16th July!  although that does include weekends and I don't officially include them as we get them off anyway!! Actually too, people call this the 'six weeks holidays' when in fact I won't have actually had six full weeks off at all!  ( cue angry uprising from non school workers)
When we went on our ( shopping/touristy not walker/rambley) tour of the Lakes at the weekend, we first went to Ambleside to a garden centre where I bought a new blue pot for the delphs. It was half price with an extra 15% off. Next stop was Windermere for a wander. We parked out of town for free. We found a sweet little sewing shop and I spent a whopping £2.10 on some rik-rak edging. We sampled some award winning pies before continuing our journey home via Grange over Sands. It's very steeply hilly! We parked out of town for free and walked down into the town and onto the prom. This is prime salt marsh lamb land. The Bay itself is treacherous. You can only walk across it with a guide appointed by the Queen. That's true!

T
It was a lovely sunny day but the view across the bay was hazy. 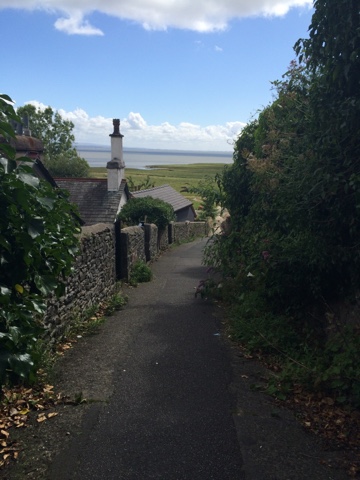 This was the very steep little lane we nipped back up from the prom to the town. If you look closely you will see a little old man hiding in the bushes! He was trying to not be in my photo even though I said I didn't mind waiting for him, or even having him in it! We laughed when I showed him the photo! His wife said he looked like a peeping Tom!  Once back in the town, we stopped at another award winning butchers and bought pies, steak and sausages!
Next was round the bay to Arnside. We had fish n chips ( sans chips ) from the yes you guessed it award winning chippy ( quite famous round these parts ) - although the batter was a bit greasy, we ambled up and down the prom and watched the world go by for a bit. It was a bit breezy! 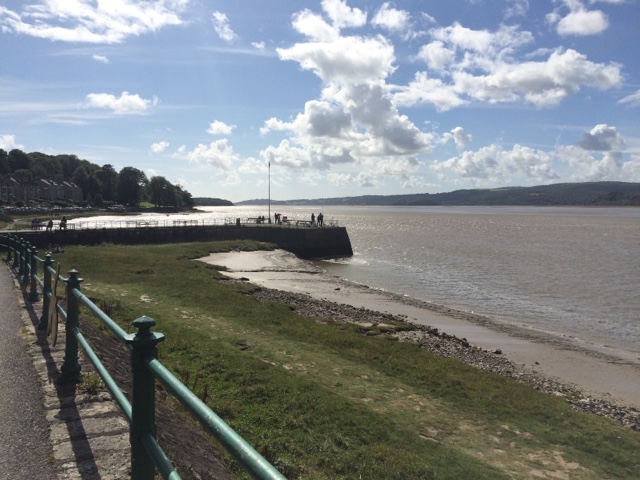 We sat on that jetty and then ate an award winning ice cream each! He had raspberry ripple, I had thunder and lightening!! 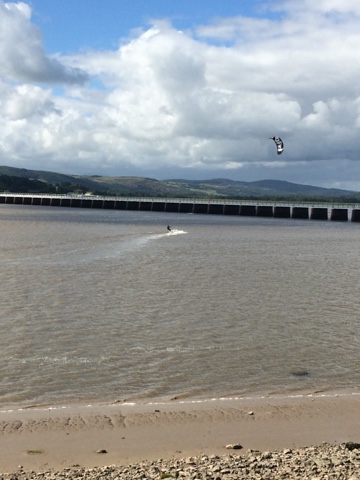 We then had a go at this....
Ok ok that was an OUTRAGEOUS LIE. We watched the power kite surfer dude for a bit. He was really zipping through the waves.
Then we meandered home! It was a really relaxing nice day out!
Now I'm off to clean the budgie out. Not a euphemism. Barry is going to stay with his other school mummy whilst I'm away! I'll miss him a lot! It'll be very quiet! I'll share our day out on Tuesday to Yorkshire, tomorrow!
Lots of love from
Rachel *got sciatica today OUCH* Radiostar xx
Posted by Rachel Flowers at 10:34