The recipes I've made today really couldn't be classified into my 'Manky Veg' series. There was still too much life and stiffness in them! They were a good 'week and a bit 'away from throwing out and therefore Manky.

I made a Vegetable and Bean stew from the Hairy Bikers .
An easy recipe using Auvergne, courgette,  ( of which i have LOTS thanks to generous allotment owning neighbours ) 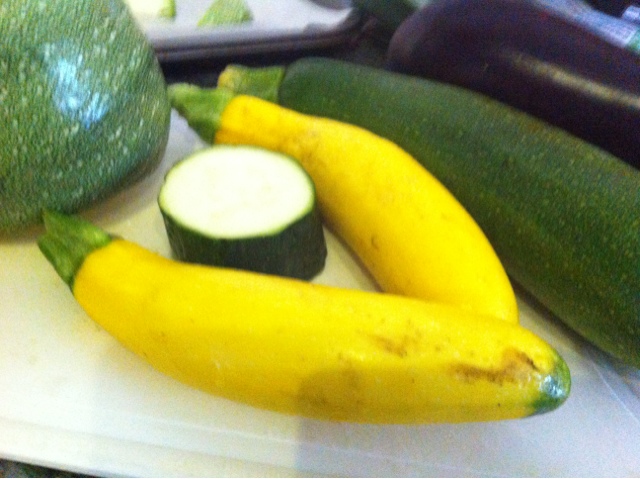 pepper, sweet potato, tinned tomatoes, tinned cannilini beans and paprika, chilli, coriander and thickened with a slake of corn flour. I've just to portion it up, some for the freezer as it makes LOADS!

At the same time, I roasted off a huge tray of :courgette, leek, tomato, banana shallot, carrot, yellow, red and green pepper, mushrooms and whole garlic cloves. They were all peeled and roughly chopped where applicable. And placed on the unwashed ( gasp) baking tray using the parchment ( it was like new ) from the ginger warning these can break your teeth biscuits. 10 squirts of that one cal sunflower spray. Sprinkling of salt, lemon pepper, parsley and black pepper and into a hot oven they went for ten minutes. I removed the tray and using the handy parchment
I could toss the veg with no mess! Next I turned the oven down 20 for twenty minutes. Then I turned the oven off and left them to cool in there on the tray.

I'll be honest here. I'd been over to Pam's blog http://agoodlifeintydd.blogspot.co.ukand liked her idea of Veg hash. But by now I'd made biscuits and the stew, I simply CNBA to do anything else! It's in a Tupperware box in the fridge till tomorrow!

Ideas for my delicious tumble of roast veg ( calorie counted to 221 for the lot ) include
Soup, filling for a pie or a quiche, blending together and freezing as the hash until the depths of  Winter or simply mixing with some mayo and salad cream and leaves and having as a delicious salad tomorrow lunchtime!

What would you do?