Well, I've done some ironing.
Made a start on a pile of mending and altering. Including a lovely frock that is for going to my nephew's wedding in.
I've started a new knit. Not sure if I like it yet ... I've some super soft fluffy wool that I've knit as the borders and teamed it with pale purple for the main. I had a chunky white planned, but in the light of day the whites don't match. It's just a little cardigan for a baby girl. I have a few friends with babies on the horizon and after my last project, I fancy something that will be finished sooner. If I like it I will show you, if I don't like it I will show you....before pulling it back.
I've pottered about in the kitchen. First Aid box sorted out and the garden is beckoning now! It's stopped raining and the sun is out!
Later , I'm going to make some cheese and spinach filo rolls for a picnic with one of my favouritest old chums tomorrow. Not seen her in ages so it'll be a fabulous gossipy day. This girl is THE funniest, wittiest person on my planet!
I love days like this. Over to you....what have you done today?
Ps.
Actually have already pulled it back!! Starting with the white. Btw fluffy wool is a NIGHTMARE to cast on and a knit - mare to pick up stitches!! 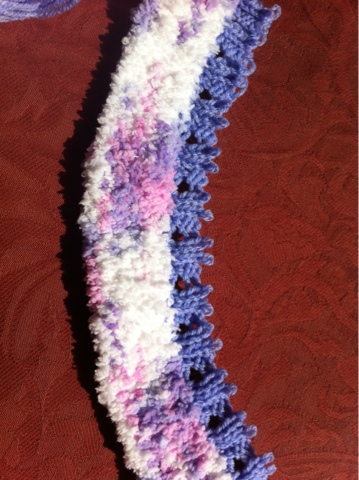