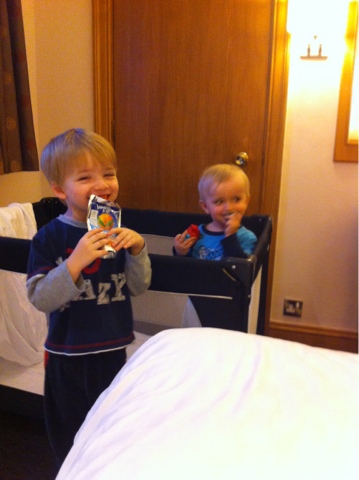 at the crack o'dawn. ( Both Lisa and I both declined the photo opportunity!)
Technically I'm pretty sure it's before the crack o'dawn, because its still dark outside! I finally fell asleep last night at around 3am. It was 3.13am when I woke up. I should say when I was woken up by the loud mouthed drunks staggering home via the amazingly acoustic empty multi story car park across. I shut the window. Blissful silence. I then had to put  the blanket off my bed over Lisa's charging kindle because that red charging light was burning into my soul. I was trying hard to not remember the  print of the vicious, wild animal staring down at me, eyes that follow you round the room, on the wall above the bed. 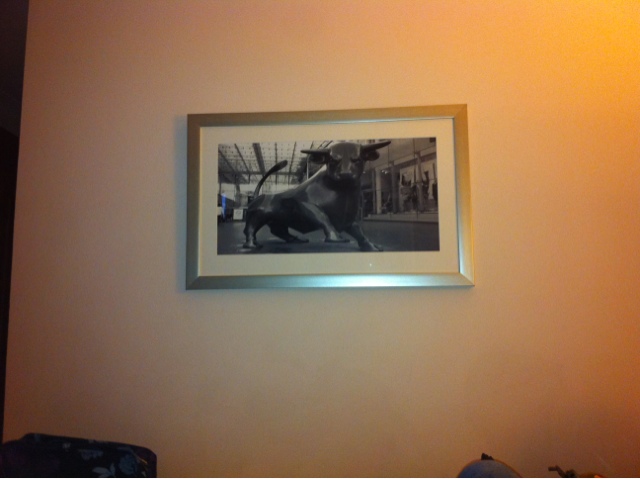 Then I reckon to have fallen asleep finally about two minutes before Harry started his own Dawn Chorus. We had the full alphabet song, various other tunes and lots of " I want to git out of my cot".  William got up then, so we gave in and joined in with the waking up ness! So am blogging on the bed, with a nice cup of tea, watching CBeebies against my will! Lisa reports a crap night's sleep too!
After our long journey on the M6 yesterday in the portable greenhouse, we dumped the stuff in the hotel room and wandered into the city centre. The boys were treated to fries from a certain global fast food establishment, and the grown ups went to M&S!
Harry and William had a splish splash in the bath when we got back and got their pjs. CBeebies went off at 7pm. Both boys sang the goodnight song beautifully then promptly ignored it! Eventually they both fell asleep. We tried to watch Dragon's Den. But the only channel not to work on the whole tv was BBC2!
We watched Law and Order, Lisa didn't last till the end; missing the not guilty verdict , then lights out!!
I suspect the real reason for our bad night was not due to our mini city break, but because of the reason we are here. In just over an hour we have to be on the ward at 8am, for Harry to have his latest EUA. So the specialist in the absolutely brilliant Birmingham's Childrens Hospital can look into his eyes to see how the land lies bilaterally in the world of Retinoblastoma. It's 8 weeks since his last visit and we are hoping that there is still nothing to report. Fingers crossed everyone! I'm now off to get a wriggle on!
( During the latter part of this post, I nearly expired due to the stench wafting from Harry's nappy! Even William was complaining! Lisa reported it was at least a six wet wiper!! )
The alarm Lisa set last night just went off!! It's officially 6:30am!
Rachel x
Posted by Rachelradiostar at 06:34