First of all I'm just going to have a moan about the horrible, filthy dark mornings. It's 6.30am right now, and PITCH BLACK. It's been so mild that I've still not had to have the heating on yet...I feel it's a coming, it's  the first morning I've needed my dressing gown on. It sounds squally out there and it's my 8am start today so I can't stay snuggled down in my uber warm and comfy bed. Roll on the weekend! Roll on Half Term.  And even though I adore Autumn B the best it's the light mornings I crave. Roll on Spring!
I've just waved off the HG to work, with his butties I lovingly made using the leftover Roast Pork from yesterday's Roast Dinner. It was epic as it goes. The menfolk wanted to know when the other 20 dinner guests were arriving as I'd somewhat over catered! Because it was just us three ( Miss 21 is away right now ) my yorkshires came out the size of a small detached house! ( when we have guests they tend to be defiant little frisbees).
In other news , I thought I'd show you the finished frock that's now on its way to my friend's little girl. 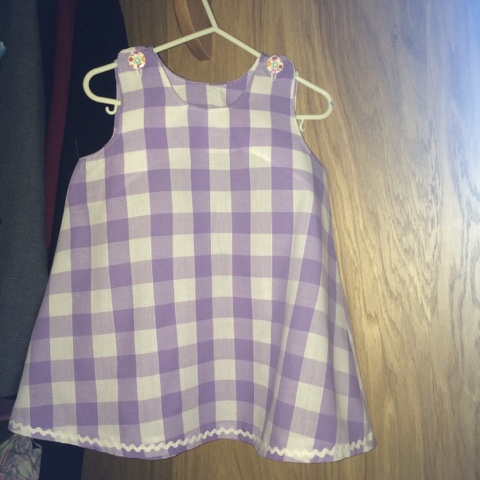 It's the first thing I've made completely from scratch since I did O'Level needlework back int Stone Ages.
The interfacing I used was a little too stiff for the fabric but it'll soften with washing. The material was given to me by a friend who'd started making a shift dress out of it, so I unpicked it all, washed and ironed it and got this wee frock out of it. There's some left to make a teddy too.
I've been knitting of late and now have an almost embarrassing amount of projects on the go! Nothing to show you yet!
Right, back to the title....
Little Woman.
If you read my last post you'll know we had a very late return to the hostel after the show - which I don't think I managed to praise highly enough!
The show was absolutely bloody brilliant. It was magical. The girl who played Matilda was on her debut show but she was seamless. The cast members were spot on. Miss Honey was just as I imagined when I read the book. The bloke playing Miss Trunchbull was PERFECT. There were some hilarious double entendres for the adults in the audience. Matilda's hideous parents were  gross in the best possible way. The stage tricks and scene changes were mesmerising and every single one of the 28 sat transfixed. They were wowed by it. None of them had ever seen a live show like that before. Sure, we have visiting theatre companies come to school where they cleverly put on a full panto with three actors, we take the whole school to the local theatres to see pantomimes at Christmas, but it's not the same. I think Matilda blew their minds. To hear them chattering about it on the way back was pure gold.
Anyway....
It was really dark and busy when we came out of the Cambridge Theatre. It was late Friday night in London. All of the other theatres were emptying too. We saw lots of people out on a night out and we quickly marched our crocodile line back to the tube. As was the case every time, we had one big bundle of tickets and we waited at the larger gates for a Tube worker to open for us. It was here that I was 'spotted'.
Yes, spotted. You lot don't realise how famous I am! You are about to find out!!
Picture the scene;
Late night Leicester Square, 4 knackered adults, 28 highly charged post Matilda cherubs. I was at the front with my 7 super close to me. Waiting to go through the gates were three blokes. I say blokes, they were HUGE. Each well over 6ft. They were in suits.
They looked foreign
As I scanned the station for the guard, I became aware of one of them gesticulating in my general direction, hand flapping, excitedly shouting
"Little woman! Little Woman! In that
Omg I know who that is but I can't remember her name type of voice.
Now I ( 5ft 7 in my head ) looked behind me as if to see who on earth this man was pointing at and trying to get his friends to notice. I turned back to look at him
"Little Woman!"
Before I had chance to be all affronted, (you heightist pig was crossing my
Mind ) one of his friends shouted with a big grin of recognition on his face
Ahhhhh DAWN FRENCH IT'S DAWN FRENCH!!!
Now I, am used to this Dawn French thing - it's been said a lot -but not for a while since she's gone all skinny!!
So I did what anyone else would have done.
I
Totally
Owned it!
I put on my best Dawn French grin, nodded my head in acknowledgment and winked at them!
They were beyond themselves! Fortunately at the same time, the guard had opened the gates and we were through and away before they could do anything else!!
I don't know what made me and my friends laugh so much - the fact that I'd ( all just about 5ft of me ) turned round to see which little woman they were referring to or the fact that they though Dawn French would be on the tube station surrounded by kids in high Vis jackets!! The kids, who were totally unaware this was happening! I don't think they'd know who she is!!
Hilarious!! Maybe they thought she was filming a new sitcom!!
So I must now go get some breakfast - it's definitely a porridge kinda morning. And I will tell you about our last day in London next time.
Lots of love from
Rachel *Dawn French* Radiostar xxx
Posted by Rachel Flowers at 06:57