Hello lovely folks!
Loving all the comments.
It's almost like having lots of penpals I think! I loved having a penpal. Mine was called Nick and he lived in America and we sent letters back and forth for years! I think I was in Junior 3 and we took home a little paper form to fill in with our likes and dislikes etc and then it was sent off and you were matched up with someone from the other side of the world. He found me on Facebook a zillion years later! Still friends now. He said he used to love getting my whopper  crazy letters!  I used to write some rubbish! Aww happy days!
I digress ( as per )
So after pulling back those 24 rows of the lacy matinee jacket I started again. Everyone in the lounge was warned. I concentrated a row at a time.
I was saying the instructions under my breath
Eg
Knit 8, yarn forward ,skippow ( which is what I say for SKPO - ( slip 1 knit 1 pass slipped stitch over for non knitters! ) purl 1 yarn forward yarn forward knit 18 one two three etcetc
If anyone came near I'd simply count louder whilst shaking my head, thus indicating they had to. Back. The. Heck. Off. Or. Else!  Things were tense!
After each row, I'd tentatively count the stitches and mentally high five myself because they matched what it said on the pattern!
Anyway! I'm happy to report that I think I've cracked it! This is knit sideways and then the yoke will be added separately. I've never knit sideways before! ( I'm now laughing at my own jokes - picturing me knitting with my arms at one side! )
But here you go..
Before... 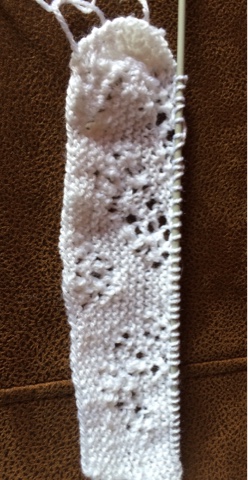 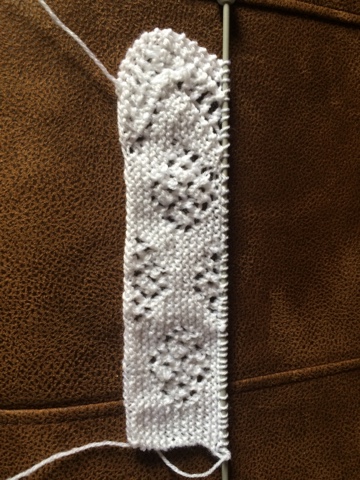