Well, as I am sure a few of you know, things in this house have not been going tickety boo dishwasherwise.To those of you in the dark - I am going to vent explain. 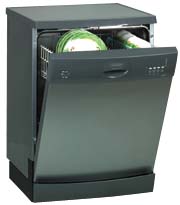 I have had my Hotpoint dishwasher a good few years past it's official guarantee . It was working fine, until one day I noticed that the pots were not quite clean. Now my first instinct, was to blame poor Mr Radio because ten times out of ten it IS his fault.  ( Whatever is it. )
We are guilty of having dishwasher stacking arguments, because he does not do it properly.

However, I re stacked and set it going again - but I noticed the water was not getting hot. So I ( I have blogged about this before.....Whinge about dishwashers is mid paragraph on this post from January 2011  ) then naturally did nothing about it for a very long time! See the post link!

In a nutshell, I rang Hotpoint who said I could either pay a one off fee of over a hundred quid and have it fixed, or sign up to a 12 month contract for a small amount each month. This does in fact work out more than the one off fee - but it IS only a small amount each month, my whole dishwasher will be covered and if it breaks  they will replace it with a new one. SO I signed up -


only to have my beloved come home and say lets get a new one! But the boiler is living on borrowed time - so we figured we'd save our pennies for then.

SO A really nice chap arrived on Monday , just after the really nice Gasman left ( I bet the neighbours were talking!!)  - he asked me what was wrong with it.
I explained that it works, each program runs all the way through - but the water does not get hot. He was chuckling as I explained how I was an expert at googling stuff and getting my dad in to fix things - but we were all stumped with this machine and how to get into it!
I made him a cup of tea. He ordered the parts, showed me how to get into the machine. Asked if he could look under my washing machine as he was desperate to get his hands on a Direct Drive!  And left. All jolly lovely, hearts and flowers, unicorns and rainbows.

The engineer would be here between 11am and 1pm.

THEY arrived at 12noon in a cloud of cigarette smoke. They stank of stale fags. SO that immediately got my back up. Good first impression? Nope. The way he swaggered straight into my house with this other bloke traipsing behind him? Good second impression? Not bloody likely. Did he introduce himself and his mate? Three strikes - they were nearly out!

I followed them into the kitchen and was answering his "What's up with it?" as he cut me off, switched his Ipod on and said I gotta have music to work! The ONLY thing that saved him here was that it was Brandon Flowers he had playing.
Unbeknownst ( Bloody hell I love that word) to me, Engineer Organ Grinder had already whinged,
" O I bet its the dishwasher I hate doing them!" to Mr Radio

Trainee engineer Monkey sheepishly bleated "O hello - I am just learning how to do these. He was pleasant enough, but was not wearing company clothes, which I found a bit odd.

He was wearing clothes I hasten to add, because dear reader - that would have been very odd! He just had on scruffy jeans and a jumper.

Then I was informed that my machine was in fact Bosch. Was I supposed to be impressed?

Organ grinder then set to work - explaining bits and bobs to his monkey. He sent Monkey out to the van to get some parts. He asked me to use my bathroom - which for some reason I wanted to refuse but said yes. Where had my backbone gone??? 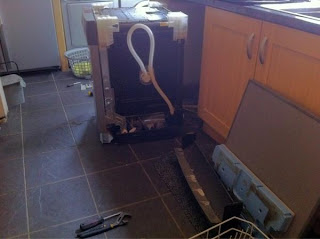 I felt really uncomfortable around them, but being British, I didn't like to say anything! I made them a coffee - he asked me if I had caffeinated when I'd said it's decaff! Er no - you are really starting to get on my tits boy. ( Yet still I said nothing!! )

After a while I left them to it and went upstairs to get ready to go out once they'd finished. Whilst upstairs I heard the door - looked out to see them at the van. I assumed they were getting more parts or tidying up.

I came back downstairs and said to my beloved Oh, have they finished ?- fully expecting them to come back to me, to tell me what they'd done and to show me that it was fixed and working! Imagine my surprise when I was told they'd  just walked straight out of my house and when asked, Mr Radio was told O your receipt is on the side. I was frankly affronted!!!

Manners dictate you say goodbye to someone before you leave their house. The Supply of Goods and Services Act 1982 says "carry out the service with reasonable care and skill" well judging from the banging and crashing that was coming from my kitchen and the fact they asked me for MY large bath towel and mops to clean up the water covers the reasonable care bit and the FLAMING OBVIOUS POINT OF NOW THE MACHINE DOES NOT WORK AT ALL covers the skill bit!!

When I went back into the kitchen, they'd helped themselves to MY tea towels and left them soaking wet in the sink - there was water everywhere, the dishwasher rack was on the floor and they'd stuffed their rubbish in MY bin! Now I know this sounds really pathetic and petty - but as Mr Radio pointed out - when he goes to work in people's homes he does not ask them to put their own dust sheets down, he has to clean up and leave the home in the same state ( and a lot of the times ) a darn site cleaner than it was and remove all rubbish. Had they asked me if I could dispose of the rubbish, I would have obliged and recycled all the different stuff, but they had just SHOVED it into my bin.

It was at this point I was strongly suspecting I had been secretly filmed for the BBC programme Rogue Traders. I was sincerely hoping not because my hair was a right state. I checked the street. No I could not see Matt Alwright badly disguised , hiding in my neighbour's hedge.

I can feel my dander getting up now!  Back to the story ....

I decided I would load up the dishwasher and set it going once I got back from town and off we went.

I was giddy at the thought of gleaming glasses and cutlery. I put new rinse aid and salt in and thought I would just run it on a quick wash empty. I pressed the machine on. red lights came on. red lights is good - they are supposed to be red. I pressed the button for the quick wash, stood back, held my breath and looked forward to placing my hand on the machine in ten minutes and feeling HEAT. But. nothing. Nada, nil, zero, do not pass go, do not collect £200, do not collect clean plates because NOTHING HAPPENED. I stood.Incredulous.

It was ok, I wasn't hyperventilating yet. I had my manual.  I turned to Trouble shooting. I looked up -
Problems - When the appliance is switched on Appliance does not start up.
-Fault with fuse in plug? Nope.
-Plug not inserted into plug socket?  ( I bloody checked - even though the big clue that there was electricity running through the machine was the RED LIGHTS) - nope
-Appliance door not closed properly? Yep it was closed. I opened and closed it about ten times to check. It was closed .
-Water tap not turned on? - It was turned on.
-Blocked strainer in water intake hose? Nothing was blocked.
-The strainer is situated in the supply hose connection - ummm don't think so
-Ensure fill hose is not kinked. - Nothing was kinky in MY kitchen!

Looked at the receipt they had left. According to my data they had replaced the heater unit and the module unit.

I rang the help line. It was CLOSED. So I ranted and raared and was generally pissed off about it all night!

This morning, I was calm and collected. It wasn't the customer service team's fault. So when I got through ( no waiting on hold for ten hours listening to muzak - that may have just tipped me over the edge ) I explained that I now had a none working dishwasher and I would like to give them feedback on the service I had received.
The lady was very nice. She apologised and said I could have my original nice man engineer but not till next Friday. I said that was fine. She did offer me the engineer who came on Friday...but accepted that may just be a tad awkward! She made a note of my concerns and asked me to file an official complaint on Tuesday when the relevant people would be back at work. She also made a note on my file that Organ Grinder ( she was not sure who the monkey was ) would NEVER EVER darken my doorstep again! And probably no other doorstep in the land if that was how they  behaved.

Now I am not an unreasonable ogre. Had the bloke said to me, look |I have replaced the parts but now it's not working at all, however I have another appointment to get to, please ring to arrange another call out - I would have been narked but not enraged. But the fact he hot footed it away SMACKS OF GUILT. He should have handed my receipt to me in my hand, pointed out details on it to me and SHOWN ME THAT HE HAD FIXED MY MACHINE!!!

Come on I am ready for you all to outpour your service engineer angst. Please tell me all your appliance rage stories. It's over to you!
Posted by Rachel Flowers at 11:11