I decided to go through some old posts, combine them and repost them.

Well, my new nephew finally arrived with his Hanty Rachel waiting to gently guide him into the world then cut his cord.

So Lisa was packed off to the maternity ward for close monitoring. After a while, the FEMALE ( This is important for later on in the story) consultant said she was concerned about a few decelerations on the trace and as soon as there was a bed ready on delivery Lisa, who was 3 cm and soft, would be put on a hormone drip to move things along.

After work I went up to the hospital with to see what was happening. Poor Lisa was STILL attached to the trace monitor - so for the whole visiting time ( Me, D, Ma & Pa ) our eyes were glued to the digital numbers and graph paper. We didn't speak to Lisa at all. I was expanding my medical training.

10pm that night. Midwife came to say MALE consultant wasn't alarmed with the trace, it seemed OK now. As there were a million other inconsiderate woman birthing downstairs Lisa could jolly well wait! So
D and I went home for a good nights sleep though we we only too acutely aware that being baby number 4 this could happen at ANYTIME.
First thing Saturday morning.

We drove up to wait till I was allowed in at 9am. Lisa had texted to say she'd been up most of the night with pains and her waters had gone about 6am.
What followed was a day of laughter and hilarity! 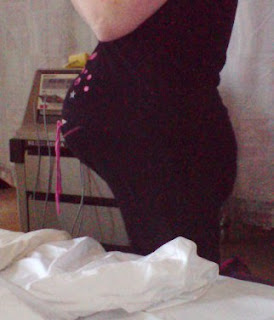 Come on out little baby!

We chatted, did crosswords, drank tea then decided to go for a wander to the cafe to try and help things along. Lisa said walking sideways up and down stairs was good for opening the pelvis. They didn't have this in the 90s when my children were born! Oh the advances of technology.
I walked sideways up and down ALL the stairs to no avail - nothing happened!!! Well apart from nearly tripping over my long floaty skirt which now, having lost a bit of weight, trails on the floor - so I mainly walk around like a Victorian lady now holding up my skirts. Lisa did say I should have a crinoline. I am seriously considering. I was BORN to be Victorian.

We were at the top of one set of stairs ( very stairy is our hospital) and I asked Lisa if she had ever given herself a self Brazilian . We were discussing surfboards. Our pet name for sanitary pads - the hospital ones Lisa was using to try and contain the flood of waters she was leaking were HUUUUUUGE.
Please note there are no fullstops in the next paragraph. This is intentional.

Back to the DIYBrazilian....ladies - have you ever been in one of those ( deep breath)

OOOH dear I should have had a wee 4 hours ago when I was at work, instead I held on till now and oh bugger, where's my bloody keys, check coat pockets, rummage desperately in handbag, tip handbag upside down, find keys and bring them up into the light triumphant, like Golum and his ring, grasp keys hurriedly, stuff everything back in bag, sit on garden wall and compose yourself for a second, oh need a wee need a wee, fumble with keys, can't get the key in door, cross legs bend knees squint eyes, clench pelvics, oh for crying out loud key get in the effin lock, dance dance jiggle dance, nearly break key trying to wrench it out and slam door behind you, much swearing, re open door and pull coat out of way, shut door again, cross legs run sideways past all the crap in the hall ( windows, doors, skirting boards, radiators, corrugated steel - all DIY projects in the waiting , run up stairs like Linford Christie ripping your coat of and swearing as your arms get stuck, pausing to dance riverdance routine on landing with legs triple wound round each, other pelvics clamped as tight as they can whilst singing now ooo come on come on ooooo, you then shuffle legs twisted feet together into the bathroom desperately having to yank down undergarments ( I would say knickers but the Victorian in me refuses it ) so fast to avoid accident - only to remember milliseconds too late that a
a) wretched unwanted relative aka in my house as aunty from america here, therefore
b) super duper, absorbent .freshness included, cotton soft,, feels like velvet ultra with wide ( super glue non slip non moving)WINGS ensuring they stay in place ,even in all those , tennis matches we play, horse riding, parachuting, jogging, disco dancing activities we do in skin tight white trousers( Whhhooooooooooooooooooooooooooaaaaaaaaaaaaa bodyforrrrr mmmmmm) that we do at these times of the month  pads is in situ
c) Lady garden extremely unruly and one of those must do jobs but never cba

Well Lisa and I laughed and laughed and laughed. We were almost crying. The more she laughed so did I . She was contracting. I wasn't helping. The couple on the stairs were looking alarmed and got the hell off that stairwell as fast as they could!!! I think they thought she was having a baby!!!

We made it back to the ward and were finally told we could go to delivery. We were signed in and Lisa finally conceded that she needed gas and air. We just chatted and laughed the day away. I locked myself into the toilet much to the mirth of midwives and Lisa. She bounced on a birthing ball. I had a go, nearly rolling off  it.

As Lisa decided she needed the toilet ,the midwife agreed it would be a good place to open up "that little bit of pelvis".
Lisa PLUS  a BIG gas n air canister PLUS Drip and drip holder PLUS midwife PLUS me on plastic chair squished into that tiny bathroom.  She endured toilet contractions like a trooper - a swearing trooper,  to open up that last little bit of pelvic area ( doesn't sound painful when typing it) but from the cries and tears and the vice like grip on my hand I think it was a little bit hurty.
Lisa went into transition at 8.02pm. We were still in the bathroom at 8.02pm. We ( the midwife and I were giving ourselves bloody hell this baby is going to be born down the toilet look ) made a  "dash" back to the  bed as  her contractions were just crescendoing one after an other. WE moved as one, me, Lisa, Midwife, gas canister, drip trolley, and we had a  clamber onto the  the bed. When I say clamber, it was a heave and a shove . There was  much weeping and "Give me an epidural" and "I can't do it",and "I'm not doing it" and "I'm going home now" and "I can't do it" and "Get me a doctor and let them get it out" and "Just get it out " ( pauses whining to knock concerned sister's hand out the way from mopping fevered brow) and "It hurts and I'm tired" all from Lisa - with the tennis match being counter struck with Midwife Mutterings. " Lisa, it's too late for epidural." " Lisa you are doing so well." Lisa it won't be long." Lisa keep upright." Also Midwife Rachel mutterings. " Lisa quit using your time between contractions to REST". " Lisa, you are NOT having an epidural. " Lisa you can do it." " Lisa you WILL do it." " That's it....BREEEEATHE" In the meantime Midwife Rachel was trying to hold her precious labouring sister ON THE BED as Lisa was intent on getting off  and going home!She was, she was going home, she was trying to rip out her drip cannulas, shift the midwife out of the way because she was NOT STAYYYINNNGGGGG.

In the pain and nightmare of transition she was truly  completely out of all conscious thought. She was moving around like a ( sorry Lisa but it's true) wounded bull elephant. The two lovely midwives were opening packets and filling out paperwork - I was relaying this - " Lisa they are getting the pack ready - it won't be long you are doing really well keep going not much longer etc etc etc. Then she declared she was too tired to go on I said I WILL RING MUM. she got up on her haunches, leaned her head into the bed and PUUUUUUUUUUUUSHED and I could see the head. " "LisaIcanseetheheadIcanseetheheadwelldoneIcanseethehead. " Midwife was saying listen to your body you can do it. She squeeeeeeeeeeeeeeeeeeeeeeeeeeezed and out came this perfect little head.
We waited for next contraction and Harry was delivered all safely and perfectly at 8.06pm. I declared " It's a boy" I think we all breathed a sigh of relief.
TIME TAKEN FOR ALL OF THE ABOVE FROM BATHROOM DASH -( I do use that word completely tongue in cheek - we were tripping over the drip, the gas and air and the midwife and I were doing that communicating with our eyes as to not alarm Lisa as in SHIT SHE IS READY!!!!! - TO BIRTH - FOUR MINUTES!!!!

Phew - it only seems like a moment ago. I think it was more painful and frantic than the birth of his older by 14months old brother William. :)  When her waters broke spectacularly and she hit the wall across the room! The midwife did make a point of saying see you next year girls, Lisa said NO WAY!
How mean of her to deny my further hands on learning Midwife career. 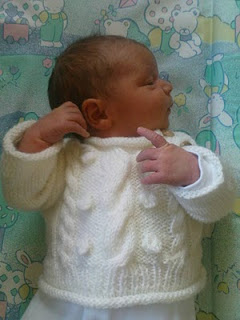 Little did we know what would be in store for our little treasure x
Posted by Rachel Flowers at 10:59