The return of the SNB’s.

The SNB’s are what me and my friends call the Sunday Night Blues - my lovely long first time ever in my 26 year career two week half term is at an end and my days will be full on, unpredictable and possible fraught with danger for the foreseeable!

The planned building works ( the reason for the two week break ) is OF COURSE not finished meaning three toilets and sinks to serve 60 infants. It’s going to be interesting!

And the knowledge that also we have to payback the extra days off as twillighty insets burns!  Always a bloody yang to the ying!

Today we went to see my Ma in law who was diagnosed with mixed dementia at the start of covid.

I cut her toenails and we laughed as they pinged everywhere!! Then I hoovered the offending pingings up and prepared her hot lunch. We sat and chatted first. Today she looked older than she normally does but was with it mostly and conversant. She asked for some of the old photos down off the unit and spent a while looking at them and naming people in them saying that my HG looks like her Grandad. I did her little bit of washing to save my Sister in law a job. She is doing all the main caring during the week. We do have carers in place morning and evening to give medication. The HG calls in most days after work and I go at a weekend.  She had all the aids available to assist with independent living and is about 50 years back when she has a confused episode. We are grateful for the time of year as she hates dark nights so is less inclined to go a wandering. Also the children on the cul de sac are not playing out drawing her attention. Her ‘thing’ is she’s worried she’s lost the children and goes looking for them. At first it was our children but the last time it was the HG and my Sis in law.

It’s such a shame to see her like this. She’s 80 in January and has aged about thirty years in less than a decade if you get what I mean. She has always been young at heart and full of life. She used to come see us every week, and run home ‘beating the bus’ - she lives a good 45 minute fast walk away!

I’ve written about her illnesses before. It all started when she was admitted to a and e with AF - her heart rate was up at 175.  Anyway she had a heart valve replacement - we learnt that she’s one of the last people to have the reason for this being a side effect of a childhood bout of St Vitus Dance and rheumatoid fever - not long after she had it- the antibiotics weee created to combat it. When she was in hospital they made a pint of showing her case to student doctors because as her generation is leaving this world, cases are getting rarer to find. So because of this heart condition her dementia is vascular and she also has Alzheimer’s but I just found out they call it mixed dementia.

Getting older is a bit pants really.

So this week I’ve faffed about a lot. Walked the dog in the rain a lot, bathed her a lot. I e caught up on some Walking Dead programmes. I’m addicted! I’m 3/4 way through The three of us by Ruth Jones and I’m thoroughly enjoying it.

I have just started a little knit to pop away in my ‘if I ever have grandchildren’ stash. This is because I’ve knit for so many other people’s babies and given loads and loads away ( and loved doing it ) but I feel bad now I’ve not done it for my own children and there may come a day I can’t do it. This wool is some I had leftover from another blogger and it knots up lovely. This is the first time I've done this pattern. Only took me a day to do the back. I plan on doing a little crafting every night after tea. I’ve another re using sewing project on the go. 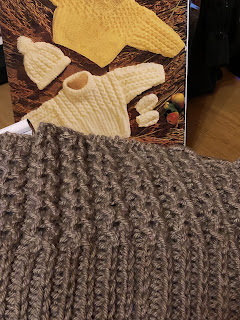 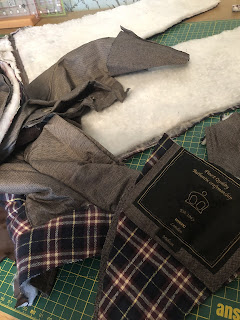 Well I best get thinking about going to bed soon, as every single day without fail in the holidays, I’ve been awake and ready to get up at 5am.  Tomorrow morning I’ll be hard and fast asleep. You watch.