Bluebell is still suffering from jet lag re British Summertime so when she needs her last week it was 6am wee, she doesn’t care that this week the clock says 5am. She takes after me. I’ve used my time wisely -sat wrapped in a blanket on the HG’s electric recliner with my feet up ‘just so’ and she’s resettled on the chair arm next to me, reading through the blogs I follow - I’ve been commenting and trying my best to comment but blogger keeps coming at me with error messages!

I do follow a lot of lovely people and one of them is Tracy who is a dear dear real life friend even though it’s been a few years since I saw her in the flesh and she’s just made me laugh my head off and recall a childhood memory that also makes me laugh!

“ I bought four tins recently that were reduced to just 69p each - two square, silver ones and two cylindrical ones in a red tartan pattern.  These are perfect for gifting homemade cookies, which I will bake just before gifting.  Just a note: one year I bought my brother a gift of a bottle of port and some Derbyshire stilton. I wrapped this up and gifted it a few days before Christmas, but forgot to tell him to put it in the fridge.  He put his gifts under the tree in his house...which was next to a radiator. He and his wife were trying to find the source of the stench.. and only found it on Christmas day when they unwrapped a stinking, moldy, melted mound of cheese... “

And it reminded me of when I was a very very unworldly wise naive little 11year old on my first ever trip abroad. We went to France ( St. Omer ) in the 1st year at Grammar School. It will have crippled my mum and dad to actually pay for this but they managed it and off we went. We stayed in a chateaux, the rumour was we’d eaten horse meat for supper. I recall being petrified that I’d catch malaria from the mosquitoes. We were allowed to go unaccomplished ha ha appropriate typo there, unaccompanied  into the town centre ( I know now that the teachers probably were sitting in a cafe watching us, eating croque monsieurs and drinking copious tasse de téa or un cafe au lait ).

And we set about practicing our French. I mean this was the early 80s when it was fine to let little girls go off introducing themselves to strangers and asking where the toilets/library/swimming pool were! I bet the residents of St. Omer would roll their eyes when they saw the coaches pull up year after year haha.

One of my friends bought 3 kilos of grapes. She needed to practice more I think. That was a massive bag of grapes - I think we got told off for having a grape fight in the dorm that night. ( I don’t ‘think’ at all, I know we did! ) We all bought watches on chains to go round our necks and my present to my mum to take home was from the hypermarché at Calais. We were eyes on stalks as we pulled up at Mammouth I think it was called. It had everything you could ever want! It was massive!

So being in France, I bought my Mum something very French. A Camembert. I put it in my hand luggage and off we set. In a hot coach. It was a hot hot summer. We lived in the North. That 5 day trip to France actually consisted of 2 days travel to get there and 2 days travel home again! By the time we were getting up towards Birmingham, the smell on the coach was RANK but none of us knew where it was coming from! Not even me, because I had no idea what Camembert was except it was French cheese. My mum loved cheese, we used to go get some from the market stall every week. I figured cheese was cheese. I am laughing now because it stank! And it was practically walking itself off the coach by the time we arrived back at school. At home I opened the bag to share out the gifts. The cheeeeese had leaked over EVERYTHING and the smell hahahaha.

So thank you Tracy for sparking that memory!

Yesterday, I went for a very lovely afternoon tea 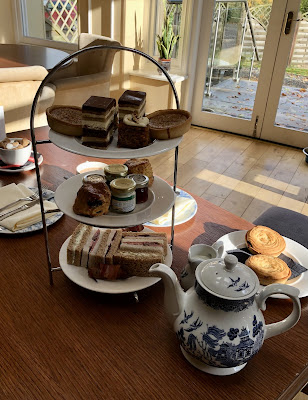 It was delicious. Much better than anything I’ve ever had elsewhere including the iconic Art Deco hotel I live near. It was their festive version. There was a pig in blanket each. The sandwiches were savoury egg and cress. Turkey and cranberry sauce, glazed maple ham and onion marmalade. Yummy. The scones were straight out of the oven ( a little over done but still delicious ) with clotted cream and jam. A piece of carrot and walnut cake, a treacle tart, a Viennese swirl topped mince pie and 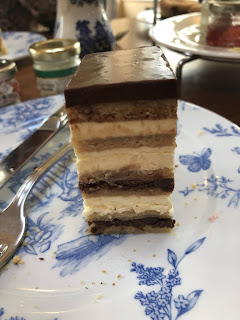 a layered chocolate orange mousse thingy which was divine. We had the place to ourselves and we were not rushed out like we were at the afore mentioned posh hotel. We were there for three hours in fact! As much tea as we could drink and it was perfect. It was where my friends had their wedding and the food was outstanding then. We are going back in December as my friend paid for us both so I will have to get the next one! Did you see what we did?

I could finally give my friend her birthday present. She absolutely loved it. She was touched and thrilled and was over the moon with it. So here it is! 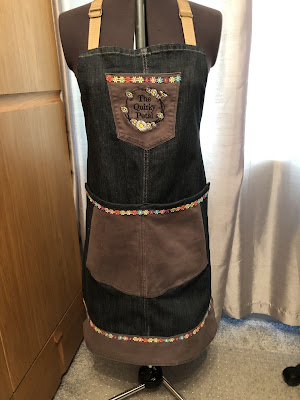 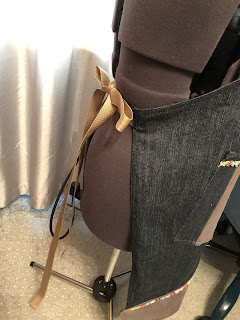 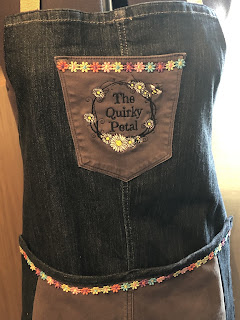 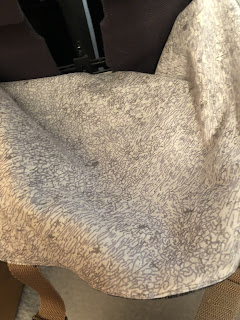 She has started up a business as a florist. And I’ve made her an apron to wear when she does Wedding Fairs and workshops. I made it from all used fabrics and designed it along the way, changing my mind here and there. It’s fully lined, with a deep two pocket pocket on the front. It’s made from two pairs of jeans and the only new things are the straps and slider adjusters.

She does have aprons that have her company name ( badly ) embroidered on - I’ve been aghast at the puckering that the professional embroidery company produced! So I made her something better in my opinion haha.

So today is Wednesday already. It was almost a frosty start and I think the rain has ceased so I may attempt a bit of garden tidying, especially in the front and will be glad of a none soggy dog walk.

I’m not sure why my font is different in parts. It all changed when I copied and pasted Tracy’s bit on.

Time for another brew. Have a lovely day.