Well as some of my readers concurred it was my error rather than the pattern ( see last post ) - here is my attempt number 2. However as it IS for a soft toy, this is the front - I shall do the back plain! Hopefully will be finished by weekend! 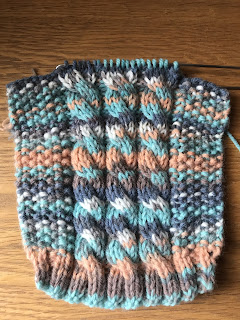 This 2nd week of the holidays is going so fast. Have you read Tracey’s blog post about things to do? Find it *here*

Some great ideas. I really enjoyed reading that post.

Yesterday we had an adventure*.

Today we took Bluebell to one of our favourite woods and she had a right old romp around getting filthy and then ended up in the river. As per she’s damaged her pads on her feet so after her warm shower in the car park, it was home ( via the posh cheese shop and supermarket for amazing cheese and artisan crackery ) for bathing, sudacrem and little socks on! We had delicious sausages for lunch, then I spent the afternoon in the sewing room with my top that I’m making. The HG spent is watching the telly through his eyelids before waking up and doing the hoovering and cleaning out the fireplace.

Speaking of the HG- just because he is the very very best, he ordered me some surprise presents *just because* and they arrived yesterday.

A lovely new jigsaw, a couple of new kits to make a squirrel and an otter, a pattern kit for a cagoul, a merchant and a new tape measure. I am so spoilt. I’ve got some freezer paper and am going to photo copy the patterns onto it for ease of cutting out. They are from Cool crafting. I’ve shown photos of things I’ve made from there before - my Luna Lapin, my Freddie Badger and some clothes for them! 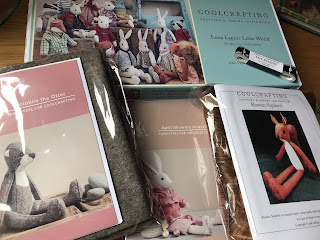 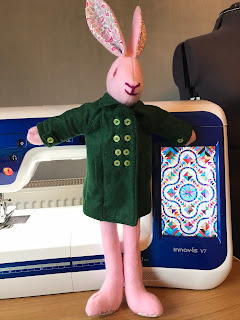 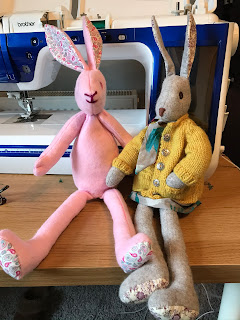 Anyway back to yesterday’s *absolute nightmare!

We loaded the car up ( dog paraphanalia) first thing. Dropped Mr 23 off at work at 8.45am and discovered that the underneath of the car was hanging off!!

I panic rang the mechanic who said we could come and show him ( we were only 5 minutes away ). He came, bent down and pulled off the exhaust! So we left the car with him as he said he could do it. And we were stranded at the wrong end of town! It was FREEZING but sunny. Anyway, we walked the dog to see my Dad, socially distanced outside n his shares garden of the sheltered flats he lives in. So that was nice- was about 10.30 when we left him. We walked to a field and let Bluebell have a run. We then slowly strolled up to my Father in law’s house ( where we’d only been the day before ! ), we walked across another field and by chance saw one of my old school friends and her dog. So I enjoyed a good batter with her and it really lifted the spirits. It also passed a little more time. We then got to the in laws and had a lovely catch up again with a couple of cups of tea. It was cold and I was starting to feel chilled a little so we illegally decamped into their conservatory- doors wide open - just slightly less Baltic. 2pm ish came the phone call. The car... - he paused and my heart sank as I was SURE he was going to say it couldn’t be fixed - he said the car is ready! Yay! So off we set again on the walk back to get the car. It was so lovely to be in it!!! We came straight home! We had walked over 5 miles !

TV - after seeing a programme being watched on Gogglebox ( one of my all time favourites to watch ) we found it on Sky One channel called The Flight Attendant. We are finding it compelling viewing! Not a scooby doo what’s going on but we watched 4 episodes back to back ( when we got back after our epic car adventure ). I’m also watching a three part documentary that I’ve had on the planner since 2019 about Lady Jane Grey who was Queen of England for 9 days. It’s fascinating me and I’m looking to do more study on it.

It’s the last day of the holidays tomorrow and I’m looking forward to going back and to getting back properly into the new Way Of Eating or WOE that I began 8th March. I’ve done a lot more scientific reading into it and it makes a lot of sense to me.

Anyway enjoy your Fridays everyone

I’ve much washing to do! So I’ll be doing that as we wait for the man who is coming to replace the damaged panel on the boiler ( just a cosmetic thing ) and it’ll only be gentle walks for Madam Sore Paws.