The day started cold and early and I started the first of three loads of washing - all was dried on the line too. Sunny and deceiving from indoors. We were waiting in for the Boiler engineer who was replacing a damaged side panel - purely cosmetic - and we had no big walkies planned as Bluebell had hurt her paws the day before. So I bleach cleaned the bathroom, hoovered the landings and the stairs. ( Landings - makes it sound like we have a West Wing! ) I also managed 3/4 of downstairs before the battery ran out on the cordless hoover I was using! I see it as a personal challenge to see how far I can hoover before it stops! The HG's back had 'gone' so he was in pain for most of the day and did a little bit of pottering about.

I spent a while sewing the top I am making and then was downstairs on a brew break, watching a bit of This Morning with Eammon and Ruth when it suddenly cut away and I said - I bet Prince Phillip has died.

And then came the announcement. I did feel a little bit choked up. I think it was Lucretia I think she's called on ITV news who looked emotional. If you know me well, you know I love the Royal Family and my immediate thoughts were for the Queen. Very sad for her indeed. Even though they are Royal, they are just people. She's lost the love of her life and whilst it seemed a little previous I thought - it was interesting to see photographs and hear anecdotes about the Prince's early life.

The HG and I both questioned why on earth the newsreader - I think it had changed to Mary Nightingale -  was questioning the Royal Correspondent Chris Ship on what they would be doing with the body, when the funeral would be and who would be the next Duke and on and on. We turned off the TV.  Later on, they were still dragging out people to chat about him - it felt a bit intrusive but it's human nature I guess to reminisce and share experiences when someone dies, famous or not and definitely so in this era of none stop TV.  And it is of course TV that has allowed us to learn so much about him, his wicked sense of humour and how much he loved swearing!

May he Rest In Peace.

Today I am going to mostly be doing the same as yesterday. Bluebell is definitely under house arrest and she went on a short walk yesterday and her paws began to bleed again. I'm going to look into getting some boots for her - I do worry about them coming off as she hares around at a million miles an hour. We would then spend ages trying to find them! The butcher is coming about 10am and I need to do an online shop. 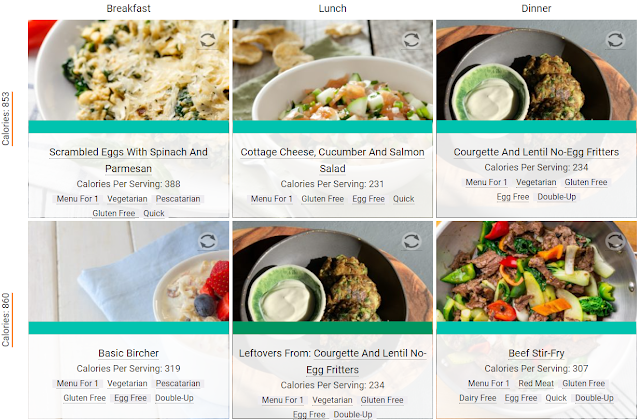 This is a snapshot of what the meal planner looks like for Monday Tuesday next week. I can click on the little circular arrows to switch the meals to suit my tastes. Or you can simply swap the protein - eg chicken for the salmon ( not a fan at all of salmon ) Then once the meals are set for the week, it generates a shopping list! So easy.

Must go - I am being squeaked at by Bluebell who is telling me it's way past breakfast time!

Have a good day all