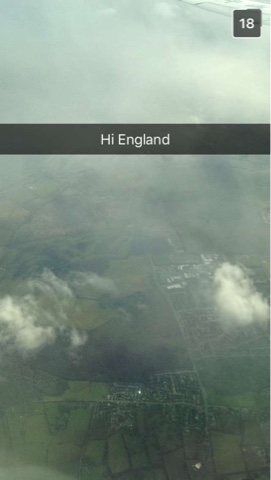 She's back!
Finally.
She travelled all the way from New Zealand to China then from China to Heathrow London. No bother.
London to Manchester - took about 6 hours due to xancelled/delayed/broken planes! So after making the requested homecoming meal of bangers,cheesy mash n beans for 8.30pm - her eta. She got in gone 11pm with me resembling one of the zombies on The Walking Dead. I've just finished Season 3. Season 4 looks good!
Anyway, in she strolled looking tanned but tired!
It was so lovely to clap eyes on her. The bet of five minutes from the other post went unwon! Tis all rather harmonious! We had a brief laugh and chat before everyone just went to bed!
Naturally I could not fall asleep despite being wholly knackered! I was just dropping off when the HG spoke and woke me. He complained he couldn't get to sleep! Within three minutes he was flipping well snoring!
Think it was about 1am when I dozed off.
3.33am woke for a wee
4.20am last time I looked at the clock
6am in a sweary mood when the alarm went off because of course I could now sleep for England!
It said on the news that Georhe Martin had died. I was all Game of Thrones bereft HOWEVER it was the bloke who wrote the Beatles songs.
Now Adele is singing. Her songs get right on my tits! I like her very much, she's hilarious on chat shows etc. No denying she can sing but for crying out loud it's all shouty angst ridden stuff! It all sounds the same!
Time for my shower and I think I need to use my *miracle mood improver shampoo!
Cheerio, I'll probably be back at some point with tales from NZ. Until then,
Lots of love from
Rachel *grouch face-heart happy* Radiostar
Xxx
*miracle mood improving shampoo does not exist. I might invent it, go on Dragon's Den and make my millions.
Posted by Rachel Flowers at 07:02