Desmond Decker cheered people up with his music; Desmond's,  the TV show about the barber shop in Peckham, cheered people up with its comedy; Desmond Lynam, the sports presenter has cheered housewives up for erm reasons unknown and Desmond Tutu cheered people's hearts all over the world with his peaceful messages.
Storm Desmond is none of the above. Nothing cheery about storm damage where one ( i.e. me ) discovers that one's roof isn't perhaps as watertight as it once was. Nothing cheery about the whole city where you live being flooded. Nothing cheery with being plunged into darkness on Saturday night about 10pm.
Mind you, I've got off lightly. The worst thing for me was having no electricity for days. And, gasp, no internet !
I'm all electric here. No land line, no mobile signal. Nothing. Effectively cut off from the world! No way of getting in touch with Miss 21 to check she was safe. All the roads were closed due to flooding so no way of getting around to check on other family. Hardly the hardships that people fleeing wars etc have to endure, but it's been an odd few days!
Apart from
DO NOT OPEN THE FREEZERS
stress it's been quite lovely! On Sunday morning, we set off to go see the river to discover everyone else had done the same. Even though you can't see them here! It was teeming with folks. 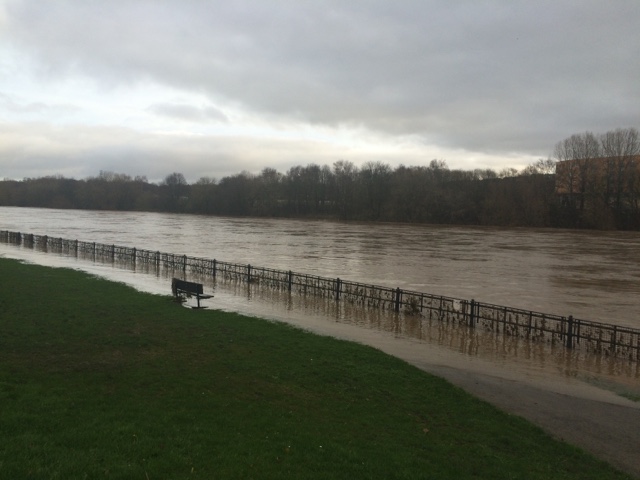 The water level had dropped dramatically here, the night before you could not see the grass and the river was over the top of the railings. 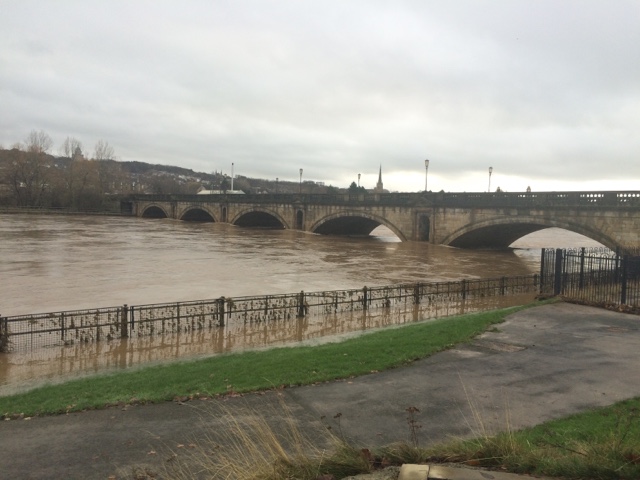 You can normally see the bottom feet of those arches and you can see the sludge left on the path. What this doesn't show is how fast it was still flowing. This bridge ( the main route into town ) had to be closed on the Saturday night until Monday afternoon.
Here's a shot of the bridge nicked off google that shows the water level at normal high tide 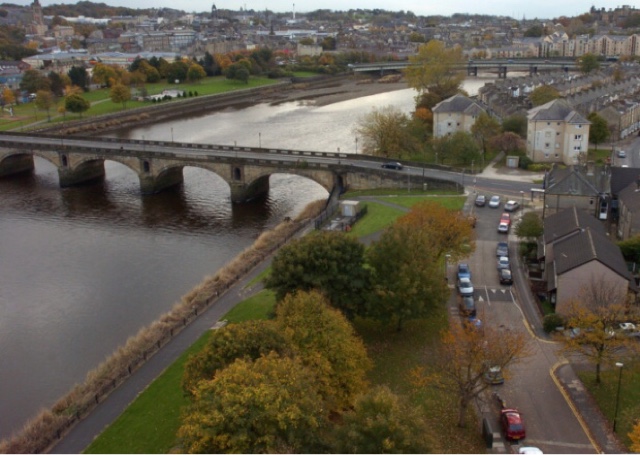 The water came right up to the trees over the grass.
People were talking to each other and I discovered that the young man who has lived in the flat across from me for five years, is called Phillip. I know where he works, I know where his mum lives etc!
So as my oven is all electric I was cooking on the camping stove! We had sausage and eggs on Sunday teatime, chicken curry and rice on Monday teatime and I made Mince n tatties last night. 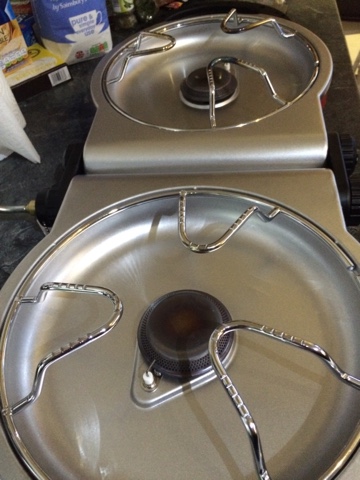 As I write ( on my mobile 3G) I have power but no internet. So I'm going to go bake a loaf of bread as the shops are stripped bare of basic provisions - although most routes are now clear, so deliveries can get through now.
It was UBER ambient in my lounge on these long dark evenings! We were so relaxed. I put it down to the deployment of ALL of my scented tealights, votives and candles!!
The photos don't do it justice how cosy it was. Luckily we stayed warm with our coal fire and it wasn't actually that cold outside. 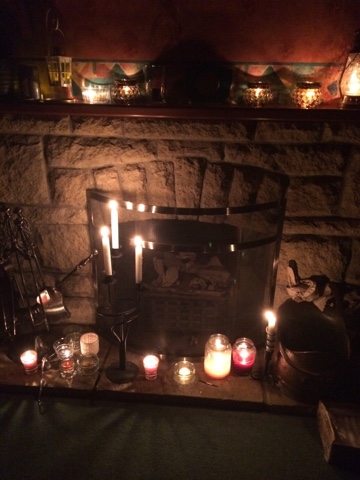 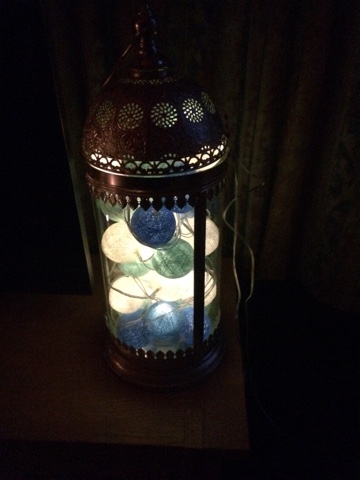 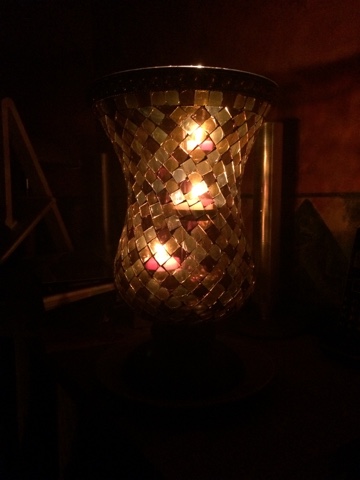 We all gathered together ( well, me, the HG and Mr 18 ) and chatted for hours. We reminisced about his childhood and I was quizzing him over such things as when he stopped believing in Father Christmas. We all went to bed before 9pm too! I didn't miss the TV at all. I did miss the convenience electricity gives you. But we managed.
I went into work on Monday ( school was shut to children ) to view the storm damage - the roof had blown off! Ok, a small part had collapsed and water had poured in. School was closed Tuesday and today. Mainly due to the unreliability of the power.
The weather forecast today isn't good after two relatively mild dry days. We've 12 hours of heavy rain and gale force winds to look forward to.
The devastation is widespread to the South Lakes and little villages just south of me. Businesses ruined. People's homes wrecked.
Some of it could have been avoided. I might dip my toe in to a little puddle of controversy here, but if you build homes on flood plains, people buy them, then complain when they get flooded. It ain't rocket science, low lying flat land next to a river is going to get flooded if said river bursts it's banks. Tut tut.
Fortunately I'm not on a flood plain. If I was ever flooded, then it'd have to had been a biblical event and the devastation would be a lot worse.
Thank you and hello to new commenters! I hope future posts are as engaging!! If not, read the blog backwards!  I'll be along a blog visiting and replying later on today. Now that the power is back I'm going to risk doing a wash! Hopefully I'll be back at work tomorrow. I know I might whinge about having to go, but I've toooooo much to do, I miss the kids- I cannot WAIT to hear them tell me their experiences of the floods and power cuts!
My tree is still not up but I did write some more Christmas Cards yesterday. I got my overseas ones posted and I might wrap the few bits I've managed to get so far, in front of a Christmas film this afternoon!
Did Storm Desmond get you??
That's all for now!
Lots of love from
Rachel *typing in electrical light* Radiostar xx
PS. This made me chuckle.someone had written about the Prime Minister arriving in the region. This photo was posted with the caption underneath!!! 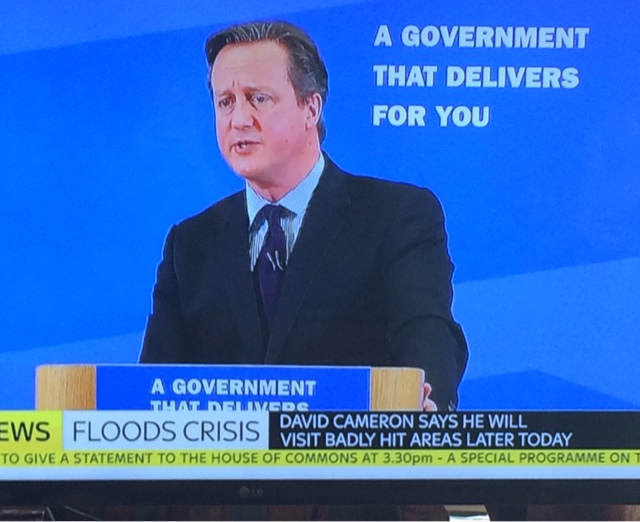 ARE WE NOT SUFFERING ENOUGH???
Posted by Rachel Flowers at 07:42