A day of nothing

At last!
I say nothing, however I've all the food I bought yesterday to deal with and put away. I'm going to put the decorations up and n the dining room and get my cards up etc
It's going to be a lazy day for me.
Yesterday, was the opposite ish.
The HG and I were out by 8.15am.
Off we went to a shopping village place to get the last of the gifts we wanted.
Whilst in M&S, I looked at a 'knit your own cushion cover' set in the half price sale. It contained four  big balls of the softest, creamiest, chunky Aran wool, a set of thick bamboo needles and a cable needle, 3 buttons and the thread to sew them on. Now £12.50. It was the last one.
No instructions. But I figured the wool alone was worth more than that so I looked it off the shelf and at the till asked the lady to double check there were no instructions. Nope there were none, so she knocked an extra 20% off for me! £10 billy bargain! I used a gift card I'd been given for my birthday last year so basically, it was free! Because you all know how desperate for wool I am......( please let's forget about my stash post in the summer) I'm going to email M&S later today to see if they can send me some instructions- though I think I'll use the wool for a jumper for my niece!
After we left the shops at 10.07 ( including a quick squizz round hobbycraft where I only bought some off those battery operated tealights ) we went to the posh garden centre. The cooked breakfasts are only £3.50 and frankly it would have been rude not to! 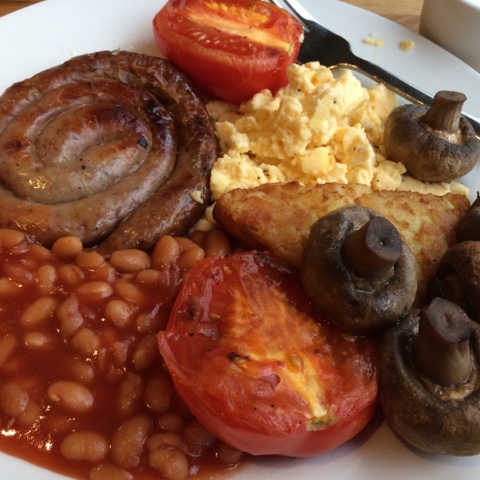 I swapped the HG's bacon for his tomato! This lot was washed down by a mug of tea. In the farm shop bit, we looked at the chicken livers,( for the HG's famous homemade pate ) the lambs liver,( for when I make the HG liver n onions for tea ) the pin wheel Cumberland sausage, ( sausage mash n beans one night )  the shin of beef, ( stew n dumplings )the garlic butter chicken ( kebabs ( served with rice for a really tasty treat ) and their sausage rolls. ( a must buy ).
Next port of call was Dewlays Cheesemakers. The kilo and a half of Lancashire Creamy mild should see us through til March I reckon! £8.20 is a lot cheaper than buying it from the supermarket around here!
After that was the farm shop for the sack of spuds and all the veg. ( I do mean All. The. Veg )
We then made our way to the beauty spa where I was going to have my eyebrows ripped off and he HG was going to have the back massage I bought him for his birthday! One of the above activities is definitely more relaxing than the other!
We'd arrived a bit early, so we parked up and had a wander up the High Street. Naturally, I went to have a look in the charity shops.
Now I'm not a shoe/bag/clothes person at all. For the most part, I don't really care what I look like with what I'm wearing. I find it incredibly unbelievable that people pay 100s and 1000s of pounds for shoes and bags etc.
However,
I was having a browse when I saw the most beautiful boots I've seen in a long time. They were JUST like the ones I used to wear in my teenage years - except these were satiny and those were suedey! They were in my size! I worried over the heel being a bit high but I had to have them!
I chatted with the lady at the till who genuinely offered to buy the boots back off me for herself if the didn't fit!
My photos do not do them justice! 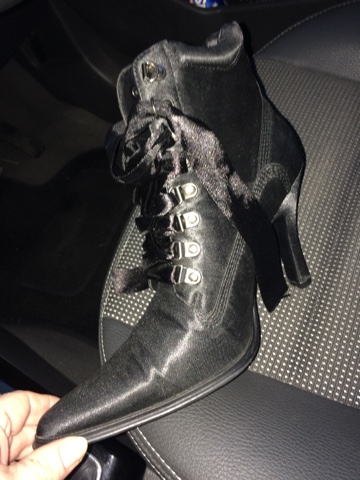 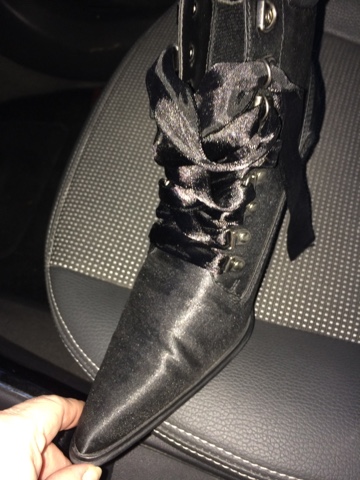 They actually fit perfectly though walking in them is an issue!! I need to repractise walking in heels! Failing that, I'll put them in my china cabinet!
Once we'd been in the salon
Me - ARRRRRGH
HG- ahhhhh
It was off to the seaside to get his Christmas Present from me. A full waterproof fishing outfit. We then came home with a couple of stops at shops on the way back!
We got in at 4pm. I was going out for 7pm and I had to dye my hair! To be honest, after my shower I could have just got my clean pjs on and climbed into bed. Sooo tired. The week had definitely caught up with me! But the meal had been paid for ( out of my lottery winnings ) so I was jolly well going!
The table arrangements were not great with some of us say with our backs to each other. However after the disappointing starter ( where only half came ), the mains were gorgeous. 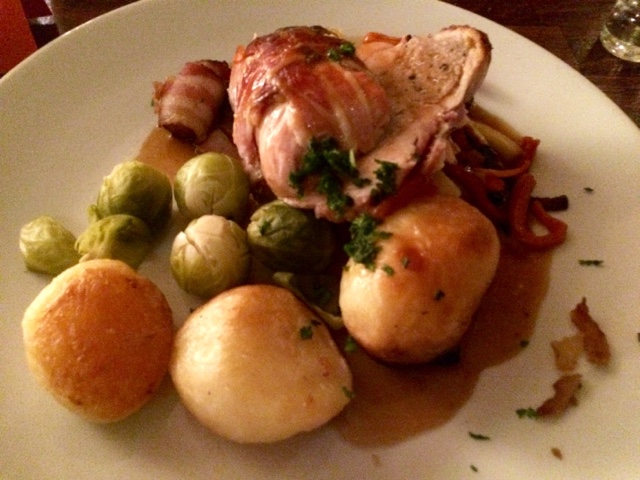 Yum! I couldn't finish it all!
The pudding was um well my crime brûlée didn't crack when I hit it on the top and it was a bit like set semolina in texture! ( I've been watching too much Masterchef ) 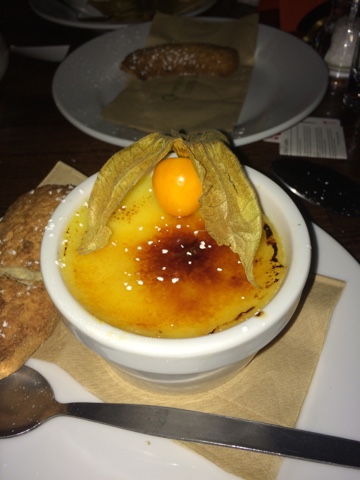 I didn't really eat it! I had a good laugh with the people sat on our bit of the table but by nine o'clock I was ready for home! There was a disco but how the rooms were set, it was unclear where one had to go to dance! We'd been upstairs on like a mezzanine layer away from everyone else!!
Me and my friends lasted til 10pm then we gave up and came home! I'm going to vote that we have the 'do' the week before we break up next year because everyone was too knackered to enjoy it. I'd have the tables arranged in a huge square too so that we could all sit and see each other.
Right I'm off to make porridge for breakfast and then get cracking!! Have a good Sunday one and all.
Lots of love from
Rachel *still tired out* Radiostar xxx
Posted by Rachel Flowers at 08:50