Well Monday arrived and as I'd failed in my quest lotterywise to be a millionairess, I decided it was probably best if I go to work!
I didn't have my usual shower. No, I went mad and despite starting at 8am ( or just after as it turned out ) I had myself a bubble bath! 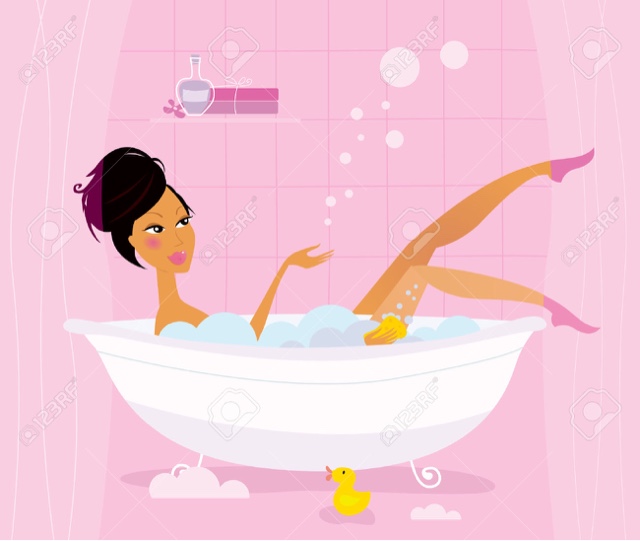 I don't know when Google Images sneaked in and took this photo of me! Or this one How outrageous!!
Anyway
It was lovely! I set my alarm and had myself 24 minutes. A bit of easy luxury meant I ( eventually ) got to work smelling gorgeous and feeling relaxed! I thoroughly recommend it! I was only a few minutes late due to faffing around with laundry! But as I work ten minutes for free everyday I decided not to fret over it!
As a result, I think, of my bath, I was less stressed at work and it was a good day!
( I may do this every Monday. Today I'll be having a shower. )
The ones who make me laugh, made me laugh. Yesterday's biggest giggle came from a piece of work about being peaceful. The children had written on olive branches ways of getting along, forging and maintaining good friendships. As I was cutting them out for display I noticed the one that declared
" Quit being a jerk."
It just made me chuckle. Technically correct, just slightly inappropriate language!! I've left it there on the wall for all to learn from. Sometimes when dealing with these cherubs when they are being troublesome I want to yell at them
To quit being jerks ( and other stuff, slightly more sweary ) but of course I don't!! Imagine the parental lynchmob!
I have happier news to report! Also I think a slight mystery solved. Just as it came light and I was stood faffing with laundry I was watching one of my heavily food laden bird feeders, I saw a coal tit and a blue tit. Only one of each, but a start I reckoned. I could also hear someone rather indignantly shouting his beak off. I shifted slightly in my stance and there, right in the middle of his suet filled kingdom was a fluffed up, most indignant, ferocious fat Mr Robin! He was shooing away the little group ( I could see more ) of assorted tits! He rather begrudgingly allowed a coal tit to grab a black sunflower seed - something that he doesn't even eat- and fly off to the safety of the other fence! Indeed I saw Mr RobinRedbreast  blatantly IGNORE his own specially designed Robin feeder filled with specifically bought Robin food to gorge himself on the suet nuggets!
Now I know robins are famous for being territorial with other robins, often fighting to the death, but not with other birdies. So I cannot put all the blame on NDFC after all!!
I'll keep an eye out to see if my family of sparrows come calling. I'd love a chaffinch or two. I love chaffinches.
Tea was leftover chicken curry for me and the menfolks had fishfingers and actifry chips and peas! I always like easy teas on a Monday. I only had leftover curry because Miss 21 is in Newcastle with the beau for a few days. She came in from work on Sunday and then went straight out without her tea! So I had it ! Day old curry is always nicer than on the day. Because she knows how I love them and because she is a darling, she sent me some photos of Fenwick's Windows! The theme wasn't clear but she tells me it's 'When Santa got stuck up the chimney'
Not so clear but here you go, if you can zoom in you can see the exquisite details. 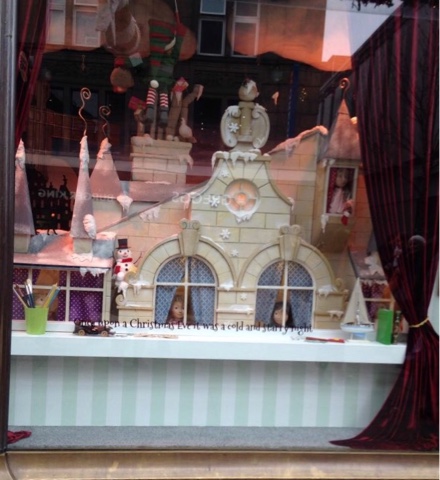 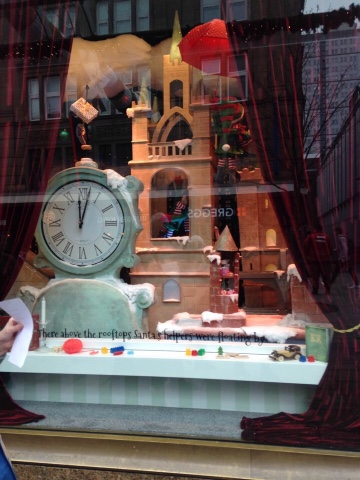 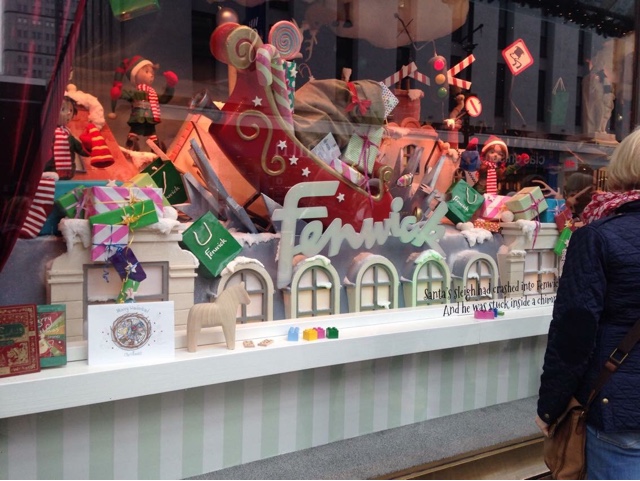 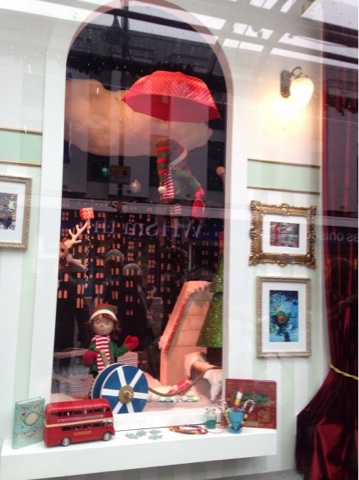 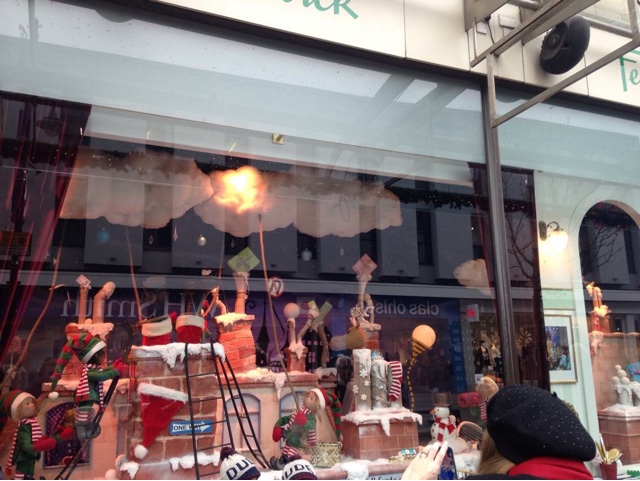 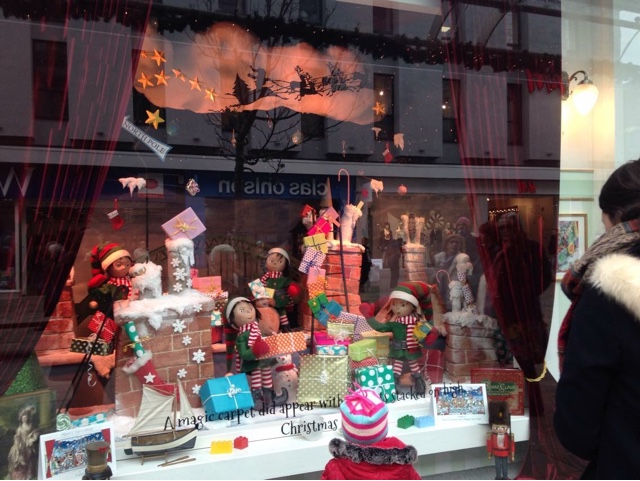 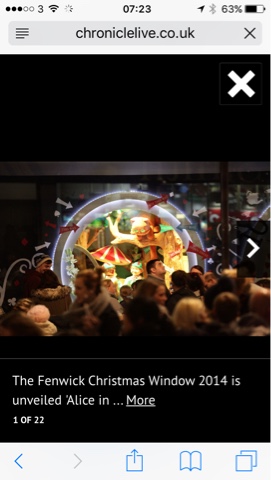 Look at all the people!!
I wish I'd seen this one for real
Gulliver! Just wow! 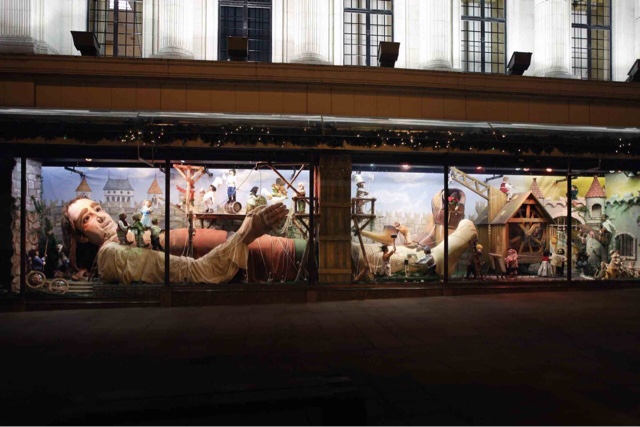 I wonder what they do with all the stuff once it's done with?
Ah well, it's time to go get my wriggle into gear for work and make sure Mr 18 is up! He's loving his job. I just thought he's half a Centuary to go, I wonder if he'll still love going to work then!
I cannot wait to retire!! I do love my job but I do love my time when its all mine to do with as I wish!
Lots of love from
Rachel *rambled on a bit there* Radiostar xx
Posted by Rachel Flowers at 07:32