The Itineray was packed! Wednesday

Here, at last, is a wee snapshot into the London trip. I think I'm just about recovered. Still needed a four hour nanna nap on Sunday afternoon though!
Wednesday
We caught the 7.38am train. By 7.39am the class were eating sweets and delving into their packed lunches! It's an unwritten rule! They were loud,excited and giggly! They needed the loo by 7.40am!
The next two and a half hours zoomed by   punctuated with the obligatory
"How far is it now?" Type questions. Eventually it was 10.12am
Us FF ( I deemed us the Fab Four for this blog post - the adults ) ramped up the teachery voices as our charges were instructed to make sure they had everything, put on their hi-vis jackets and stand in their groups!
We then set off up the four mile slog up Euston platform. Even though the 28 bladders on legs had been using the train toilet continuously for the past 2 hours we decsended en masse for a FREE wee on the station. It was compulsory. Even those who protested were sent to try.
We didn't know when we'd be near any facilities.
We then set off to find the Youth Hostel. I knew we'd be on the deathscalators in a matter of seconds. I was brave and just Got. On. With. It. The FF were chorusing HOLD ON, ONE BEHIND THE OTHER,WATCH WHAT YOU ARE DOING and STAND ON THE RIGHT constantly.
We got the Jubillee Line to Canada Water where we got off and set off in the wrong direction! Eventually we found the canal and followed it to our destination. What a lovely place Rotherhithe is. Us FF were discussing house prices! The 28 just carried on chattering! Half an hour later ( which should have taken half of that )
we arrived safely at the hostel but they weren't ready for us yet. So we locked all our bags in a secure locker. Took our lunches and set straight back off into London because we were due on the London Eye. We discovered via the Hostel staff that a simple five minute walk straight down the road was the overland station which we could catch to get back to the tube!
Within five minutes we were on the train and one stop one minute later we were back underground on our way.
The FF did get a bit stressy and screechy, each of us making sure our 7 fluorescent bodied beings got on and off! But we made it to Jubillee Gardens and ate our lunch in glorious sunshine. 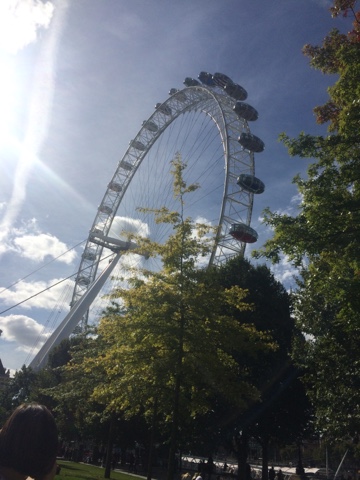