Hamster Search Squad can stand down!

Of course after my initial ranty rage post I was worried for little Theo. my house is a dangerous place for a little hamster!
We put piles of food down in rooms and closed the doors so tomorrow we could perhaps see where he'd been. There was the worry that He'd be upstairs, yet all the food would be gone downstairs....
( whispers 'mice' )
Anywayyyyy
No need! I found him by almost stepping on him. Upstairs. On my landing which is a big step up from Miss 21's landing. Up a big step that Miss 21 claimed he couldn't climb! He wasn't there when I walked into my room, yet two minutes later when I reopened the door with an armful of clean towels to put away in the landing cupboard, Theo appeared as if from nowhere!! Miss 21 was hollered and she came and scooped him up to safety! Where he was was a very big drop through the banisters down to the hall. It doesn't bear thinking about!!
I'm so relieved we got him back! 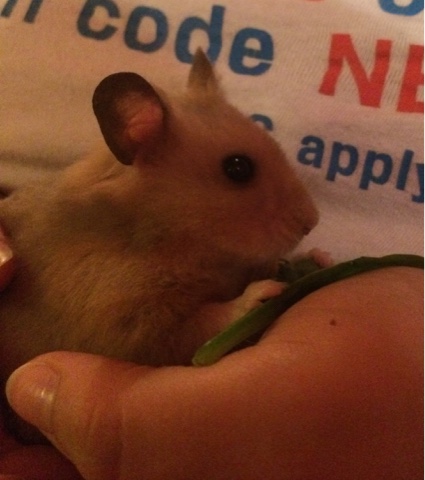 Here he is having a reward of a fresh spinach leaf. His reward is that he was found! Me? I'm up for mother of the year!! Miss 21 lives to try n make it to 22!!!
Lots of love from
A MUCH happier
Rachel * will sleep easy now * Radiostar!
Ps only I would have ever found him this way as there's only me who know the secret to putting the clean towels in the cupboard! Everyone else in the house must think the elves do it!
Posted by Rachel Flowers at 22:14