Today's post has been highly influenced by this one.
Go read it - go on - click the link and then come back. I'll be here waiting.
http://batsby.blogspot.co.uk/2013/04/a-touch-of-class.html 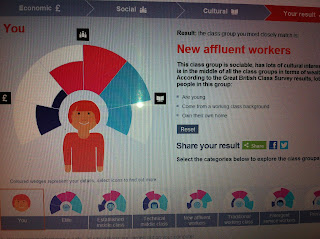 According to the official and therefore it must be true test, I am newly affluent?! You what? It sounds like a hideous disease.

I am NOT averagely aged at 44 - cheeky bar stewards. Eternally 28 me.

Apparently I am sociable -   I am - lots of friends!! But also I lean towards hermitdom.

I  have lots of cultural interests ( like what Mr Test? )  and sit in the middle of all the groups in terms of wealth:I am sitting in the middle of a messy bedroom scrabbling stuff together to sell at the CarBoot because I have NOT ENOUGH WEALTH.

So I truly pity the poor buggers either side of me - if the ones just above are judged 'wealthy' in monetary terms, the rich haven't as much money as I thought and the poverty stricken ones to the other -  is anyone REEEALLY poverty stricken in this country? I class the families living in tin shacks on the Comic Relief videos as poverty stricken. I don't class people who spend all their money on drink and drugs who then have no money left to heat their homes as poverty stricken. They had the money in the first place. Choices people.

Ok, we pay  do the mortgage and feed ourselves. All the bills are covered. But that's it. Not much to spare. Unlike many of the hyenas and their offspring at school, we do not go on holiday abroad at least once a year. ( I CHOOSE to holiday in the Great British Isles because I love it here. ) But it is a struggle to find the money for it. It's only thanks to being made redundant we finally got with it and have a shiny new flat screen TV, that these non working parents and series of 'uncles'  have had for years. All the children seemed to have got Laptops and Tablets this year and that's as young as the seven year olds! I was erm 28 when we got our laptop!

Umm ok I am lucky compared to some. I am wealthy in other means - I was supported by two hardworking parents  who had very little money but I  had a good childhood which in turn has led me to be a successful parent I think! Girl child at Uni, boy child on way to Sixth Form. I'm digressing now - what IS enough wealth? Apparently £53 according to a lot of tweets  right now- or not - depending on which side of the fence you sit.

"This youthful class group" is economically secure, without being well off - well the first bit is true. The last bit is a downright lie! Who the hell is secure these days?? We are always being told at work that money is tight. So I suppose security lasts for a month at a time in my house.

Anyway my Beloved Nanna taught me it was vulgar to discuss money and make personal remarks. So I will stop it!


I suppose I do have  high scores for emerging culture, such as watching sport, going to gigs and using social media - without it I'd be Batsbyless!  Emerging culture???? What numpty dreamt that phrase up?? Sport = the rugby. F1 and the Wimbledon men's final. Social media - well here I am! I am hooked on Twitter. Watching the above on TV is massively enhamced by it and the Olympics Opening ceremony was amazing! Of course I only follow highly entertaining people - which makes it! Facebook saved my life a few years ago as gave me something else to numb my brain with. yes, I played farmville. Planting cartoon carrots, asking people to send me cartoon nails to fix the cartoon shed roof . Also FB has put me back in touch with so many old chums and new friendships have been forged. Sure, there's enough cranks on there to sink a ship, but that is what the block button is for. At the moment - I barely go on because of the way they changed the layout and it's full of mindless " Like if you love your kids" memes. EEEEERRRRRGH I hate that word. Meme. Who the blinking flip made that  one up too?

Seriously we decided that as things were tight ( see above) we would remain gigless for this year - and that includes my ultimate favourite band on Earth, Muse, who are touring and also The Killers. Old habits die hard and I was on the laptop the minutes they went on sale and for both gigs I had the tickets in my basket. The HG was no help. No willpower at all as he helpfully said,
"It's up to you dear."

Arrrgh I am a gig addict. It took a lot of steely determination to close the window and give up the tickets. Those tickets are like gold dust and I just let them go. *sobs*
They were a lot of money. We have a child at Uni who we are supporting. What if she needed us and we couldn't go becuase I'd spent the petrol money on a Muse ticket? ( On my shoulder the little devil was saying she'll be ok! ) So we are not going. I have my memories and photos of the last time I saw them. but the buzz and the adrenaline is so pulling! I have even not gone to see the very funny Josh Widdecome who played the theatre in town. ( OOh see I DO go to the theatre! ) Last time was to see Jenny Eclair!  She was hilarious!
( I have been searching for Muse tickets  everytime I go online a few times since! But I've never bought any. ) *sigh*
Giving up gigs is as hard as giving up crisps. Five weeks three days now in case anyone is keeping tabs.

"I do not tend to participate in highbrow culture, such as classical music and theatre" - no because it's poncy!! Except Grease the musical was top class! Does that count? I do own several Andrea Boccelli CDS. Also Jenny Eclair.

"People in this group are likely to come from a working class background" <<<< tru dat.

Again - it's almost as if they monitored my IP address and tailored it for me ergo I believe it all!

Now then as for the REAL class system devised by Mr B - I still maintain that I want to eat Swans. When will I be a Lucky f*cker? ( You must read the blog link above to understand this sentence! ) Warning - it contains the full version of the eff word! )


It's all a load of ball cocks anyway! As the late great Gloria Gaynor sang
I am what I am. What about you?
Posted by Rachelradiostar at 12:04