Honestly. But before you all think I should probably brain him with it there are a couple of things you ought to know!

I’m not particularly fond of ironing, never have been, though I’m at my most likely to iron when I’m angry - usually at the HG and I will do bad tempered noisy ironing in a look at me, I do ALL the things, kinda way.

Mostly, with the advice and blessing of my Ma in law, I smoooooth things!

I already have 3 irons. One is a giant huge beast that sits on its own steam tank, I’ve had it a good few years now. It probably needs dusting. I’ve a smaller Morphy Ruchards that’s in my craft room along with my teeny tiny hand sized Prym iron, oh and I’ve one of those super teeny tiny Clover irons that is about the same size as a 50p piece with interchangeable heads that fix into the wand - about the same size as my Mum’s old Braun Independent hot brush! ( Remember those ??? ) for someone who doesn’t iron regularly, it’s a lot of irons hahaha.

ANYWAY THIS IS MY NEW BEAUTY! I’ve wanted one of these for so long, ever since I saw it on a craft show. It’s originally from America and you couldn’t get them here. The beauty of it is it lifts up when you take your hand off it! Meaning so easy and safe to use when I am sewing! Yes it’s for sewing purposes mainly. My little Prym one sits on a silicone mat and does turn on and off fairly easily but it’s light and I’m always worried I’ll knock it off my little stand I have next to my sewing machine and it gets SO hot I’ve burnt myself a few times! Also it’s got the world’s smallest water reservoir for steam. My Morphy one too has a silicone mat but I dislike leaving it plate down on there and sitting it on its heel, in the traditional manner means it is unstable!

I sound like I am justifying myself! But they are my perfectly logical reasons for wishing for this! 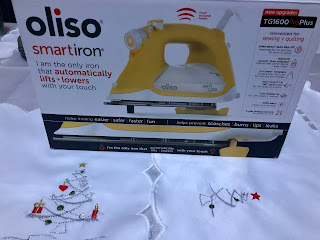 Also he bought me a new wool ironing pad too. Me and him made a portable ironing pad years ago and it’s done me in good stead, but this is the Bee’s knees! 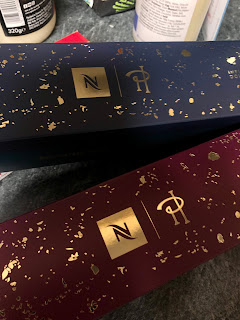 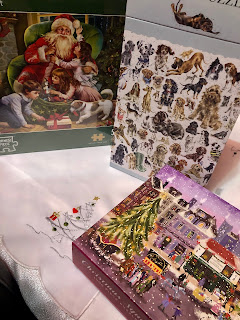 I was also lucky to get 3 lovely new jigsaws amongst my presents and some festively packaged coffee pods - one of which I’m having now as I blog. It tastes fruity! On closer inspection, it’s  got raspberry in it! Not sure yet, but I’m drinking it! I often suggest they buy me some coffee pods for my machine when asked what do I want for birthdays or Mother’s Day etc because I love to enjoy a lovely frothy coffee and think, my kids bought me this drink!

I’m sat here betwixt two sleeping spaniels. They were so funny yesterday, especially Bluebell who thinks every thing new in the house is for her! ( That is because it generally is ). When we got up and discovered Father Christmas had been ( ok, we had to put the presents out Christmas Day morning because she’d have been into them for sure! She was dancing about, tail wagging non stop, kept going sitting in front of the tree like the goodest girl and then squeaking at us! Her and Freddie got their presents. He opens his so gently and carefully. She goes at it like a frenzied piranha attack. She then parades her new toy around and around and then invariably goes and pinches Freddie’s and goes around with both presents in her mouth! He is so patient and doesn’t bother!

I cooked the dinner and my Yorkshire Puddings were magnificent! We didn’t have Turkey, by choice. We had roast beef instead. I ordered a large piece from the butcher but chopped it in half and froze half for end of January.

We had chicken liver pate on toast to start.

And despite me declaring it doesn’t go , I did do some shredded stouts with bacon and chestnuts with the chopped sprout tops. Nice but didn’t go but everyone had some!

Mashed potatoes, steamed broccoli with a homemade cheese sauce on top and wonderful gravy! I turned off my smart meter display yesterday! Might take a sneak look back tomorrow! 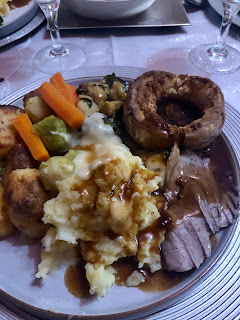 Pudding options were Christmas pudding, a cheeky Arctic roll or the one that everyone went for ..meringue nest , tinned mandarin oranges and lightly whipped double cream. I didn’t have any. I was too full. I’d washed up as I’d gone along with some bits and the dishwasher took care of the rest. I never mind the washing up after. I like to stand after a big meal, in the quiet kitchen with carols playing and just tidy up knowing everyone is fed and happy and settled in the lounge. I was all done and dusted just in time for the King’s Speech. It sounds very alien on the tongue. I thought his message and the footage was apt and wonderful. I got a little bit teary when it ended with the choir singing because my Ma in law ( who has mixed dementia) had been a little quiet - sometimes the art of conversation has left her - sang along to the carol word perfect. I remember my beloved Nanna would do that well into her dementia. So moving. We had the fire going and then we watched a really good Christmas film where this office worker tries to organise a party for all the people in his train carriage on his daily commute. Some big name actors were in it too and it was one we all enjoyed.

We squeezed the tiniest plate of ham, pork pie, cheese and beetroot in about 6.30pm. They were like Borrower’s proportions and no one wanted anything else after that! We watched The Wheel and then the Ant and Dec game show. The HG  and I then took his Mum home. Settled her in, gave her her meds and came home. We watched the new festive Motherland then left the kids and the dogs to it and went to bed and fell fast asleep!

This year I made hampers up for gifts and put in nice everyday treats like individual sponge puddings and little pots of deluxe custard so they can have a nice midweek pud and think along the same coffee lines of Rachel treated us to this. Pontefract cakes, chocolate biscuits, ham, sachets of hot chocolate etc they were fun to do but a right pain in the arse storing it all before making them up and gifting them out! I also got Ma in law a new hot water bottle but it had a furry muff pocket on too, half the size of a normal bottle one. So it sits neatly in the lap and she can put her hands in it to keep them warm! She suffers a lot from cold hands! Best present finder me! The kids got a few tokens - new pjs and smellies but we gave them some money. I say kids - both too old now for my liking! I bought the HG a new leather bag for going away overnight with. Some new t shirts, smellies and sweets.

Boxing Day now - the kitchen is all tidy, I’ve put some things tidy in the dining room and the washer is on. Boxing Day dinner for us is ALWAYS leftover cold meat, homemade real chips and the gravy. Then it’s everyone fend for themselves as I close the kitchen! There will be a dog walk at some point and just relaxing! I may even crack open one of my new jigsaws!

Ps. Wanted to share one of the cards I got from school. Now I’m not in a class as such, I now no longer come away with 30 plus presents of all shapes and sizes and I’m absolutely fine with that! Instead I get a few things gifted from the families I have been working with and these gestures mean so much. This card this year made me smile and hold it dear. I don’t teach this little one in class and wouldn’t have expected anything as an outsider would say the minimal support we have given was negligible but it just showed me what tiny things make a big difference to some people. And the things I’ve done with her are tiny in reality - always a smile and a greeting for her on the corridor - the treat of being allowed to eat lunch in my room ( I say mine - it’s me and one of my best friend in the whole world’s room - it’s our Nurture room and we have it set up so cosy, with toys and a sofa and a kitchen. We lay the table with the table cloth and mats for lunch guests etc )

Anyway, clearly it made a difference! 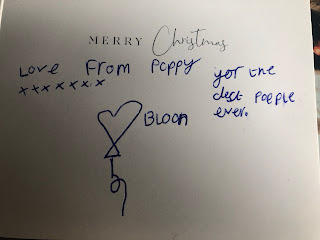