And that’s it for school!

Only for two weeks and a couple of days but it is very much much needed!

Friday night, was the staff do, I had other plans. Including sitting on the sofa by the lights of the tree! We’ve a lovely lively bunch of party goers who are good fun. So let them play and home I stay! 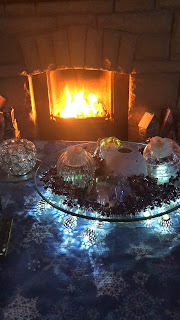 I’ve got my coffee table in the middle of the room, where one could argue it should always be! I’ve changed my decorations round a bit and if you squint carefully, you can see the tribute to M&S on the hearth!!! I seem to be collecting those pretty tins haha. I should have lit my candles but I need some more of those button batteries to work them.

We had chippy tea - the price has really gone up - £10 for fish and chips! I shared a Yorkshire fish cake with the HG.  I ‘won ’ a festive £5 voucher off my next purchase. The shop are running a giveaway promotion! They bought £100 £5 vouchers and were popping them in lucky orders! Glad Mr 25 checked because I’d not seen it! Come next year, the next time we have them, That will pay for 6 chips and a fin! They were delicious  and we ate them on our knees in front of the TV! We started catching up with Emmerdallas as we call it. Moora ( cow farmer lady ) as we call her, had clearly had her annual leave, was so tanned despite supposedly being in Belfast for two weeks! It’s set in Yorkshire, but Moora is Scottish and Amy is from Newcastle and both lay  the accent on so thick! The storyline is so outrageous that I must say ‘as if’ about 250 times an episode! But we keep watching - however I fell fast asleep and missed a lot! Woke up, the fire had died down and we went to bed. Thought it must have been midnight - nope 9.15pm!

So the HG was at home on Thursday and decided to do some plastering. He’d forgotten how messy plastering is. When I walked in at lunch time I was faced with dusty footprints everywhere! The kitchen floor was covered as was every Sur car, including the rugs I’d only just washed. But the ceiling looked lovely, as did the bulkhead of the stairwell. So as I left he was starting to clean up. When I got home after work, he said, do not go out the back door. Now here we have been enjoying seasonal temperatures of -6C and -7C with it never getting above 0C for a week, so it was pretty treacherous out there anyway.

Well,  he mopped the kitchen floor and in his wisdom not really thinking brain, thought, ooo I’ll throw the warm water out the door and melt all the ice!

He said he could see it in slow motion as the water was landing and freezing solid in front of his eyes! It was EXACTLY like home alone out there! So Bluebell has had to slip slide her way to the grass to sniff for bird footsteps and cats etc as we’ve clung on to the back door, balancing , to watch her!

Yes day lunchtime, the temperature reached a balmy 1C and it started to freezing drain! This adding a layer of jeopardy to everywhere !  I put some dishwasher salt down on the front step but have to then rinse someone’s paws because I don’t want her licking it! She never went on a walk yesterday because it was too dangerous. But not it’s been raining in the night as it’s about 4C so the big thaw is on! Everywhere has looked so pretty. Back to safe old dull and grey- but dull is frankly better Christmas tree light wise!

I think we are in for some milder weather. Which is good. On the 21st, we are having our new smart meters fitted. I’ve definitely been more mindful of our energy usage and my friend, who’s bills are similar to ours, said she’s been running £14- £15 a day when she’s washed, dried and had the dishwasher and heating on. We’ve a good bank of credit and have definitely been mindful of when we use it. I said yesterday though we didn’t put it on until much later thanks to the milder weather we’d had so let’s be chuffing warm! I feel for those who are not fortunate to be able to have that.

So it’s now 7.04am on Saturday and I’m going to make a start on the day. I’ve a few loads of wading to tackle, presents to wrap and cards to write. I’ve some shopping coming between 9 and 10. Not much. £100 goes nowhere really beyond the basics and there’s a bottle of de icer and some goose fat that wouldn’t normally get bought. It’s a stay at home day, mr 25 will walk Bluebell so I can get on. The HG seems to have picked up manflu but his task is to find a rail to go over the archway ( we have through lounge diner ) and I’ve decided that a temporary curtain needs to go up to keep the lounge warmer. We have a big house and the fireplace in the dining room despite being blocked off does let a cold draught in!

Anyway I’m off for a shower - I can’t do it in 4 minutes like some fugal folks can! I’ve just remembered the HG is off out for a catch up with his old school chums tonight so me and Mr 25 will have the Chinese chicken curry I made and froze last week! What a treat!

Saturdays - Love them. First Saturday after breaking up from school? Seems even better! I will leave a few photos here, two of part of the tree, unlit and lit and two of Madam on Wednesday lunchtime- she was most disgusted to be wearing her fleece but it kept her cleaner and drier than without. Once on the field she really didn’t mind it! 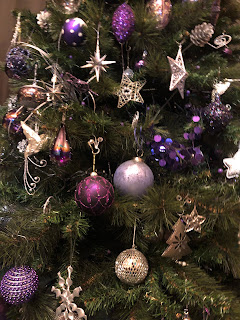 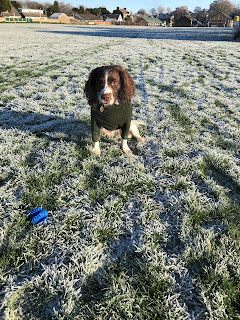 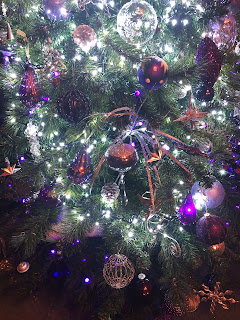 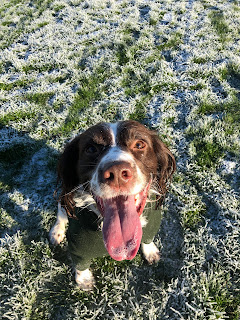