I wrote that on Wednesday evening I felt the worst I've ever felt and it was no exaggeration. Thursday I woke up and took a cold and flu remedy tablet and I noticed again, I felt a little better. ( The magic of medication! ) I didn't really do much yesterday at all. I did find the strength to chuck some frozen carrots and onions into a pan, along with the slightly aging minced beef from the fridge with some stock and let is simmer away. I added a few scabby potatoes peeled and diced a bit later on and when they were soft, I thickened the gravy and made some dumplings with some wholemeal flour and we had a dish of mince and dumplings ( which is what they have in the NE -I've never ever had mince n dumplings here in the NW ) and I was stuffed to the gills as it was the most I'd eaten all week. I was also jaded after the efforts of making it. There's loads left but my freezer is stuffed to the gills - I will have to do a bit of juggling around to bag it up and squish it in for next week. When I was under the influence of the lunchtime cold and flu tablet ( same ingredients as a lemp sip type hot drink but far more palatable for me ) I did a little knitting and put on this film which is based on a true story and I was

simply charmed by it darling.! 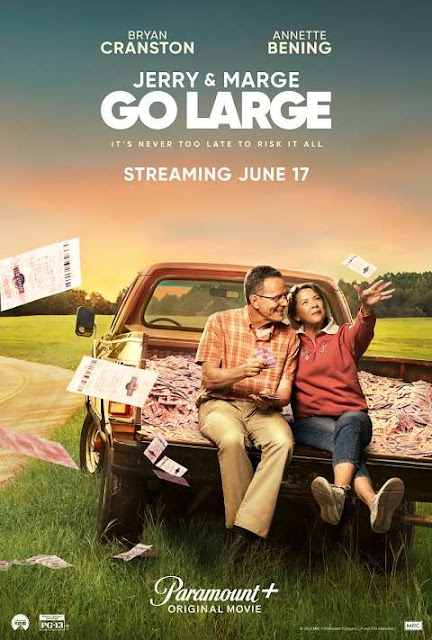 We get this channel as part of our new deal with the TV/Internet package we changed to. I don't even know how I found it. I'm not liking the new remote but this film was blooming good! I had to watch it in two bits because I got tired and trying to decrease for the raglan sleeve was hurting my brain too so I still need to do some more of that later.

I am hoping that by Monday I will feel well enough to go to work. I'm coughing as I type and woke up at 1.15am with a sore throat ( a little self indulged dumpling heart burn ) and because I sneezed, a concerned Bluebell almost on my head. I've a strange taste in my mouth that I can't shift either. Covid is bloody rotten. There are folks at school who I know will be scathing of me being off with just a 'bad cold'. Well they can scathe off and when they get there, they can scathe off a bit more.

I've not made any more ornaments yet but might have a sit at the machine tomorrow and if it's a bright day maybe photograph what I do have on my holly bush!

The Covid Jigsaw is making slow progress. I am going to scuttle off back to bed now with a cup of plain boiled hot water because the taste in my mouth is distorting everything. Maybe I will be popping by some blogs and commenting later. I might do a read along of a chapter of my book with audible. It's like being at school and helps the covid brain work a bit better!

Must cancel our appointments for our boosters tomorrow. Oh and my poor Ma in Law has now tested positive for it. It's her first time of having it. We are feeling utterly wretched because we probably unwittingly infected her on Sunday when we called although because the HG felt off it, he didn't go near her but still. It IS everywhere. She has carers who wear masks and protection who thankfully are still going - she had mixed dementia though is really good on some days. My sister in law is doing a smashing job of looking after her also - she goes daily to ensure she has a cooked meal at midday - the carers are really to ensure she takes her medications correctly and also a friendly eye and a chat. I am hoping that she only has a mild dose because I'm sure she did just have her 4th booster. I certainly do not wish my symptoms on her. I wonder if my experience is made worse because I have the guilt of not being at work when I should be?