Hello all.
Please read this at a distance of two metres because I'm coughing merrily away.
It's the start of day 4. I'm not well enough to be at work and won't be in tomorrow either. I am missng lots of important work with my childers and a big Governors' meeting tonight plus a free tea! Plus I am missing working the after school club with my friend who has been off for the last 6 weeks with torn ligaments!
Covid - so much to answer for.
Up til 5pm last night I'd been saying that while the symptoms have been very similar to round one, they've not been as severe.
Monday wasn't too bad, cough and headache.
Tuesday - coughing gave me such a headache, plus fatigue - I spent most of Tuesday in bed asleep.
Wednesday - morning - dared to glimmer hope - didn't feel quite so rough. It was Covid judt playing a trick on me because....
5pm last night - it was horrendous. Full on absolute illness.  Sneezing, aching, really painful joints, coughing and generally I felt so miserable and angry and weak.
I drank a lempsip ( supermarket's own - same ingredients, 50% cheaper ) and moaned my way through it. I slept 9pm - 3am. Then went straight back to sleep until the radio went off at 6am. Am now up ish, had some paracetamol and a with a hot cup of tea - ventured into blogland whilst I can be bothered. I've not done anything much at all during my waking points. Managed this though one day! 6/6 games won!

Cannot be faffed with anything. I've caught up on Handmaid's Tale. Still enjoying it and watched a couple of episodes of Modern Family form the very beginning. But the laughing started me off coughing so I switched it off! I absolutely love Modern Family. The writers know exactly what they are doing and it's just a brilliantly funny TV show. I think I love Mitch and Cam the best but Phil Dunphy is class too.
Poor Bluebell is having to make do with me throwing the ball for her up and down the back - not that she doesn't complain - it's more me .The menfolks have been home soaking wet every night - the rain has been non stop here - the garden is swamped. I really dislike November weather. it's mild though which is helping during this energy crisis. Thanks for those comments by the way - a new meter and a smart meter is being organised.  Only had the heating on twice to warm the bathroom for them both a shower when they get in from work. We did have a fire on Tuesday evening. 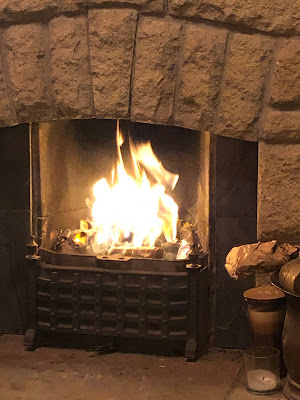 I buy coffee logs to burn. Quite economical and a few just lasts us each fire. I did use nearly a full box of matched to get it going - the matches were rubbish - I thought's bought long ones, they were short and cheap. So cheap some of them were just sticks of wood!
Today I am going to rest. Drink plenty. Keep up with the paracetamol and try and read a chapter of my book and put my new boots on in the house to wear them in.
Happy Thursday everyone
Lots of love from
Rachel * wearing tena lady due to coughing* Radiostar xxx
Posted by Rachel Flowers at 08:23