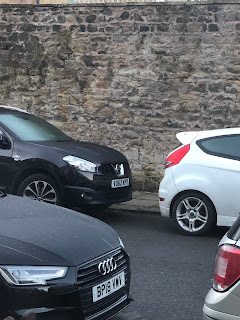 Argh photo on wrong place! See below!
As the great Monty Python sang! Every comment I make and all comments incoming are ending up in spam! Not sure what is going on.

It’s Sunday 2nd October, just me and the dog are up. Sat in the dark with a brew and it’s lovely and quiet. I was woken early hours yesterday by horrific symptoms which kept me confined to the bathroom for most of the day so now I’ve got really bad side and stomach pain from the continued retching and feel annoyed that not only did I miss my hair appointment and our daily plans to tidy the garden a bit more. I never stepped foot in the sewing room and basically took to my sick bed. My throat and voice is husky from the acid that came up and I’m tired.

Last Saturday and Sunday the HG and I were non stop busy with some decluttering and the HG did a beautiful job of repointing the gap between the wall and the pavement in an attempt to block the annoying weed growth. It’s all power washed too and I’m a bit houseproud of my clean pavement !! There’s a bit of an issue where I live of weeds being left to grow at the side of roads, infront of peoples houses and on the pavement. It looks a mess. The bees have plenty of flowers round here without the need for unsightly weeds and the buddlieas left to go out of control are damaging beautiful stonework too. I have a huge 12ft dry stone wall across from my house as it’s the outer boundary of a mansion ( slightly large detached house in its own grounds ) that’s now a housing estate. As a girl we said that witches lived there as it was very gloomy and dark with its trees and big walls and legend had it that of you went too close to the gates you’d be GRABBED by the witch and eaten alive! As a result, up until the age of say 10 years old I ran like the wind past those spooky wooden gates hiding the witches house in the woods!!!

She never caught me!

anywayyyyy me and one of our neighbours decided enough was enough. The HG and I tackled the big buddleia and the neighbour scraped off down the rest of the wall and the are looks 100% improved. I just wish the rest of the neighbours had some pride in their walls and got rid of the weeds!!! You can see the discolouration at the bottom.

I took one but it appeared up there!